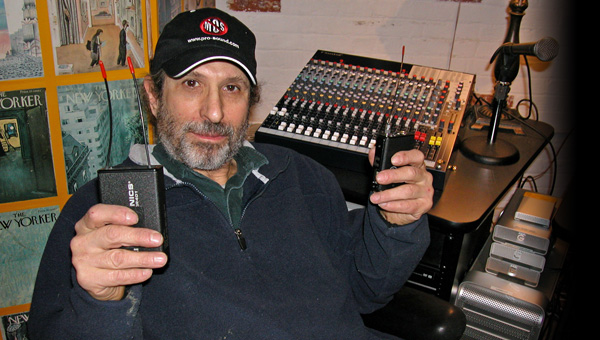 Westchester, NY – January 2013… Of all the audio challenges one can be confronted with, location sound ranks at the very top in terms of having to “know what you’re doing.” There is precious little patience for re-takes and, if the audio quality is not up to the level it needs to be, the added expense of ADR (automated dialog replacement) ups the cost of production even further. Such is the life of location sound mixer / engineer Joe Cantor. To ensure he delivers the best audio quality possible—with minimal down time—Cantor relies on wireless microphone technology from Rio Rancho, NM-based Lectrosonics.

Operating primarily throughout the tri-state area (encompassing parts of New York, New Jersey, and Connecticut), Cantor works primarily in film, though he also has plied his expertise to television and commercial projects. He is, perhaps, best known for his work as Sound Director on Elah and the Moon, a story about the mysterious world of a boy named Elah, who seeks love from his father, Endymion, a carpenter during the 18th century in East of England. The film was screened at the Cannes Film Festival. Additionally, Cantor worked on the horror film Self Storage with Eric Roberts, Jonathan Silverman, and Michael Berryman, which will be released in spring 2013.

Recently, Cantor deployed seven UM400 Digital Hybrid Wireless® beltpack transmitters and two Lectrosonics UM200c beltpack transmitters for a forthcoming project with the working title Air Tight. On the receiving side of the equation, Cantor reports using UCR201 receivers as well as UCR411A Digital Hybrid Wireless Compact Receivers. A project of Hedge Industries, the film involved nine wireless channels and was shot outside of Saratoga Springs, north of Albany, NY. Air Tight is an introspective look at three men who are supposed to be friends—but when Bradley and Connor conspire to kill Ronald, who is crippled, matters take a rather unexpected turn.

When queried about those attributes that made his Lectrosonics equipment so essential in his line of work, Cantor offered the following thoughts. “Upon first being introduced to Lectrosonics back in 2005,” he explained, “I was immediately impressed with not only the sound quality, but the ease with which I was able to identify available frequencies—even within the same block. The sound quality of Lectrosonics gear is stellar. I genuinely feel that the mic preamplifiers in the transmitters are exceptional. Secondly, the ability to quickly and easily use the equipment’s spectrum analyzer to identify available frequencies is second to none.”

“The fact that these units provide battery reserve information so that you know when it’s time to swap batteries is another huge benefit of working with this equipment,” Cantor added. “This feature makes a tremendous difference when you know which actor or actress needs a fresh battery and you can take care of this between takes as opposed to having to hold up production. Some of the takes we shot during Air Tight ran as long as 37 minutes. By knowing how much battery reserve we had left, we could easily coordinate battery replacements. You certainly don’t want to ruin a take 25 minutes into it by having to swap out a battery.”

Cantor was equally upbeat about Lectrosonics’ robust build quality. “This equipment is built like a tank,” he says. “No other department is at risk for abuse of equipment quite like the sound mixer because the actors wear the gear and you never know what might happen—including stuff that simply isn’t written into the script.”

In the demanding location sound business, when questions occur or when service is required, there is little time for incorrect information of a casual approach to getting equipment repaired. Again, Cantor had nothing but praise for Lectrosonics’ customer and technical support services, “I couldn’t be happier with the quality of the service and support Lectrosonics provides its customers.  I remember calling once with some questions relating to a project I was about to start and the support staff responded to all my questions thoughtfully and respectfully. I received answers that were extremely helpful—to ensure I got the most out of the equipment. The company’s support staff clearly understands how the equipment is used and, as a result, was able to offer valuable information. I was particularly impressed with the fact that the Lectrosonics support staff can tell you what frequency issues may exist in your area and how to address them.”

Before re-focusing his attention to an upcoming project, Cantor offered these parting thoughts. “The Lectrosonics equipment performed really well on this Air Tight. The client was very happy with the audio quality I delivered and just finished another project—and again, the Lectrosonics equipment performed flawlessly. My Lectrosonics gear has been a wonderful investment and has paid off handsomely in terms of me being able to deliver a product that I’m proud of.”

For additional information about Joe Cantor and his services, contact him at This email address is being protected from spambots. You need JavaScript enabled to view it..