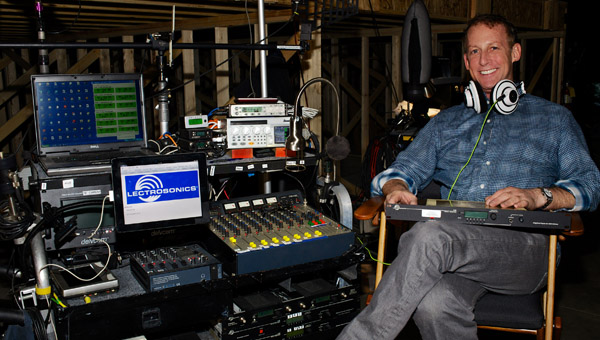 Las Vegas, NV – January 2013… In the world of professional audio, location sound recording ranks right at the top when it comes to challenging audio work. Given the number of variables beyond the control of the production sound mixer, such as surrounding noise and digital RF interference, and the fact that there is little time for experimentation, the necessity of capturing sound accurately the first time around leaves little margin for error. Such are the challenges on the various movie sets of Los Angeles, CA-based production sound mixer David Kelson. Armed with a large arsenal of Lectrosonics wireless microphone products, Mr. Kelson stays at the forefront of his profession.

Having worked in location sound for the TV and film industry since 1982, Kelson has amassed an impressive list of credits. His recent projects include The Walking Dead on the AMC network (American Movie Classics) and the TV movie Steel Magnolias. He is currently working on a feature film entitled Last Vegas with Robert DeNiro, Michael Douglas, Morgan Freeman, and Kevin Kline. David is best known for his flawless audio work on TV and feature film projects and his dedication to the craft of production sound. To ensure trouble-free performance in the field, Kelson relies on a sizeable assortment of Lectrosonics SM Series Super-Miniature transmitters, HM plug-on transmitters, two Venue receiver systems (fully stocked with VRT receiver modules), UCR411 receivers, and for his IFB / Comm system, a T4 IFB transmitter and R1a IFB beltpack receivers—all of which employ Lectrosonics’ acclaimed Digital Hybrid Wireless® technology.

“I’ve been using Lectrosonics wireless microphone systems since 1992,” David reports. “I’ve always been very impressed with the sound quality, rock solid build quality, RF agility, and compact form factor of the gear. I also augment all of my Lectrosonics equipment with the company’s ALP500 shark fin and SNA600 dipole antenna systems, which go a step further toward ensuring the range and dropout-free performance so essential in my line of work.”

Currently, on the Last Vegas project, Kelson has been using a combination of SM, SMV, SMQV, and HM transmitters with his two Lectrosonics Venue receiver systems, which are set up in true diversity mode, where two receivers are set to work with a single transmitter. He gave the example of a Steadicam shot that presented some real challenges on the motion picture due out in December 2013.

“There’s an evening scene in Last Vegas where Mr. Douglas and Mary Steenburgen are walking on Las Vegas Boulevard in front of the Bellagio Hotel and there was a phenomenal amount of RF interference from all the nearby shows in the area,” Kelson explained “I used Lectrosonics’ one-touch SmartTune™ auto frequency selection feature on the Venue receivers to identify available frequencies in blocks 21 and 22. Once we identified those frequencies and locked them in, we achieved superb range with terrific audio quality. We set the transmitter power at 250 mW per unit, and using the Lectrosonics amplified antennas, we achieved very strong signal modulation, a surprising amount of range, and no dropouts whatsoever. The gear really delivered.”

To communicate with his two assistants, Kelson described his private communication system setup, “My boom operator and utility tech each wear an SM transmitter that is outfitted with the company’s belt mounted mute switches,” he explained. “These transmitters feed a pair of UCR 400A receivers that are summed by a small mixer and sent to the comm-in feed of my main mixer. I use my Lectrosonics T4 IFB transmitter to communicate with their R1a IFB beltpack receivers. This is a closed loop system where all three of us can communicate with one another privately, on the fly, and it’s been very effective.”

In addition to his successes in the field with his Lectrosonics gear, David was equally complimentary of the company’s customer / technical support services, “I love the equipment’s build quality and excellent sound and range.” He mentions Lectrosonics’ support services are every bit as impressive. “Over the years, I’ve received absolutely boutique quality service. I recall one weekend afternoon when Gordon Moore, the company’s VP of Sales, actually spent time out of his Sunday to take remote control of my two Venue systems and assist me with a complex set up using the LecNet2 software.”

Before shifting his focus back to another day’s shooting, David summed up his Lectrosonics experience. “I couldn’t be happier,” he says. “The sound quality of my equipment is first rate, the build quality and reliability is second-to-none, and the company’s responsiveness is unparalleled. When you add in the flexibility one achieves with the many features and accessories offered, such as the RM remote—which allows my crew to change the various SM transmitter adjustments on the actors without touching their wardrobe, it consistently fulfills all my professional requirements. On a scale from 1 to 10, I rate Lectrosonics a ten in every category.”

For additional information about David Kelson, look him up him via the IMDB: http://www.imdb.com/name/nm0447093/.