Lectrosonics Gear Survives The Frozen Tundra To The Louisiana Wetlands 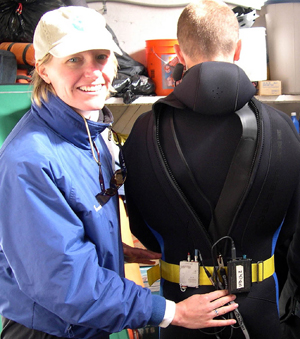 SEATTLE, WASHINGTON: Not unlike the mail carriers, neither rain, hail, sleet snow, heat of day nor dark of night can stop Lectrosonics RF equipment from working, according to Scot Charles, a field production mixer on the annual JASON Expeditions. For this year's expedition to the wetlands of Louisiana Scot once again fielded Lectrosonics transmitter, receiver and IFB systems for the educational program, which is beamed live via satellite to 1.7 million students in classrooms in North America, Mexico and Europe.

"All of the projects have been covered by myself or associate engineers with Lectrosonics gear," reports Scot, who has owned Lectrosonics RF gear for over 15 years and typically travels with ten of the 200 Series systems, mainly UCR205 receivers with a couple of UCR210 units. "I have those in my location kit with one of their UDM6 antenna amplifier distribution systems, so I can put up external antennas without having an antenna farm."

He comments, "The Lectrosonics equipment works really well for me, even in adverse conditions." Scot has worked in a variety of locations with JASON Expeditions that are potentially hostile to RF gear, including Alaska for "Frozen Worlds" (2002), the Channel Islands in California for "From Shore to Sea" (2003), and Panama for "Panama, Rainforests at the Crossroads" (2004). His Blue Charles Productions, a Pro Tools-equipped post-production suite in Seattle, additionally performs sound design and mixing on the pre-produced programs which are included in the JASON curriculum, the live programs also aired on The National Geographic Channel, in addition to the interactive satellite feeds.

For this year's "Disappearing Wetlands" program, Scot provided wireless microphone and IFB setups at two separate locations in the Jean Lafitte National Historic Park and Preserve in Louisiana. "They usually do a ten-day broadcast involving five live shows a day. Because we're working with scientists who love to dig in the dirt and dip into the water, it poses quite a challenge to the equipment, especially the wireless systems."

He continues, "I had scientists who were in chest waders out in the swamp. On two different occasions a scientist fell over and submerged a headset, which I had to replace. But I had rigged the Lectrosonics gear high enough on the body that my wireless systems survived the dunks."

Three or four "Argonauts" [students] usually accompany the host scientist. "We put sportscaster headsets on the scientists so they had both IFB and a mic. We also had IFB back to some of the student hosts. I used the Lectrosonics R1 receiver for that. And I hooked them up with a standard ear phone, so they could take direction."

Scot wired the "Argos" with Countryman B6 lavalier mics. "They're waterproof and easy to hide," he shares. "It rained a lot and was misty, but they never failed us."

The interactive broadcast was directed and switched via satellite from Microsoft Studios in Redmond, Washington by the Seattle based Media Arts Team and beamed live into classrooms around the world, where students posed questions to the scientists and "Argos" on location. The JASON Foundation for Education, which derives its name from the Greek myth of JASON and the Argonauts, is a non-profit organization that was founded in 1989 by Dr. Robert D. Ballard, who discovered the RMS Titanic and has led or participated in more than 100 deep-sea expeditions.

On the expedition "From Shore to Sea" from Anacapa Island in the Channel Islands off the coast of California, Scot worked daily with an underwater team. "We had mics and IFB through cables to their underwater masks. But as soon as they climbed out of the water for the on camera interviews, I would slap Lectrosonics MM400 transmitters and R1s on them in their dripping wetsuits. We did 55 one-hour programs from that location and I never had one glitch."

Indeed, Scot says that he is very impressed with his Lectrosonics gear. "They have been universally bulletproof and reliable." On the rare occasion when there has been an equipment failure, he says, "especially on location, Lectrosonics' customer service has been so good about sending loaner replacements and getting me back into business very quickly. They've really supported me."