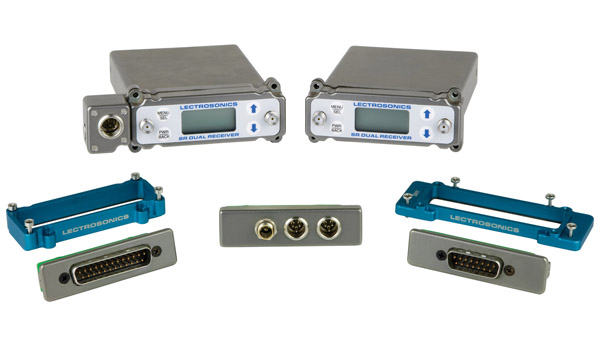 Rio Rancho, NM – November 2012… Lectrosonics, recognized the world over as a leading manufacturer of wireless microphone systems and audio processing products, announces the introduction of the SRB and SRB5P (domestic) and SRB/E01, SRB5P/E01 (export) two-channel slot-mount Digital Hybrid Wireless® diversity receivers. The new receivers offer two independent channels and fit into the standard video camera slots found on slot-equipped professional cameras such as those from Panasonic® and Ikegami® (SRB & SRB/E01) and Sony® (SRB5P & SR5P/E01) by using the appropriate optional mounting kits. The two audio channels can feed separate inputs or can be mixed internally to feed a single input.

A talkback feature is also included in the new receivers to work in conjunction with the HH handheld microphone transmitter. With the talkback feature engaged, one audio output is used for the standard signal feed. When the talkback button is pressed on the HH transmitter, the audio is routed to the second receiver output, which thus can be sent to an IFB (interruptible fold-back) system, a com desk, or anywhere else the user requires.

Two diversity modes are offered in the SRB family. SmartDiversity™ reception is employed by combining antenna phase for each independent receiver channel. Alternately, the two channels can be used together as a single receiver in “True Diversity” Ratio mode for enhanced performance in some environments. Graphic spectrum scanning provides quick and easy location of clear operating frequencies for interference-free operation.

The two independent Digital Hybrid Wireless receivers inside the SRB Series units offer 256 frequencies each in a wide variety of available frequency blocks, and operate with any of the Lectrosonics’ 400 Series transmitters without a compandor in the audio path. In addition, compatibility modes also facilitate operation with Lectrosonics’ 100 Series, 200 Series, and IFB analog systems, along with analog transmitters from two other manufacturers. Transmitter battery strength is monitored in the new receivers when using compatibility modes for 200 and 400 Series transmitters.

While mounted in a camera slot, the SRB family of receivers are splash resistant—thanks to sealed membrane switches and LCD, along with a special gasket covering the slot opening. Along with slot mounting, the receivers can also be mounted outside cameras using an optional kit, powered from external DC, and providing two locking mini-XLR analog audio outputs. Additionally, an optional battery sled kit is available, offering two balanced outputs along with the ability to dock a “M”- or “L”-style rechargeable battery pack for truly portable use. A variety of hardware mounting accessories are also available.

Gordon Moore, VP of sales at Lectrosonics, commented on the new receiver family, "We have been pleasantly surprised at the high demand and the wide range of applications for our original dual-channel slot receiver. Frankly, we never envisioned it being used in many of the ways that it has been. With that in mind, the new version addresses some of the issues brought up by users, particularly in applications where high channel counts are needed, such as reality TV production."

The new Lectrosonics Dual-Channel Slot-Mount ENG Receivers carry an MSRP of US $2,800 (SRB, SRB/E01) and US $2,985 (SRB5P, SRB5P/E01) and are available through authorized Lectrosonics dealers. Older SRA and SRA5P receivers or E01 export variants can be upgraded to the SRB/SRB5P (or E01 variants) for $250 at the factory or a Lectrosonics authorized service center.