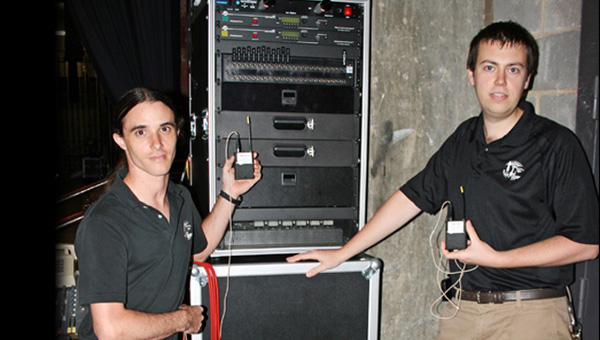 Robert Schoneman serves as one of Blumenthal Performing Arts’ Production Managers. With an emphasis on the production and presentation of touring Broadway attractions, live music, and theater, Shoneman’s responsibilities include day-to-day production management in the Belk Theater and, occasionally, at the Booth Playhouse as well as helping ensure consistency across sound systems and control equipment in all of the organization’s venues. Tasked with ensuring trouble-free performance from all the audio equipment used, Schoneman discussed the factors that led to his selection of Lectrosonics’ Digital Hybrid Wireless® technology.

“Our top concern for our wireless microphone equipment was sound quality—primarily noise floor and a lack of HF artifacts caused by analog companding,” Schoneman explained, “and that’s where Lectrosonics equipment really delivers. Since the wireless gear is frequently used in a theater directly adjacent to a touring Broadway production, it was essential the equipment be able to operate capably in a crowded RF environment and that the ability to scan for and select open frequencies be quick and easy. We’ve also been very impressed with the rugged build quality of the Lectrosonics beltpack transmitters. When you consider how this type of equipment gets handled during costume changes and so forth, it’s a very important consideration.”

“We purchased the Lectrosonics equipment to be used for two annual productions,” said Schoneman. “The Blumey Awards, which takes place in the Belk Theater is to recognize and reward excellence in high school musical theater and is a feeder program to the national Jimmy Awards in NYC. Charlotte Squawks takes place in in the Booth Playhouse. This show is a locally produced revue of local/regional/national events and politics. The show is best described as ‘Broadway meets Saturday Night Live meets Charlotte.’ All the actors wore their transmitters in NeoPax mic belts beneath their undergarments. Since everyone changes costumes for almost every number, we’re not doing any crazy transmitter placements, but it’s very reassuring to not have to worry about the equipment’s reliability and performance.”

When queried about factors that, ultimately, led to the acquisition of the Lectrosonics gear, Schoneman offered the following thoughts about Lectrosonics’ customer service. “I never once got a demo of the equipment,” he reports. “I knew after calling the factory and getting a live human on the phone (on my first attempt and who spent over an hour talking to me) that our shows were in good hands. Equally noteworthy, Lectrosonics sales associate John Muldrow was extremely accommodating about helping us meet some time constraints. I was very impressed.”

Before turning his attention to some upcoming production tasks, Schoneman offered this closing thought, “I couldn’t possibly be happier with the decision! Everyone—including the talent—who has heard the Lectrosonics gear has commented about how great it sounds. This is the first time I’ve ever felt like the RF mics ‘disappeared’ into the audio path.”

To learn more about Blumenthal Performing Arts, visit them online at www.blumenthalarts.org.