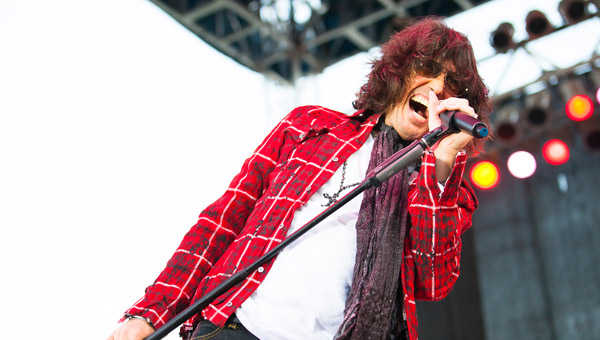 Rio Rancho, NM… With literally scores of smash hits, multi-platinum albums, and sold out concert tours the world over, Foreigner is universally hailed as one of the most popular rock acts of all time. The band has been touring extensively this year and, to ensure premium sound quality and dependable performance from their wireless microphones, they rely on Digital Hybrid Wireless® technology from Rio Ranch, NM-based Lectrosonics.

Albuquerque, NM-based Lorenzo Banda is Foreigner’s monitor engineer. In addition to handling all aspects of the band’s monitor system—including mixing—he is also responsible for the wireless microphone equipment used during performances. This includes overseeing lead vocalist Kelly Hansen’s use of the Lectrosonics HH handheld transmitter (equipped with an Earthworks mic capsule), keyboard player Michael Bluestein’s use of a Shure Beta 54 headset mic into a Lectrosonics LMa beltpack transmitter, and saxophonist / guitarist Tom Gimbel’s use of an AKG 414 microphone equipped with a Lectrosonics HM plug-on transmitter (for the sax) and the Lectrosonics LMa transmitter with MI39A cable (for the guitar). On the receiving side of the equation, Banda keeps tabs on Lectrosonics R400a diversity receivers and a Venue receiver mainframe equipped with VRS and VRT receiver modules.

“The Foreigner U.S. Tour 2012 started in February and continues until late October,” Banda reports. “We’re touring extensively and a considerable number of our tour stops include NASCAR and major sports events. In both cases, these types of venues are usually crammed full of wireless equipment, so RF (radio frequency) congestion can be a major issue. Fortunately, the ability to quickly and easily deal with this type of environment is one of Lectrosonics’ strengths. Lectrosonics’ one-touch SmartTune™ auto frequency selection feature on the Venue receiver system has proven to be invaluable. It works terrifically and makes the process of identifying open frequencies quick and easy. The system shows me everything that’s going on in the immediate area and enables me to select an available frequency without having to jump through hoops.”

Banda was also quick to point out Lectrosonics’ well-deserved reputation for audio quality. “Kelly’s HH transmitter feeds through the Venue receiver and the VRT module,” he explained. “Together, this combination is awesome and, in my opinion, is every bit on par with a cabled microphone. The fact that we get first-rate audio performance is a big deal to begin with—considering the negative impact on sound quality that competing wireless systems using a compandor can have. And secondly, the freedom that comes from using a wireless mic has a major impact on his ability to interact with the audience.”

In addition to sound quality and RF agility, Banda had plenty to say about Lectrosonics’ range performance and reliability. “I’ve been really impressed with the dropout-free performance of our Lectrosonics equipment,” he notes. “With Kelly on the HH transmitter and Venue receiver, which is augmented by two Lectrosonics ALP500 log periodic dipole array antennas, he goes way out into the audience and I’ve never experienced a dropout. In all honesty, it’s not even an issue I have to consider. Likewise, all the Lectrosonics gear is built like a Mac truck. We travel the world and in all the time we’ve been using this gear, I’ve never, ever had any issues. Lectrosonics’ durability is, in my opinion, unsurpassed.”

Freedom of mobility was an equally import consideration for keyboardist Michael Bluestein. “Michael’s keyboard rig is spread out,” Banda said. “To ensure he could move among the keyboards effectively and still handle his vocal responsibilities, a wireless setup was absolutely essential. The Lectrosonics system meets these requirements really well while delivering great sound quality.”

“Tom (Gimble),” Banda continued, “is a long-time Lectrosonics enthusiast. He’s positively obsessed with the accuracy of his sound and, as a result, is constantly searching for new equipment in order to improve it. Over the years, he’s tried every imaginable wireless system on the market and Lectrosonics is his favorite. These days, he absolutely insists on Lectrosonics wireless.”

As he shifted his focus to prepare for the next leg of the tour, Banda concluded with the following thoughts, “My Lectrosonics experience has been absolutely positive. Our dealer—Bananas at Large in San Rafael, CA— has been very helpful and I’ve also developed a great rapport with Lectrosonics. In terms of customer service, the company treats me like family—and that’s a crucial consideration for any touring act. When I need answers, I need them ASAP; and that’s exactly how the company’s customer and technical support departments handle their business. Lectrosonics always make us feel special. I can’t emphasize how important that is. Karl Winkler is always there to make certain we’re being taken care of. I have tremendous admiration for the company and all the people who work there. We look forward to having a long, fruitful relationship with Lectrosonics.”

To learn more about Foreigner and their current tour, visit the band online at www.foreigneronline.com.