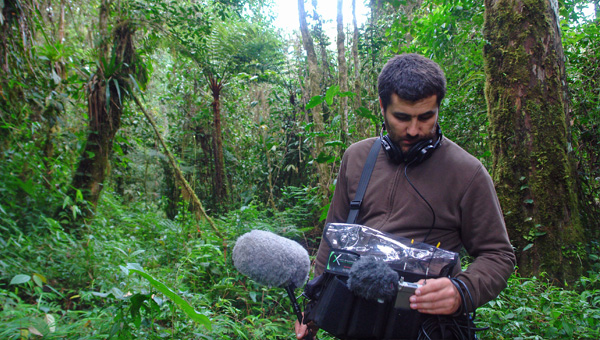 Maracaibo, Venezuela… When you divide your time between residences in Bilbao (Basque Country of Europe) and Maracaibo, Venezuela and, similarly, your work encompasses both teaching and professional location sound services for TV and film, travel becomes a way of life. Such is the case for Xanti Salvador, a location sound recordist who is also a college level instructor of audio. Moving from city to city and project to project requires Salvador to travel efficiently and, so, it’s only fitting that his wireless microphone technology be equally as adept to ever-changing environments. That’s why Salvador relies on wireless technology from Rio Rancho, NM-based Lectrosonics.

“My professional life is divided between Europe and South America,” Salvador reports. “In addition to my faculty position at the Facultad Experimental de Artes FEDA-LUZ in Maracaibo, where I teach sound editing and other aspects of audio, I am also active as a location sound recordist for TV and film.” Salvador’s credits include work on the short format La Casa del Lago, the made for television film La Cospiración, a documentary titled Cuidadores, and the film El Cazador De Dragones.

Currently, Salvador is working location sound for a project titled Konuko, which is currently shooting in Venezuela, Spain, Colombia, and Cuba. The program, to be aired on Venezuelan television in 2013, is a documentary about Permaculture, a theory of ecological design which seeks to develop sustainable human settlements and agricultural systems by attempting to model them on natural ecosystems. For this project, Salvador reports using a 2-channel setup consisting of his HM plug-on transmitter, two SMDa super miniature transmitters, and his SRa two-channel slot-mount Digital Hybrid Wireless® diversity receiver—a system comprised of the smallest and lightest pieces of his Lectrosonics equipment.

While he’s not currently using his UCR411a receivers, Salvador made note of his fondness for the frequency tracking filters of that model. “I find the frequency tracking filters do a remarkable job in crowded RF environments that enable me to use more channels, obtain excellent range and minimize RF interference,” he explained. “Again, it all boils down to great sound and excellent coverage.”

To learn more about Xanti Salvador, visit him online at www.xantisalvador.com.