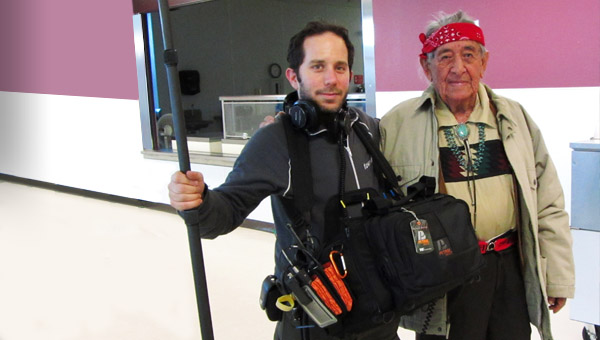 Albuquerque, NM – February 2012…Unwasted Weekend, a recent program developed by Above The Influence, is a teen-focused anti-drug campaign created by the Office of National Drug Control Policy (ONDCP). The effort, supported by MTV through a series of style vignettes, included a shoot that recently took place in New Mexico.As with any location sound project, there is precious little time for re-takes, so ‘getting it right the first time’ is a crucial component of working in this business. That’s precisely why Matthew Israel, the location sound mixer on the project, uses wireless microphone technology from Rio Rancho, NM-based Lectrosonics.

Israel—a sound mixer since 1996—works extensively in documentaries, commercials, and other short form projects. His most recognized credits include Once in a Lifetime (a documentary about New York’s Cosmos soccer team in the 70’s) and Thrilla in Manila (a look at the Muhammad Ali - Joe Frazier fight trilogy). He discussed the Unwasted Weekend project and his preference for Lectrosonics.

“Unwasted Weekend is aimed at promoting a drug and alcohol-free lifestyle,” Israel explained. “The project took place over four weekends during late December and early January. The project profiles four adolescents and their activities that promote a positive, substance-free lifestyle. The Albuquerque, New Mexico portion documents a young woman who lives on a Pueblo Reservation and her efforts to keep younger kids aware of their culture, their history, and to keep its traditions alive.”

“For this project,” Israel continued, “I used three Lectrosonics UCR411a compact receivers as well as an SRa dual channel ENG receiver with the SR cameral mount sleeve, which works really well with the Sony F3 video camera. My transmitters included one SM super-miniature beltpack transmitter, an SMQV dual battery unit, and a UM400.”

When queried about those aspects of his equipment that makes Lectrosonics such a good fit for this type of work, Israel offered the following. “For starters, the sound quality is terrific,” he said. “Lectrosonics’ Digital Hybrid Wireless® technology is really good. I haven’t heard another wireless system that has convinced me to even consider going elsewhere. Equally important, the build quality and reliability are first rate. The equipment has a really sturdy feel and the ease of its menus and interfaces makes operation quick and effortless.”

Israel also spoke favorably of how his SRa receiver helped him on the Unwasted Weekend project, “I love the SRa’s ratio feature. On this job, I was sending a mono mixdown track to the right audio track of the camera and let the camera mic fly on the left track. That way, if there was B roll or the camera op /dp went off to shoot something on his own, he still had some ambient/reference sound to work with. I’m also fond of the available right angle TA3 to 3-pin male XLR output connectors for the SRa. They’re really well made and, since they don’t protrude, they don’t get in the cameraman’s way.”

Quality customer and technical support services are crucial to location sound professionals and, in this regard, Israel rates Lectrosonics best in class. “Lectrosonics support services are the most helpful and knowledgeable I’ve encountered,” he reports. “I frequently call them with questions and they are very responsive.  I called recently and someone answered the phone before they were even open for business.  Since I was in the area, I stopped by for a tour during my job in Albuquerque and they offered to check my receiver on the spot. I can’t say enough about this aspect of their business.”

Reflecting on his time in New Mexico while working on the Unwasted Weekend project, Israel offered this final thought, “From an audio perspective, everything on this project turned out great. The client was happy with the audio I delivered and, since the gear performed so well, it helps ensure that I leave a good impression— and that gets me hired again. Lectrosonics understands what products and services their customers need to succeed. They get it.”