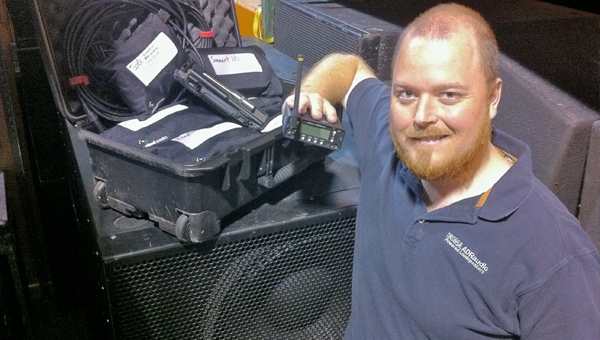 SCOTT AIR FORCE BASE, NJ – November 2011… For this year’s annual 4thof July celebration, the Joint Base McGuire-Dix-Lakehurst facility— an amalgamation of the former United States Air Force McGuire Air Force Base, the United States Army Fort Dix, and the United States Navy Naval Air Engineering Station Lakehurst—celebrated in grand style with music, fireworks, and all the trimmings. The task of delivering clear, intelligible audio across a massive field in the center of this sprawling base proved to be quite a challenge in past years. This year, however, base management gave a big ‘thumbs up’ for the sound quality, and it couldn’t have been achieved without wireless technology from Rio Rancho, NM-based Lectrosonics.

New Britain, CT-based independent Audio Engineer Bennett Prescott, working in conjunction with Farmingdale, NJ-based Asbury Audio, was brought in to help create a sound reinforcement setup capable of delivering the audio quality that had been sorely lacking during past celebrations.  Using a Lectrosonics TM400 Wireless Test and Measurement System utilizing the company’s storied Digital Hybrid Wireless® technology to help calibrate the sound system and a D4 Digital Wireless System to eliminate cable runs between the mains and the delay system, Prescott achieved the clear, consistent sound coverage that had eluded other sound companies.

“We were tasked with providing sound across an enormous field,” explained Prescott. “The area measured roughly 500 feet wide by 1,500 feet in length. Up front, there was a mobile stage set up for live bands during the day and canned music that played during the fireworks show in the evening. The main loudspeakers consisted of ADRaudio L2821 line array systems—flown 12 elements per side and hung at approximately 40 feet with twelve ADRaudio JD21 subwoofers. The delay tower, which was positioned just over 400 feet out from the stage area, consisted of ten EAW KF760 line array enclosures coupled with four KF730 compact line array modules suspended underneath and four ADRaudio ATA618C cardioid subwoofers for low frequency support. This single cluster was flown roughly 45 feet in the air.”

“I had no idea in advance where I would be able to place my delay hang or what my cable path would look like,” Prescott continued. “Because of these unknown variables, I wanted to simplify matters by using the Lectrosonics D4. This way, I could just drop a generator, place some amp racks, position my delay tower, and receive the PA signal wirelessly. With just under 400 feet from the mains to the delay hang, the D4 system performed flawlessly—and this distance speaks volumes about the D4’s range capability. I think it’s also important to note that the system accomplished this with the stock antenna.”

In addition to the D4’s range, Prescott was equally impressed with the system’s sound quality and its easy operation. “The D4 was incredibly easy to set up and operate and the sound quality was indistinguishable from wire,” he said. “I had to pad down the inputs on the transmitter a bit so as not to create any clipping with maximum signal from the mixing console and, after that, I was pretty much set up and ready to go. I did a frequency scan ahead of time to check for any conflicts in the 900 MHz range, but there were none, so this was effectively a set it up and plug it in affair. I had almost full signal strength right from the start—even with an obstructed line of sight to the transmitter.”

This year’s 4th of July celebration was hugely successful, as Prescott elaborated, “The D4 worked extremely well and the client has already committed with us for next year. Our client was very happy and said that no sound company previously hired for this job had been able to adequately fill the field with suitable sound coverage at an acceptable level. We had solid speech intelligibility all the way to the 1,500 foot mark.”

“A big part of our success on this project was being able to position the delay hang where it needed to be and not have to worry about the cable / transmission path,” Prescott said. “The D4’s ability to handle 4 channels of audio wirelessly with no loss over that great a distance made my life much easier. My array and subwoofer processing and delays were handled at the transmitter location and then fed wirelessly to the receiver and the loudspeakers so I didn’t have to worry about networking the remote location. With the TM400’s ability to wirelessly take the measurements I needed and the D4’s ability to feed the delay hang without a single wire, the setup was clean, much easier to get operational, and the sound quality was terrific. The Lectrosonics equipment really came through for us.”