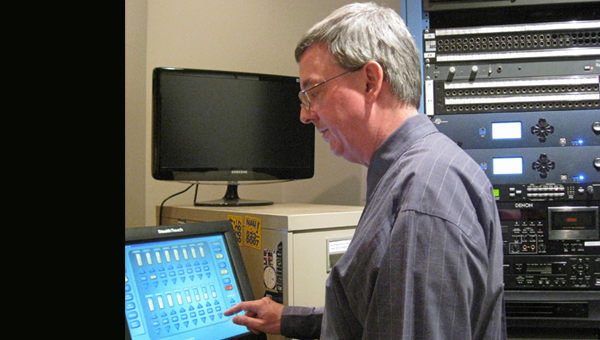 Flagstaff, AZ – November 2011… With 39 satellite campuses throughout the state, Northern Arizona University (NAU) is a highly respected research university offering both undergraduate and graduate degree programs to approximately 25,000 students—17,000 of which are enrolled at the Flagstaff campus. At the Cline Library on the main campus, the University recently upgraded its Assembly Hall—a multipurpose space for lectures, presentations, meetings, movies, and more—with a new digital video and audio system. Encompassing a wide assortment of input sources that includes computers, document camera, VCR’s, DVD and Blu-ray surround sound playback plus microphones, the various audio feeds constitute a complex audio setup—one that is very competently managed by an ASPEN processing system from Lectrosonics.

“The Energize control system accommodates source selection and live mixing via a touch panel control surface,” Ginger continued. “There are two touch panels— a 12-inch panel in the control room and a 10-inch panel at the podium. From either location, operators have full control of everything in the room, including projector, the DVD and Blu-ray players, audio sources, etc. As the system is operated by both University staff and student workers, we implemented a combination of full operational and simplified operation of input/output audio mixing and muting. Some functions such as equalization are not accessible from Energize to minimize the possibility of something being inadvertently changed.”

Ginger reports that the combination of the Lectrosonics ASPEN processor and the Energize control system work beautifully together. “The ASPEN processor and our Energize control system make a great combination,” states Ginger. “There is so much functionality in the ASPEN. I love the fact that you don’t need to create all the DSP routing, mixing, and EQ blocks to build a system. With its ability to be configured in so many ways, the ASPEN processor is a lot more straight forward than many competing systems I’ve encountered. We also have the entire setup programmed so that, in the event of a power failure for example, the Energize system restores system settings to the last known state—making the entire setup easy to manage and maintain.”

Ginger offered this parting thought, “The combination of ASPEN processor and the Energize control system offers tremendous possibilities,” said Ginger. “Our client has been extremely pleased with the new system and all reports indicate the equipment is working flawlessly. The student staff is operating a very sophisticated AV system with a very clean, intuitive control interface and everything has gone very smoothly. Currently, we’re working on several additional Lectrosonics/Energize designs for other clients. When a job such as this leads to new business, that’s as good as it gets.”

To learn more about Intent Digital, visit the company online at www.intentdigital.com.