Roland Guerin Finds Much To Like With Lectrosonics Wireless 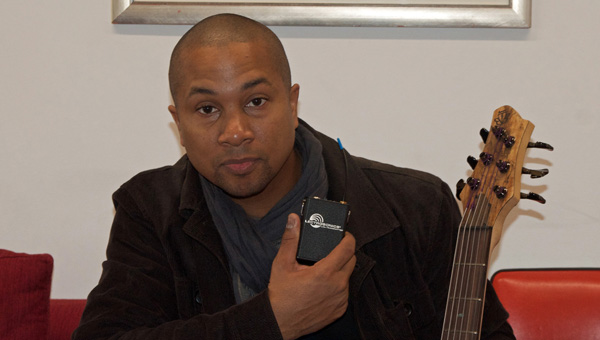 New Orleans, LA – October 2011… For guitarists and bassists, nothing short circuits a performance quite like getting one's instrument cable snagged on something or, worse yet, yanked from the instrument. Such occurrences inhibit one's ability to focus on the most important aspect of all—the musical performance. After wrestling with these frustrations long enough, Roland Guerin, bassist for musician, composer, and record producer Allen Toussaint, determined there had to be a better way. He found the sound quality and freedom of movement he sought with the Lectrosonics' IS400 Wireless Beltpack Instrument System, which consists of the R400A receiver, an LMa Digital Hybrid UHF beltpack transmitter, plus the MI39A instrument cable that connects the instrument's output to the transmitter.

New Orleans-based Guerin has an enviable track record in terms of his musical accomplishments. With six CDs released under his name (including the just released A Different World), and a list of credits that includes performance stints with pianist Marcus Roberts, guitarist / composer John Scofield, and conductor Seiji Ozawa in addition to his work with Toussaint, Guerin knows what it takes to deliver on stage. He shared his experiences that, ultimately, led to his acquisition of the Lectrosonics IS400 wireless system.

"Sound quality always comes first and this unit delivers in a big way," Guerin said. "With this system, I get a real, big full sound with both my upright and electric basses. Not only is the sound on par with a cabled connection, to me, it feels stronger. The system's range is exceptional. Now, I'm free to move about as required by the performance—without having to mentally keep track of where the cable is. Equally important, since I no longer have a long cable attached to my instrument, I don't have to concern myself with the cable slapping my upright bass and dealing with the resulting cable noise. This is a monumental improvement for my performance."

"I've also been really impressed with the build quality of this system," he continued. "This gear feels solid and it travels really well. Sometimes, I travel by vehicle, other times I fly. Either way, my equipment is constantly packed and unpacked and is constantly on the move. The IS400 system has proven itself to be really robust and this aspect further inspires my confidence when I step out on stage."

While sound quality and reliability are certainly important considerations, freedom of movement was yet another vitally important factor that led to Guerin's acquisition of the Lectrosonics IS400 Wireless Beltpack Instrument System. "I once had the unfortunate experience of stepping on my cable and pulling it out of my instrument jack during a performance," he reports. "If you step on a cord or it gets caught on something while you're performing, it not only takes you out of the instrument mix and makes noise as you re-connect; it's incredibly distracting to the performance. After that experience, I found myself subconsciously focusing on the cable more than I should during performances, and I don't want that sort of on-stage distraction. The IS400 Wireless Beltpack Instrument System completely resolves that issue."

Guerin recalled his initial experience with his Lectrosonics wireless system. "Like many musical electronics," Guerin explained, "I had questions when I first took delivery of the system. The Lectrosonics field rep in my area went out of his way to explain the equipment to me and to get me up and running. With just a bit of experimentation, I found I was comfortable with the system in no time at all and, since then, I haven't had to make any more support calls. The company has been a pleasure to deal with. They've been very helpful in every aspect."

As he shifted his focus to the business of preparing for a tour through Australia with Allen Toussaint, Guerin offered the following, "My experience with the Lectrosonics gear takes me way beyond being a happy customer. Every aspect of the system is working terrifically for me. With my IS400 setup, I'm happy with the sound, I no longer feel restricted in my movement, and this makes a huge contribution to the overall level of my performance."

To learn more about Roland Guerin, visit him online at www.rolandguerin.com.