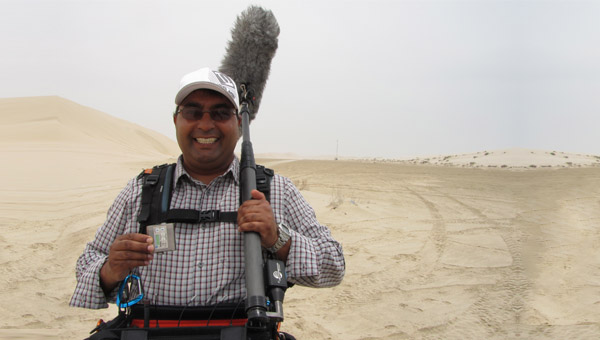 Doha, Qatar – September 2011… Bordering only Saudi Arabia to the south, Qatar is a peninsula country surrounded by the waters of the Persian Gulf. While one might expect a cool, tropical breeze, the reality is quite the contrary. This is harsh desert terrain where the heat can reach as much as 120 degrees Fahrenheit and take a steep toll on all who venture outside unprepared. But as the saying, "the show must go on" implies, TV and film work doesn't wait for 'better days.' Such is the business of Birmingham, UK –based location sound mixer Baldev Rayat and his arsenal of Lectrosonics wireless equipment.

Known throughout the British pro audio community simply as Bal, Rayat's credits include location sound work for the BBC's Countryfile, a look at the people, places, and stories making news in the British countryside, as well as Gears and Tears, which is a look at the world of stock car racing. He has also worked with legends such as Robert Plant and Tom Waits. Bal recently found himself battling the desert heat in Qatar while on location for the production of two Qatari television shows: Desert Heroes and Serious Hobbies. Equipped with four Lectrosonics UCR411a compact receivers, five SRa slot mount diversity receivers, five SMQ super miniature beltpack transmitters, two SMQV super miniature beltpack transmitters, a UH400A plug-on transmitter, and an RM remote, Bal's equipment was seriously put to the test on these projects.

"I was working these shows during May and June," Bal says. "While there were several cameramen on these projects, I was the only sound guy, which only made matters more challenging. The heat in Qatar proved to be very difficult for both the crew and the equipment. Temperatures were hitting anywhere from 113 degrees to 120 degrees Fahrenheit. Considering the desert sand gets into everything, I was really impressed with the fact that my Lectrosonics equipment kept operating without any issues. At the end of each day, I simply gave the gear a quick vacuum and that kept everything in check."

Bal was equally impressed with the range he experienced out in the desert. "For Serious Hobbies, I had to shoot a guy paragliding," Bal explained. "He was flying above our heads at a height of about 328 feet… maybe more. I had no problem hearing every word he said. There are no reflections in the desert, so the RF range was really important. The SMQ transmitters gave me range I believe no other radio mic could possibly achieve and the sound quality was fantastic. Because I was the only person who could hear the paraglider, I ended up relaying everything to the director!"

In addition to the ability of his Lectrosonics equipment to deliver consistently under extreme weather conditions, Bal was equally impressed with the flexibility provided by his RM remote, an accessory that facilitates adjustment of audio input gain, RF operating frequency, front panel lock / unlock, and sleep mode on / off. "Qatari men—like most Arab men—wear thobes," Bal notes.

"This is an ankle-length garment, usually with long sleeves, akin to a robe. It's a traditional garment and is considered formal attire. For cultural reasons, it can be very tricky miking a person wearing a thobe. Once miked, you cannot change things, as the men do not like the fuss involved. As a result, if I needed to change the gain or frequencies on the transmitters, I simply used the RM remote. It was a tremendous help on these two projects."

Reflecting on some of the toughest location sound projects he's ever encountered, Bal offered these closing thoughts. "My Lectrosonics gear delivers terrific sound quality, great range, and every last piece is built like a tank, which provides tremendous confidence in the equipment," he said. "The company's support is first rate and when it all gets factored together, it boils down to one conclusion: I can't imagine doing this type of work without my Lectrosonics gear."

For additional information about Bal and his audio services, contact him at This email address is being protected from spambots. You need JavaScript enabled to view it..

About the equipment identified in this press release…