Wireless Provides Violinist David Felberg The Freedom To Be Creative 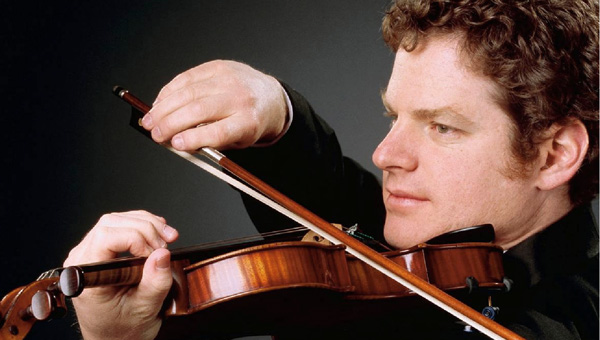 Albuquerque, NM – August 2011… When it comes to symphonic and chamber music literature, violinists usually don't perform with a microphone. As such, the inclusion of this venerable instrument into contemporary literature presents challenges many violinists routinely don't encounter. Common issues include the ability to match levels with other electronic instruments—without the distraction of having to remain in close proximity to a microphone or, worse yet, be encumbered by a microphone cable while performing. For violinist David Felberg, these and other technological matters were recently resolved by incorporating wireless technology from Lectrosonics.

As Concertmaster of the Santa Fe Symphony Orchestra, David Felberg is a well-known persona throughout New Mexico's music community. In addition to his responsibilities with this organization, his talents are also integral to Ensemble Music New Mexico, the non-profit parent corporation of Chatter, a chamber ensemble, and Church of Beethoven, a weekly series of ensemble music and poetry. It is primarily through these two musical endeavors that Felberg was searching for a solution that would enable his violin to assume a presence on par with other electronic instruments and the sound systems they play through. Ultimately, his search led to a Lectrosonics UM400 transmitter, an R400A receiver, and a customized MI33A instrument cable. He discussed the issues that resulted in his Lectrosonics purchase.

"I've played acoustically for much of my performing life and only recently became involved with contemporary classical music that requires amplification and live sound processing," Felberg reports. "Hence, I was looking for wireless microphone technology that delivered the sound quality, ease of use, and freedom of mobility I was used to when performing traditional literature. I'm not accustomed to being tethered at all, so the thought of having a microphone cable hanging off me wasn't the least bit appealing, as it would be distracting. I already work with a number of effects pedals, so the prospect of having to deal with a mic cable was a big concern. Since I usually perform using sheet music—as opposed to music that is improvisational in nature—the wireless system frees me up to perform as I'm accustomed to. By not having the distraction of a being attached to a cable, the wireless system gives me greater confidence during performances." 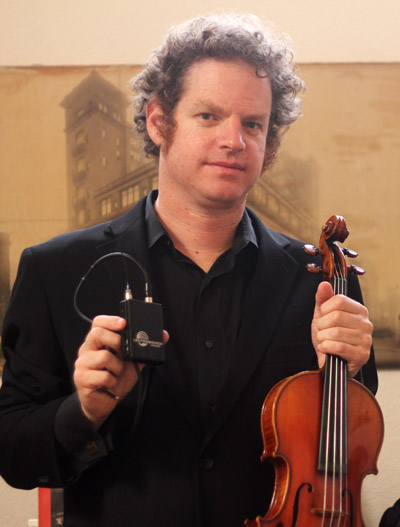 Felberg acquired his Lectrosonics wireless system in May and began using it shortly afterwards. He quickly became very fond of the equipment. The systems' sound quality is excellent," he says, "and I really haven't observed any changes in my approach to performing. The sound quality is every bit on par with cabled microphones and the ease of operation is terrific. I clip the transmitter to my belt when I perform. It's so light and small; I don't even feel it when I'm performing. I also find the R400a's one touch SmartTune™ feature very easy to use and, as such, I've never encountered difficulty finding available frequencies. Simply put, I never have to think about the equipment—and that's exactly as it should be."

Paired with his DPA IMK4061 Miniature Condenser microphone kit, Felberg's transition to wireless technology has been a seamless experience. "With this equipment," he said, "I feel as though I'm playing my violin normally—as though I'm not attached to anything. Learning to use the equipment was also a very positive experience. Thanks to Karl Winkler at Lectrosonics—who also plays viola and violin—I couldn't possibly have received better or more knowledgeable tech support. Karl understood the challenges, directed me to a perfect solution, and ensured that I understood its operation."

As he prepared for another day of music and rehearsals, Felberg summarized his Lectrosonics experience, "The feeling of being untethered has enabled me to perform without distraction or compromise. I particularly love the fact that the equipment enables me to hear my sound from the audience perspective. This capability is tremendously important, as it enables me to monitor my sound to ensure that it comes across as I envision. At the end of the day, it all boils down to this: my Lectrosonics setup enables me to focus on the music without the distraction of having technology compromise the creative process."