Lectrosonics Wireless Hangs Ten During The US Open Surf Competition

Water-resistant transmitters provide up close and personal action during championships 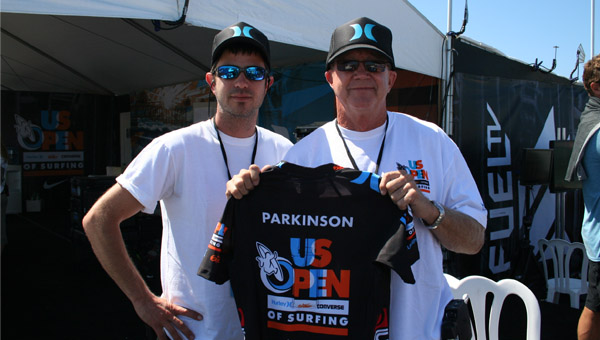 Huntington Beach, CA – August  2011… While the top four American sports have the audio advantage of being on land, the NBA's Wired for Sound or Inside the Huddle with the NFL, to name a few, the world of surfing has a much bigger obstacle to overcome – water. Technology and the elements seem to be always battling one another in the field and up until recently, H2O has been the rain on audio's parade. For A1 mixer / sound designer, Gary Vahling, putting the plug on this obstacle and other technical issues were resolved by using Lectrosonics' wireless technology.

The US Open of Surfing was a nine day live event that ran from July 30th to August 7th and was one of the world's largest competitions on the ASP (Association of Surfing Professionals) tour for both men and women. The men's side featured a North America ASP Men's Prime event with valuable points on the line right before the coveted ASP Top 32 cut-off. For the women, fans witnessed the final event of the 2011 ASP World Title Tour and the crowning of the women's world champion. This year's event was unique because it featured an "All Star" segment where online viewers were able hear all the action of the championship rounds as if they were right next to the surfer. Gary Vahling of the Coffey Sound rental department looked to the Lectrosonics MM400c water-resistant wireless transmitter to capture this flurry of surfing activity.

"I knew we needed something light-weight, reliable and most of all, water resistant. The Lectrosonics MM400c is absolutely perfect for a job like this one," mentions Vahling. "I was looking for a transmitter that could deliver great sound quality, but wasn't cumbersome to the surfers. These athletes are not as used to being wired for sound like the actors in Hollywood, so it was really important to find a solution that wouldn't hinder them in any way during the competition. The Lectrosonics MM400c transmitter is small enough not to add any of those further distractions."

Working together with Tim Denmark of H2audiO, Denmark came up with the idea to wire the surfers with the MM400c for competition. Paired with a Countryman B6 that was strung along the inside of the collar, the unit became the perfect combination for the day's event. Denmark and A2 Mike Gatzios were in charge of field operations during the surfing competition and relayed their audio cues and notes to Gary in the production truck a few hundred yards away. "It's incredible to help build a   new audio platform in sports," says Denmark. "We were pioneering innovative techniques to bring the viewer closer than ever before. One of the surfers mentioned to me their mother called them up after a heat and was so excited that they could actually hear them while they were on the board. The stuff we can do now is just amazing." The MM400c's were used in combination with Venue receivers to help transmit the "gnarly" sounds of  the surfers from 150 yards away. "We gave T4 IFB transmitters and R1A's to our sideline reporters which coupled with ALP-620 antennas which worked out great," adds Gatzios.

With Vahling's work at the US Open of Surfing, sound quality and performance were crucial during his live webcast to everyone across the globe. "You don't have second chances with a live broadcast, and Lectrosonics gave me the confidence that there wouldn't be any hiccups during production," adds Vahling. "Frequency coordination is a must with events like this. With all the broadcast equipment and smaller ENG shooters running around we made sure to police everything so RF problems could be eliminated. Using the recommended IAS program (Intermodulation RF Analysis Software) from the Lectrosonics website is a very valuable tool in a sound designer's arsenal."

As the competition slowly wound down, Vahling noted that when he has to do this all over again in a few months, Lectrosonics and, especially, the MM400c will be something he has in his kit without question.

Providing the film and television industry with professional audio gear and services for over 20 years, Coffey Sound prides themselves on having a huge inventory of sound equipment for purchase or rent. From the newest digital wireless systems and multi-track recorders to industry standard boom mic kits, we have what you want and are experts on how it works.