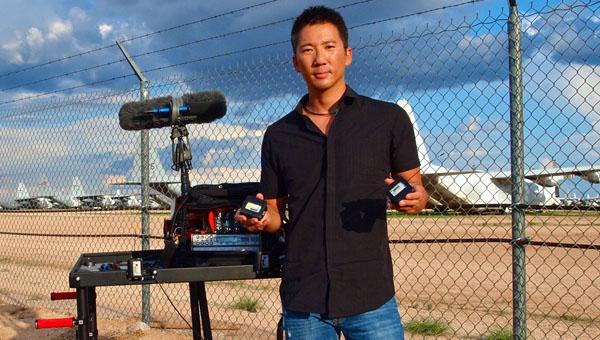 Phoenix, AZ – July 2011… What might happen to our surroundings if people were to suddenly vanish from the face of the Earth? That's the premise of Life After People, a new series on the History Channel. As each day, month, and year passes, the fate of a particular environment is examined. It's hypothetical, of course, but the use of special effects, combined with interviews from top experts in the fields of engineering, botany, biology, geology, and archeology provides an unforgettable visual experience. For one particular episode, much of the information gathered for the program was accomplished through interviews—many of which took place on a military base. With a plethora of radio frequencies in the environment, capturing the audio with wireless microphones turned out to be a real learning experience, but it all came together—thanks to wireless technology from Rio Rancho, NM-based Lectrosonics.

Ty Chu is a Phoenix-based location sound recording engineer involved with the Life After People project. A well established audio professional with a solid track record in the areas of documentaries and independent features, Chu's credits include Monsters Inside Me on Animal Planet and The Universe's Biggest Blasts on the History Channel. While he's encountered plenty of difficult scenarios during his 6+ years in the business, the challenges of working among a congested military RF environment was a true eye opener. Fortunately, his entire arsenal of SMDa Super-Miniature, SMa Super-Miniature, and HM plug-on transmitters all employ Lectrosonics' highly acclaimed Digital Hybrid Wireless® technology, as do his UCR411a compact receivers.

"Between the air traffic, radar towers, and a multitude of other communication signals, the RF environment was positively stifling," Chu reports. "This was, without question, the most difficult RF area I have ever encountered. But I have to tell you, Lectrosonics pulled through for me and provided no dropouts—even though my whole band was taken up by military RF. The spectrum analyzer in my four UCR411a's helped out tremendously."

Chu uses four SMDa transmitters, two SMa transmitters, and most recently, acquired Lectrosonics' new HM plug-on transmitter for use with his UCR411a receivers. He discussed the attributes of his equipment that impress him the most. "First and foremost, the sound quality of the Lectrosonics equipment is what makes all the difference," says Chu. "The company's Digital Hybrid Wireless technology yields much higher dynamic range—without the sonic artifacts— than wireless systems using a compandor are able to offer. For all intents and purposes, the audio quality is on par with a wired microphone."

"Secondly," he continued, "the build quality and the product's overall engineering are exceptional. I've used this equipment in the desert where the heat reached 115 degrees Fahrenheit and I've had the same gear out in the snow and the rain. Nothing seems to bother it. The LCD displays and the membrane switches on my transmitters, for example, are easy to read and sealed so that dirt and moisture really can't damage the electronics. Further, the housings are all custom machined out of metal and, in the case of my SMDa's and SMa's, their compact size makes them easy to conceal them on the talent. In the heat of the moment, no other transmitters allow for a quick change of frequencies on the fly with such an easy-to-use menu system. Its details like these that inspire confidence."

In Chu's line of work, responsive customer and technical support services are critical. Here too, he had nothing but praise. "On those rare occasions when I needed assistance," he said, "I was able to pick up the phone and get a technician who understood my issue. The company's support staff understands the applications for their products, so you get useful answers as opposed to someone who's simply reading a canned response. Lectrosonics' support is nothing short of outstanding when it's needed, which is very rare."

As he prepared for another day out in the field, Chu offered this parting thought, "In my line of work, nothing compares to Lectrosonics. The sound quality is excellent and the gear is built to endure the rigors of this type of work. I really can't imagine using anything else."