Lectrosonics At The Center Of Little Shop Of Horrors 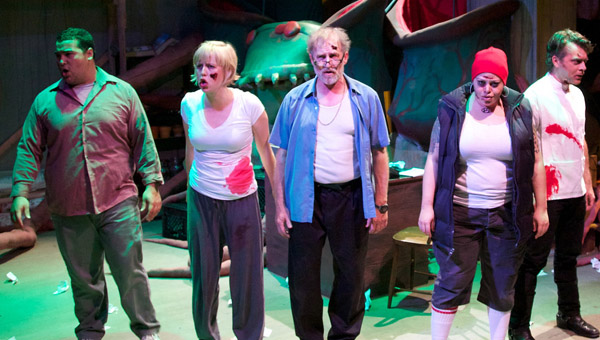 San Francisco, CA – June 2011… Running sound for the Boxcar Theatre's musical show Little Shop of Horrors isn't like your typical musical Broadway production sound setup where all the action takes place on the stage. The show starts in the lobby of the theatre—where it's transformed into Mushnick's floral shop—and proceeds into the streets for 'Skid Row.' After Skid Row, the audience and cast are brought into the theatre.  Organizing the multiple microphones to make all this take place is a major event in and of itself, and it wouldn't have happened without the wireless technology of Lectrosonics.

Sound designer and mix engineer Alan Chang discussed the challenges of capturing all the various sound sources and delivering a clear mix with consistent levels as the show moves among its various locations. "The most challenging aspect of this production," explains Chang, "is miking the entire 13-person cast plus the band to ensure proper sound reinforcement in the 49-seat theatre, the lobby, and the streets during the show. Not only are there three key zones to mix, there are also three additional speakers on stage for live audio feeds and pre-recorded cues in addition to a band and booth mix. All of this operates alongside the left and right mains of the theatre, which equates to eight different mixes."

To make it all happen, Chang and others on the production staff decided to use all hidden and concealed lavaliere microphones due to certain obstacles and circumstances that made the use of headmics less than desirable. To ensure freedom of movement, superior sound quality, and the frequency agility necessary to ensure optimum performance in RF-rich downtown San Francisco, the crew employed Lectrosonics Digital Hybrid Wireless® technology in the form of LMa transmitters with a Venue mainframe receiver system stocked with the company's VRS receiver modules. This equipment was deployed for the trios and ensembles, as Chang elaborated, "This combination enables us to keep things as light and as slim as possible while keeping performance, sound quality, compatibility, and reliability on top of the list."

"For the main cast members, we use a mix of Lectrosonics UCR211 and UCR411a receivers with matching UM400a transmitters," he says. "Considering the show has multiple understudies, this means multiple actors are playing multiple roles, which makes it ever so interesting in order to keep the mics and transmitters as consistent and compatible as possible. Fortunately, Lectrosonics enabled us to keep things where they were without having to adapt to a different workflow."

"Mixing this show from behind closed walls is one of the toughest obstacles," says Chang, "since the only cues are from the actor's microphones. Similarly, ensuring consistent levels from one scene change to the next keeps matters really interesting. One such example is mixing for Skid Row and the Dentist. This all happens outside on the street while the operator is sitting in the sound booth trying to provide the best mix for the audience, which are located both outside and in the lobby. Not only does the mix need to sound balanced, cues also need to be executed on the exact spot."

In addition to the challenging logistics already discussed, this complex and unique production also incorporates pre-recorded videos with TV anchors as well as live camera feeds of the lobby, alley, and stage to help those seated inside the theatre see the total production. With sound sources seemingly everywhere, range was yet an additional consideration for the wireless microphones.

"The range of the Lectrosonics gear has been exceptionally good and consistent," Chang says, "even with the performance on the street. I've experienced solid RF levels from 500 feet away—even when my receivers are in the theatre, which is separated by the lobby! Finally, when it's time to sing the Finale, everyone in the audience is amazed that the entire cast comes through the main speakers. This is something you don't expect everyday in the theatrical world, less likely in a 49-seat theatre house. The Lectrosonics wireless equipment has really helped pull this show together. It's been a great experience."

For additional information about the Little Shop of Horrors and the Boxcar Theatre, visit http://boxcartheatre.org.