Burlington, VT – June 2011… Essex Alliance Church, headquartered in Essex, VT, is one of the largest non-denominational churches in the state of Vermont. Each week, the church typically conducts four services so as to accommodate its congregation of roughly 4,000 worshippers. As a means of assembling the entire congregation for their special Easter service this year, the church rented the Patrick gymnasium at the University of Vermont in Burlington. In an effort to ensure the best possible sound quality throughout the venue, a variety of special sound reinforcement provisions were placed into service. For several of the performers, this included new Quadra IEM systems from Lectrosonics.

“Essex Alliance Church has a contemporary worship style that incorporates a lot of music,” Wainer explained. “In addition to a roughly 75-voice choir, there was a 16-piece band as well as an 8-piece praise team of vocal soloists. The job called for eight discreet monitor mixes that were to be used by a combination of twelve musicians and vocalists. Because the Quadra can accept two stereo or four mono signals, the system is extremely flexible in its ability to facilitate a variety of mixes for each performer. By using two Quadra M4 4-channel transmitters, we were able to assemble an 8-channel system in a single rackspace, which is nothing short of extraordinary. By contrast, if we were to use systems from competing manufacturers, this would have would have required antenna combiners and other components that would have resulted in a considerable amount of additional rackspace.”

“The M4 receiver—the beltpack component that is actually worn by the performer—includes a configurable 4-channel mixer with independent level knobs that enable each performer to mix four discreet audio signals according to one’s preference,” he continued. “This capability makes the system really flexible. Each performer was able to blend various aspects of the signals they received in order to custom create a mix that was right for them. The system offers tremendous customization.”

With its 24-bit digital audio format, the Quadra’s sound quality was exactly what Wainer and his associates were hoping for, but that wasn’t all that impressed him. “With the flat frequency response of the Quadra, I believe it’s the best IEM system available,” he reports. “I was equally impressed with the build quality of the equipment. The receivers are surprisingly compact, they feature an excellent, informative display that’s easy to read and they have a really solid feel.  The metal casings are beautifully machined. The entire system conveys a level of confidence that you simply don’t get when you pick up a plastic unit from a competitor.” 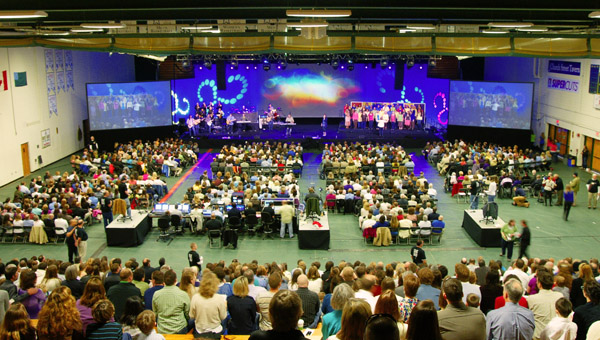 Reflecting on his experience with Lectrosonics’ Quadra IEM system at Essex Alliance Church, Wainer offered the following comments. “The Quadra system’s performance was exceptional,” he said. “The sound quality is first rate, the gear is intuitive, and Lectrosonics was very supportive. Howard Kauffman, our regional sales rep, made certain everything was working up to our expectations. The system’s battery life is very good and the entire system worked exactly as we had hoped for. Most importantly, the performers were very complimentary of the equipment’s sound quality and its ease of use. We couldn’t have been happier.”

To learn more about Essex Alliance Church, visit them online at www.essexalliance.org. For additional information about Dark Star Lighting & Production, go to www.darkstarlighting.com.