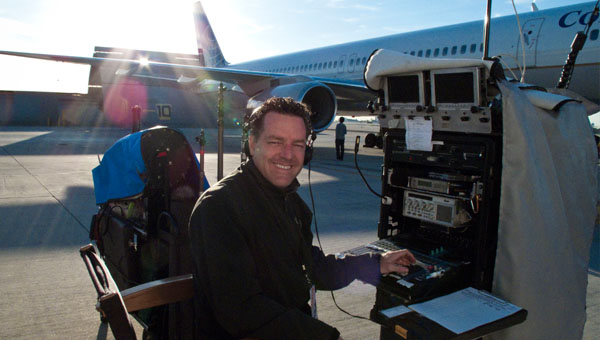 Los Angeles, CA – May 2011… When you’re running location sound for Modern Family—one of TV’s hottest sitcoms—the ability to capture audio efficiently and without interfering with the show’s creative process is absolutely essential. Modern Family captured six Emmy® Awards after its first season— including Best Comedy, Best Writing, Best Supporting Actor, Best Editing for a comedy or drama (half hour), Best Sound Mixing for a comedy or drama (half hour), as well as one for Casting Director Jeff Greenberg. For the show’s production sound mixer, Stephen A. Tibbo, CAS, the Emmy for Best Sound Mixing holds particular significance, as it was his first such award. With additional credits that include NBC’s Life and CBS’ Ghost Whisperer, as well as the films Kiss, Kiss, Bang, Bang and American Pie 2, Tibbo obviously knows a thing or two about location sound. That’s why his wireless equipment of choice is Lectrosonics.

Tibbo has a rather large Lectrosonics arsenal, most of which employs the company’s highly acclaimed Digital Hybrid Wireless® technology. Transmitters include five SM’s, four SMQ’s, four MM400’s, an HM plug-on, three UM400’s, and some older UH190’s. He also uses a UT handheld transmitter on occasion when one of the actors needs a handheld mic.  His receiver setup encompasses two rack mount Venue systems plus a VR Field portable system. All receiver mainframes are fully stocked with Lectrosonics VRT receiver modules for a total of 18 channels. Further, Tibbo keeps several additional VRT’s on hand as backup.

“We have a huge cast and there’s a lot of adlibs, and most scenes are captured in one setup, Tibbo explained. “This is somewhat of a multi-camera hybrid shoot, without an audience, as opposed to a single camera comedy setup. There are constantly line changes and adlibs. Because of this arrangement, we wire everyone all the time, with the guys on wireless boom. The Lectrosonics equipment sounds great and performs beautifully for us. With all the adlibs, if one of the boom operators misses a line, I can count on it being picked up on one of the iso-tracks that I record.”

“I also use a Lectrosonics IFB (interruptible foldback) setup,” he added. “I use an IFBT1 transmitter and a number of R1 IFB beltpack receivers. This equipment serves as a private line to my team, which includes boom operators Preston Conner and Dan Lipe.”

With such a large number of wireless channels on the set—not to mention all the other wireless activity in the immediate vicinity—the recording of Modern Family takes place in a congested RF (radio frequency) environment. Hence, the ability to quickly and easily identify open frequencies is of paramount importance should one of the existing frequencies suddenly get ‘stepped’ on.

“The Lectrosonics Venue is a great system,” Tibbo says. “Not only am I able to easily scan for open frequencies if I get an interference hit, I can just as easily, and quickly, change the frequency. This, combined with the fact that I have 18 wireless channels in such a compact form factor, is a huge benefit. I’ve set up my Field Venue with the same VRT blocks as my primary cart Venue so I can pick up my mobile kit and begin recording quickly,” states Tibbo.

When queried about the performance attributes of his Lectrosonics equipment, Tibbo offered the following thought, “I use this equipment almost every single day. The actors and actresses wear the transmitters all the time, and the product durability and reliability are exceptional.”

Before re-directing his attention back to the business of the day, Tibbo offered this closing thought, “The gear is working out great. It’s been absolutely flawless over the course of two seasons. Since this is not a conventional show in terms of how it’s shot, the environment was really stressful when we were first getting accustomed to everything. Now that everyone is acclimated to the process, we can go in and get our work done with full confidence in the equipment’s ability to do what it’s supposed to do. In this business, you’re only as good as your gear allows you to be, and with our Lectrosonics setup, we’ve had tremendous success.”

For additional information about Stephen A. Tibbo, CAS, visit him online at www.tibbosound.com.