A unique entrepreneurial culture from the very start 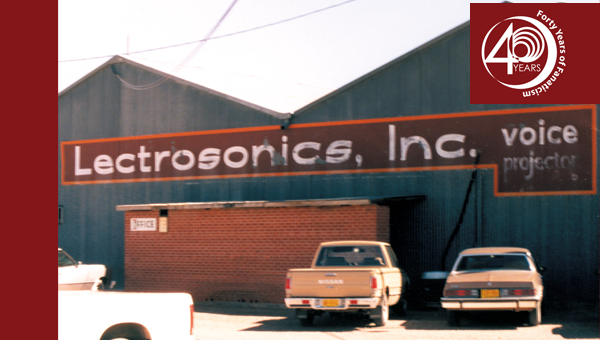 Lectrosonics’ first product was the Voice Projector series of portable PA systems and lecterns. In 1975, the company’s first wireless microphone was added to the product line. Shortly thereafter, these products were marketed under the Freedomike® trademark.

By the 80’s, Lectrosonics found success in the broadcast market with its plug-on transmitter and compact receiver for electronic news gathering and documentary production. Around this same time, the company’s engineering team had begun working on audio processing equipment targeted at the installed sound market. The first product was the MAP or Modular Audio Processor system, consisting of a card cage design with a variety of automatic mixing, signal processing and logic control modules. Newer products such as the company’s DM and ASPEN Series audio processors are now a staple in the A/V marketplace.

The wireless IFB (or interruptible foldback) system was introduced in the late '90s and became a workhorse product in broadcast and film production. By 2002, the company’s highly acclaimed Digital Hybrid Wireless® technology was introduced and Lectrosonics grew dramatically.

Today, Lectrosonics products are a staple of the broadcast and film production communities and are regularly found throughout the music industry as well as live sound reinforcement for the pro touring, installed sound, and church markets. Similarly, the company continues to expand into new market segments—most recently with the introduction of the Quadra IEM system.

Larry Fisher, President of Lectrosonics, reflected on the development of the company. “After 40 years with no acquisitions and no mergers, an energetic attitude and the spirit of innovation continues here at Lectrosonics,” notes Fisher. “To this day, we still manufacture everything right here in our plant, from metal and plastic parts to surface mount electronics along with final assembly and testing. We’ve been extremely fortunate and I’m very proud of the entrepreneurial culture that exists throughout our organization.”