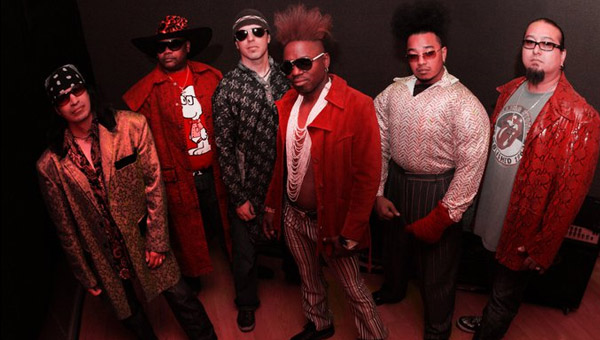 Rio Rancho, NM – February 2011… Airing Friday nights at 2 AM, The After After Party with Steven Michael Quezeda & The James Douglas Show is the CW network's late night TV offering throughout the southwestern U.S. Adopting a talk show format similar to the late-night programs the country has grown familiar with, host Steven Michael Quezada is a 5-time NMHEA Comedian of the Year who also plays "Gomez" on the Emmy Award winning AMC series Breaking Bad. The house band for The After After Party is 6-time Grammy nominated funk band and Universal recording artist, The James Douglas Show. Keeping the music vibrant is no small task and, to ensure everything goes as expected, The James Douglas Show's lead vocalist and bassist employ the new Quadra wireless IEM (in-ear monitor) system from Lectrosonics.

"The ability to have your own, wireless, personalized monitor mix while performing is a huge advantage for musicians," explained Fowler. "Unfortunately, the IEM systems I've encountered prior to the Quadra weren't particularly effective in terms of their sound quality or their ability to manage the mix. This is where the new Quadra really shines. With a user friendly interface and the ability to operate in either 2- or 4-channel mode, the Quadra takes IEM systems to a whole new level. Presently, James and I are the only two using the system, but we have plans to expand beyond that before long."

In their current Quadra configuration, lead vocalist James Douglas and Fowler share a single M4T half-rack transmitter that feeds two M4R diversity belt-pack receivers. "Right now, we're each operating in 2-channel mode," says Fowler, "and our transition to the equipment is an ongoing process. As we expand the Quadra system, we'll start working in 4-channel mode so that, as an example, I could have the main mix in channels one and two while my vocals and bass each feed channels 3 and 4. This way, I'll have precise control over how much 'me' I want in my monitor mix. For the time being, James and I are each taking a 2-channel feed from the monitor console. Even though we're not yet using the system to its full potential, the sound quality, ease of use, and reliability is far superior to any other IEM system we've tried."

Fowler reports the Quadra's user interface is fast and intuitive. "It's great," he said. "At a recent gig, my bodypack receiver accidentally got switched from channels 3 and 4 (my mix setup) to channels 1 and 2. The moment I realized something had changed, I entered the menu system on the receiver, located the channel assignment page, and switched the unit back to my channels. While I was working with the unit, I was also able to change my limiter settings and the backlight options. I effectively personalized my receiver unit right there on stage, without using the manual—all while the show continued."

James Douglas, the band's lead vocalist, echoed Fowler's enthusiasm for the Quadra. "The sound of the Quadra is amazing," he said. "You simply have to hear this system to fully appreciate it. It's like having a conversation with a friend, but in stereo. There's no struggling to hear clearly at all—the sound comes to you, as opposed to trying to force the issue as with other systems. Secondly, the build quality is terrific. The weight of the unit conveys a solid feel and it looks beautiful. The machine work is phenomenal. This unit has changed my life in terms of how we approach live music."

When Fowler was asked about his initial experience with the equipment, he offered the following, "Since December when we began using the gear, I've been really impressed—not just with the equipment, with Lectrosonics as well. There's no time to troubleshoot on the road. The gear needs to work reliably and, if I have a question, I need answers quickly. The Lectrosonics support staff understands this. They're extremely knowledgeable and they understand the application. When I called, they understood what I was trying to accomplish and they helped get me squared away in no time at all."

Before turning his attention back to the business of the day, Fowler summarized his experience with Lectrosonics' new Quadra IEM system. "I believe the Quadra is well on its way to becoming the new industry standard," he said. "With four channels of personal mixing capability in a single bodypack receiver, it's the ultimate monitoring tool for anyone on stage. In terms of reliability, I don't believe you'll find a better IEM system—its sound quality and signal strength are first rate. You'd be hard pressed to find any wireless IEM system that works this well."