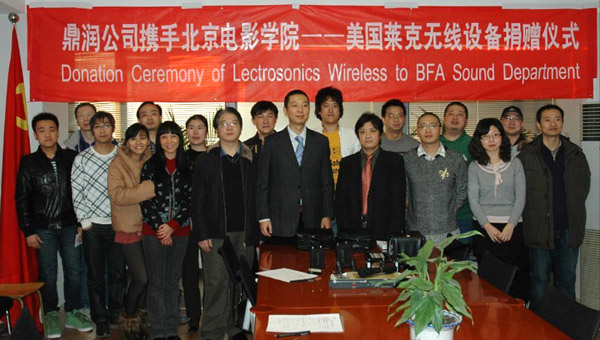 Beijing, China – February 2011… Founded in 1950, the Beijing Film Academy is at the heart of China’s burgeoning film industry and is currently the only specialized institution of its kind in China’s higher education system. Highly regarded for its contributions to the art of film, numerous graduates of the academy have won international acclaim for their cinematic efforts. In recognition of the academy’s achievements and to foster more opportunity for the students, there was a special, January 1st ceremony on campus where Lectrosonics equipment was donated to the academy’s sound recording department.

Dingrun Tong Tech Limited’s Jessie Zhou commented on the recent ceremony. “As an agency for Lectrosonics,” Zhou said, “we feel very honored to introduce your products to the teachers and students at the Beijing Film Academy. Lectrosonics has become Hollywood’s preferred brand because of the high-quality, good performance, and reasonable price of your products, and I am confident this equipment will serve as a solid foundation for future Lectrosonics users.”

More Technologies’ Randy Powell echoed Zhou’s enthusiasm, “Thank you, Lectrosonics, for your generosity in presenting China film students (and just as importantly, their instructors) the sound gear that will set their standards high. The opportunity to work with much of the same equipment that Hollywood’s top sound techs use will serve as tremendous motivation for everyone at the Beijing Film Academy Sound Recording Department.”

For more information about the Beijing Film Academy, go to www.bfa.edu.cn/eng/EIndex.htm. To learn more about Dingrun Tong Tech Limited and More Technologies, Inc., visit their respective websites at www.dingrun.com and www.moretec.net.