Lectrosonics At The Heart Of The Action With Dateline NBC 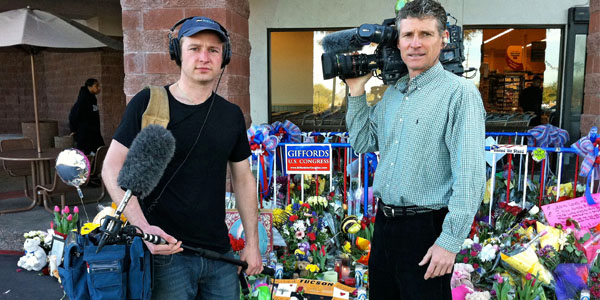 Albuquerque, NM – January 2011… When it comes to audio for television field production, there is little margin for error. A miss here can mean the difference between a great spot on the evening news or none at all. For Carey P. Moots, a seven time Emmy® Award recipient who has earned more than one hundred local, regional, national, and international awards for photography, editing, producing, and reporting, having confidence in one’s equipment to deliver at those crucial moments is what it’s all about. That’s precisely why he depends upon Lectrosonics wireless microphone technology to get the job done.

Working for all the major broadcast networks both domestically and internationally, Moots finds himself at the heart of some of the most riveting stories in broadcast journalism. Such is the case with two recent projects: a Dateline NBC episode called Somebody’s Daughter and on-site reporting for ABC News from Tucson, AZ, scene of the recent shooting tragedy that left six people dead and Arizona Rep. Gabrielle Giffords seriously wounded. On both projects, Moots relied on his Lectrosonics SRa5P dual channel slot mount ENG receiver coupled with SMQ and SMDa Super Miniature beltpack transmitters. Additionally, he uses a Lectrosonics UCR195D diversity receiver and a UM195B beltpack transmitter to round out his wireless equipment arsenal.

Moots discussed his work on Dateline NBC’s Somebody’s Daughter, “This was a story about a number of women in the greater Albuquerque, NM area who have gone missing in recent years. Several bodies have been discovered and there appears to be a serial killer involved. We used a jib (a telescoping boom device with a camera on one end, and a counterweight and camera controls on the other) on this project and the SRa5 could not have been a better choice for this assignment.”

“We were conducting a number of standups using the jib and it was so nice not to run any cables down the jib arm from the camera to the sound mixer,” he continued. “When the camera is moving around a lot, cables tend to create a variety of problems. The SRa5 mounted on the camera is a perfect setup as I’m not physically tethered to my sound technician—I work wirelessly between the mixer and the camera. Both channels were operating and we were able to shoot the standups without the limitations typically encountered with wires. The Lectrosonics gear worked flawlessly. There were no issues with audio on any of the takes.”

The SRa5 receiver and the SMQ and SMDa transmitters all utilize Lectrosonics’ highly acclaimed Digital Hybrid Wireless® technology, which uses a proprietary algorithm to encode 24-bit digital audio information with no compression and low distortion into an analog format that can be transmitted in a robust manner over an analog FM wireless link. In addition to pristine sound quality, the Lectrosonics wireless equipment is extremely easy to use in crowded RF environments, as Moots explained.

“In Tucson, the area was extremely congested with RF signals because there were literally hundreds of wireless systems in operation with all the news organizations on site,” Moots said. “The ease with which the Lectrosonics gear scanned, identified, and locked down available frequencies worked incredibly well. There were so many frustrated crews that were unable to use their wireless systems and, ultimately, resorted to using cables. By contrast, we literally did a frequency scan, found the open frequencies, and locked them in. It was so great to be able to use the Lectrosonics equipment in that kind of environment and have it perform so well.”

Moots has been an avid Lectrosonics user since the company’s inception forty years ago. During that time, he’s had regular contact with Lectrosonics’ customer and technical services groups, which he describes as first-rate. “They’re fantastic,” he says. “Over the years, they have always listened carefully to what I had to say and have been terrific in their response, be it service, advice, or technical assistance. The Lectrosonics folks really listen to the opinions of people like myself and then use that information to design and manufacture products that address the types of issues we encounter in the field.”

Reflecting on his recent successes with his Lectrosonics gear, Moots offered this parting thought, “On both projects, I couldn’t have asked for a better outcome. The freedom of movement that the SRa5 offers when working with a jib and the ability to quickly and easily identify open frequencies in a crowded RF environment are nothing short of terrific. You simply couldn’t ask a piece of equipment to be more versatile.”

To learn more about Carey Moots, visit him online at www.mootsproductions.com.