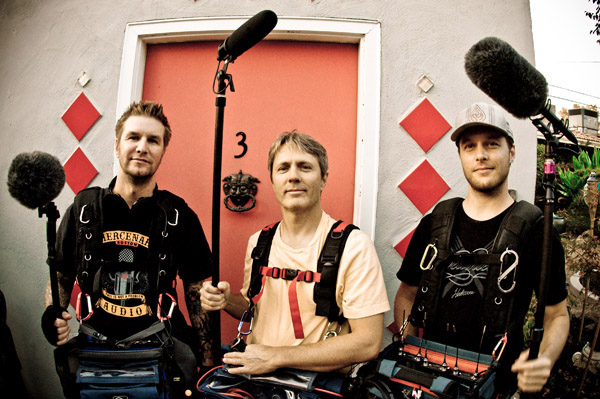 Sacramento, CA… Reality TV is all the rage these days and those shows that offer insightful tips and tricks for do-it-yourself home improvement enthusiasts are extremely popular. Such is the premise for House Crashers,Bath Crashers,Yard Crashers, and Turf War—all of which are produced by The Idea Factory and aired on the DIY and HGTV Networks. The premise behind most of these shows is such that the show’s host ambushes homeowners while they're home improvement shopping. When the host identifies the ultimate home improvement challenge, he follows the lucky homeowner home and performs a total overhaul. Capturing the host’s remarks or the subjects’ reactions isn’t something that can be rehearsed. Spontaneity is key to capturing the essence of what takes place—and to insure nothing is missed, Lectrosonics wireless microphone technology is an essential ingredient of the production process.

Sacramento, CA-based Location Sound Engineer Palmer Taylor is one of the key sound technicians behind the scenes. With a background in music composition and recording, Taylor got his start in the location sound business by working on a documentary titled Rivers of a Lost Coast, which was narrated by Tom Skerritt. Subsequently, he was mentored by local sound engineers Jimmy Bell and Rob Neely—both of whom are also involved in location sound for the ‘Crasher’ shows and were integral parts of pioneering the audio work flow for the shows. Bell and Neely are also enthusiastic Lectrosonics users. Today, Taylor is an integral part of the location sound crew and his Lectrosonics equipment plays a pivotal role in the shows’ production.

When queried about those qualities of his Lectrosonics equipment that he considers most notable, sound quality and rugged performance appeared at the top of Taylor’s list. “Lectrosonics’ sound quality is first rate—rivaling the quality of a cabled microphone,” he stated. “I’ve also been extremely impressed with the equipment’s reliability. The build quality is really solid and it never lets me down. It’s not uncommon for me to have my wireless mics across the yard or behind several walls within a house and yet dropouts are non-existent. The range of this equipment is one of its most impressive traits.”

Taylor is equally enamored with the ability of his Lectrosonics equipment to identify and lock in available frequencies. “Recently, I was on a show where we had more talent than we did wireless receivers,” Taylor explained. “By coordinating frequencies in advance and assigning those frequencies to the various talent, I was able to pre-program those frequencies into my UCR411a receiver and then step through my ‘presets’ using the arrow keys. This is a really useful feature when there are more transmitters than there are receivers. This way, as the various talent came into view, I could quickly change the receiver’s frequency and seamlessly catch the talent’s dialog for the time they were on camera. When someone else entered the picture, I just switched the frequency on the receiver again.”

The Lectrosonics SM Series transmitters can be accessed remotely and, for this application, Taylor has turned his iPhone into a remote control. “I’ve downloaded Lectrosonics’ free RM sound files to my iPhone,” he said, “which can be played back from any MP3 player. In doing so, I have the ability to control lock, unlock, sleep, and unsleep functions on my SMQV transmitter. These features are extremely convenient since I don’t have to physically touch the transmitter to make my changes.”

As he prepared for another day on the set, Taylor summed up his Lectrosonics experience, “I’ve been very impressed with Lectrosonics. Whenever I’ve called in for advice or assistance, the support technicians clearly understood what I’m looking to accomplish and were able to assist quickly and efficiently. Location sound work involves being able to capture your subjects the first and every time. There’s really no margin for error. Thanks to the features and reliability of my Lectrosonics gear, my clients are very happy with the quality of the work I deliver.”

For more information about Palmer Taylor, visit him online at www.blackdoveaudio.com.