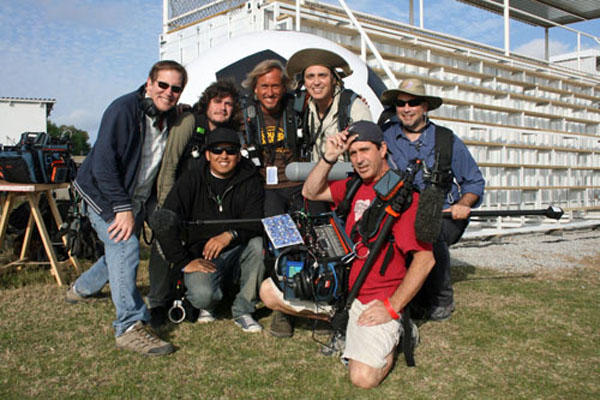 Cape Town, South Africa… To coincide with the recent FIFA (Fédération Internationale de Football Association) World Cup soccer games, Budweiser recently assembled an original web series called Bud House (http://www.youtube.com/budunited). Featuring 32 fans from 32 countries—all living in the ‘Bud House’ in South Africa—the show’s participants ate, slept, played and lived soccer together. The winning ‘fanatic’ travelled to the World Cup Final in Johannesburg and presented the Man of the Match trophy to the final team’s MVP (Most Valuable Player) at the conclusion of the game.  This was reality TV at its most extreme and the show’s sound was highly dependent upon the skills of Steve Bedaux and his arsenal of Lectrosonics wireless equipment.

On the receiving side, eight UCR 411a compact receivers were used in each of the crew’s audio field bags. Another two UCR 411a’s were used on each of their six main cameras, with another three UCR 411a’s assigned to the story producer cameras.  In all, there were over 75 UCR 411a’s covering seven different blocks. Completing the picture, Lectrosonics Venue receiver systems stocked with VRT modules and UDR200C diversity receivers were deployed in the Control Room. “In all,” Bedaux reports, “we used over 56 coordinated wireless transmitter frequencies daily.  Since this was a non-elimination reality show, all of the wireless needed to work 24/7 for 32 consecutive days of production. RF coordination was tight, but with Lectrosonics’ wireless and special coordination software, I knew it could be done.”

“Due to time and budget constraints,” Bedaux continued, “I was unable to personally perform a standard pre-production RF site survey at any of the excursion locations or at our secret Bud House resort location. Fortunately, Lectrosonics introduced me to Jeff Hodd at Stratosphere in Cape Town. Jeff is a sound mixer and also serves as Lectrosonics’ representative for all of South Africa. He saved the day! Through many detailed emails, Jeff and I were able to communicate my audio requirements for the project. Jeff took time out of his schedule to perform our crucial RF surveys and he also conducted cable run measurements at the Bud House location.”

In addition to the relative ease of coordinating all those RF signals, Bedaux is equally enthusiastic about several other aspects of the Lectrosonics equipment. “One of the many attributes of Lectrosonics’ equipment— especially in the field of reality TV—is that it is bullet proof, extremely reliable, and the sound quality is unbeatable. The equipment’s range is amazing, especially with the new SMQV in ¼ watt mode. If a transmitter can handle an extreme reality TV cast such as the Bud House fanatics, it can handle any reality show. When I am mixing on location thousands of miles away from home, equipment down time is not an option; I know I can always count on Lectrosonics.”

As he turned his attention to other pressing business matters, Bedaux offered this final thought. “Within just three weeks of being hired by RSA Films, in partnership with VidCam, I was able to design, coordinate, build, test, and ship four tons of audio equipment to South Africa. I could not have done this project without all of the additional technical support of the VidCam Team—Clay Harris and Mark Gouldy (Bud House Lead Field Mixer)—and the amazing organizational skills from my lead A2 and mixer Bryan Diaz. Being a long time owner/operator of Lectrosonics wireless products, I have come to trust and rely upon this equipment. Whether I’m mixing a reality show with over 56 RF frequencies, supervising a live Good Morning America Broadcast at the Oscars, or mixing a high profile interview with Charles Gibson and Sarah Palin, I know that Lectrosonics always has my back.”

For additional information about Steve Bedaux, C.A.S., visit him online at www.CineLUX.tv.