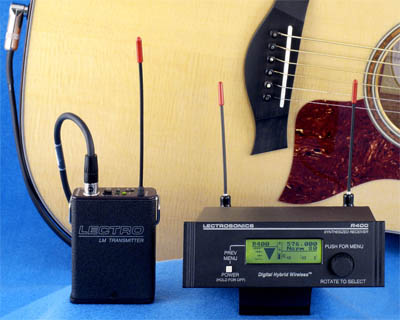 RIO RANCHO, NEW MEXICO : Lectrosonics, the New Mexico-based innovator of high-end wireless technology for the broadcast and film industries, introduced the IS400 Digital Hybrid Wireless Instrument System at the 2005 Winter NAMM Show on January 20-23 at the Anaheim Convention Center.

The Lectrosonics IS400, designed for use with both electric and acoustic instruments in demanding live performance environments, uses a proprietary digital algorithm to encode the audio signal into an analog format for transmission along an FM wireless carrier. The IS400's receiver captures this signal and converts it back into digital audio via DSP. The result is that the IS400 offers a matchless balance of digital audio quality and the immense operational range of the finest FM wireless systems. Further, the IS400's means of operation effectively eliminates the need for a an analog compander circuit along with the normally corresponding signal artifacts, and provides superior audio dynamic and frequency response when compared to analog systems.

The IS400's 50mW IM transmitter and R400 diversity receiver are both housed within rugged, all-metal casings for long-lasting use in demanding gigging and touring. On its front panel, the R400 receiver features a graphic display for simple selection of transmission frequencies, an adjustment knob and power switch. On the unit's rear, a balanced XLR and unbalanced quarter-inch jack are provided with independent volume control via the comprehensive front panel menu for simultaneous connection to a balanced input and a guitar amplifier. Also on the rear panel is a locking power input connector and two BNC input jacks.

Noted Karl Winkler, Lectrosonics' director of business development: "companded audio normally associated with analog wireless systems has been a well-documented problem for performing musicians, particularly acoustic guitarists and bassists. These musicians have longed for a system that would compete with a standard cable for sound quality, but allow the freedom of movement given by a wireless system. Our Digital Hybrid system provides the best of those two worlds."

This exceptional and unique new wireless instrument system was used by top guest artists at the premier of the new Taylor T5 Thinline Guitar Series in the Taylor Guitar performance space at NAMM. The Lectrosonics IS400 Digital Hybrid Wireless System was carefully chosen by Taylor to compliment their award-winning Expression System guitar pickup systems.

The IS400 will be available both as a stand-alone system (including the IM transmitter, R400 receiver, cables, antennas and watertight carrying case) and as a rack-mount system (with IM transmitter, R400-RM rack-mount receiver, cables and antennas). MSRP for each system: $1,625. Availability: March 2005. Since 1971, Lectrosonics has served those in the audio production industry requiring maximum product innovation, build quality and customer service. Used in Academy and Emmy award-winning productions for cinema and television, as well as in audio for theaters, corporate boardrooms and multimedia production, Lectrosonics wireless microphone systems and audio processing products are relied on by users who appreciate the immense dedication of this Rio Rancho, New Mexico-based pro audio firm.