Lectrosonics At The Heart Of The Action On "Killer Elite" 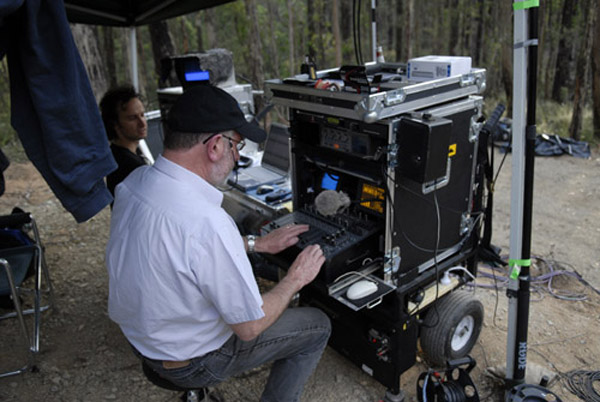 Melbourne, Australia… When Jason Statham, Clive Owen, and Robert De Niro team up for a film project, there’s a darn good chance there will be plenty of action. Such is the case with the currently in production film Killer Elite from Australia’s Omnilab Media, which is based on the premise of a former Navy Seal (played by Jason Statham) coming out of retirement in order to rescue his friend and mentor (played by Robert De Niro). Featuring lots of fast car action, wireless microphone technology was crucial to capturing location sound and it all happened without so much as a hiccup—thanks to the robust performance of Lectrosonics’ Digital Hybrid Wireless® technology.

Gary Wilkins, CAS, was tasked with capturing much of the action on this project. A veteran location sound mixer of nearly 40 years, Wilkins has worked on movies, TV miniseries and series shows, as well as commercials. Among his numerous credits, he handled location sound for the hugely successful Warner Brothers film Where The Wild Things Are as well as HBO’s epic war miniseries The Pacific, which has received an Emmy® nomination for “Outstanding Sound Mixing For A Miniseries Or A Movie” at this fall’s upcoming Emmy Awards. An enthusiastic user of Lectrosonics wireless technology, Wilkins described his setup.

“Presently, I’m using twelve channels of Lectrosonics gear on my cart,” said Wilkins, “which consists of a spread of models and blocks to accommodate my activities throughout Australia, Asia, and the South Pacific. The heart of my system is a Lectrosonics Venue receiver setup on block 26 for Australian frequency settings. I’m particularly fond of the Venue’s SmartTune™ auto frequency selection feature because it enables me to quickly find the best frequencies for whatever area I’m working in.”

For transmitters Wilkins’ arsenal consists of Lectrosonics MM400a Digital Hybrid Wireless beltpack transmitters as well as UH200 UHF plug-on and UH400a Digital Hybrid Wireless plug-on models. “On this particular job,” he reports, “we often required solid range performance due to a lot of car arrival- and exit-type set ups with dialogue being covered wide and tight on multiple cameras. We rarely had rehearsals, so reliability was a key issue. The equipment had to work the first time and every time. We were under a lot of pressure, but it all worked really well. The producers were happy with the results and it added a kind of gritty, restless quality to the film. I couldn’t have pulled this off without my Lectrosonics equipment.”

Wilkins equipment rack also contains a Lectrosonics UH200 transmitter on Block 27, a set of four Lectrosonics UCR210D outboard receivers and a UCR205D receiver tuned to the same frequencies as his Venue setup. These units are ready to go on short notice and enable him to work over-the-shoulder or inside a vehicle.

Being located half way around the world from Lectrosonics’ home base in New Mexico, USA, quality customer/technical support is crucial to keeping his equipment in top form. Here, too, Wilkins gives Lectrosonics a first-in-class rating. Technical support is vital to running complex setups on feature films,” he said. “You can’t afford to fail, so your equipment must be extremely reliable. Australia is a long distance from the US, but I have total confidence in the company as my backup team. They’ve been extremely responsive when I’ve required assistance and the gear has been rock solid. I still have every piece of Lectrosonics equipment I’ve ever purchased, and it all still works. I wouldn’t part with any of it.”

Reflecting on his responsibilities in the production of Killer Elite, Wilkins offered this closing thought. “It would not have been possible to do this film using the production techniques of the 80’s and 90’s,” Wilkins said. “There were minimal opportunities to use a boom and almost everything is recorded on multiple tracks and wireless—even the booms. This applies not only to sound, but to the entire production. Rehearsals are largely a thing of the past and every one relied on everyone else getting it right the first time. Consequently, the equipment was critical in making this job work. The whole shooting style of the film was built around reliable wireless equipment and my Lectrosonics gear delivered in a big way.”

For additional information about Gary Wilkins, CAS, contact him at This email address is being protected from spambots. You need JavaScript enabled to view it..