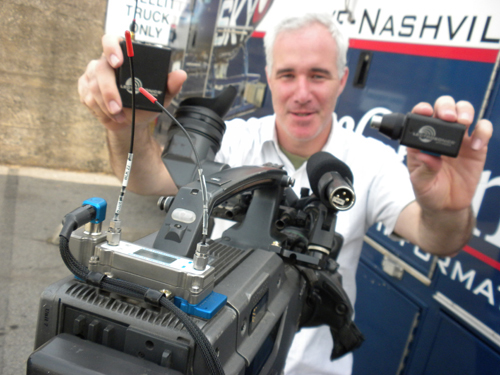 Mike Rose, Chief Video Photographer for WTVF TV supervises a 21-person camera crew for the station’s news operations. He discussed the nature of the team’s work. “We are responsible for all general news coverage, including investigative reporting, sports, and local news,” said Rose. “In this line of work, the equipment is in the field everyday and is used in a variety of shooting situations. In May, Nashville received 17 inches of rain in 48 hours. Every crew was out in the rain, around the clock, filming high water rescues, flood damage, FEMA press conferences…you name it. Equipment performance was critical so crews could focus on the story. We never had wireless issues.  These were by far the most extreme, humid, conditions I have ever worked in. Failure was not an option. Because of the robust nature of the wireless units, we were able to tell some incredible stories.”

Rose reports that in addition to the equipment that had to be replaced to address the FCC ruling, every camera operator also had a Lectrosonics CR185 compact receiver, an M185 beltpack transmitter, and an H185 plug-on transmitter in their kit. “These systems have been in service for a long time,” notes Rose, “so we already had a high level of confidence in Lectrosonics products.”

Ultimately, Rose purchased 19 Lectrosonics SRa5P dual channel slot mount ENG receivers, 19 HM plug-on transmitters, and 19 UM400a beltpack transmitters from Nashville’s Trew Audio. All products employ the company’s legendary Digital Hybrid Wireless® technology, which uses a proprietary algorithm to encode 24-bit digital audio information with no compression and low distortion into an analog format that can be transmitted in a robust manner over an analog FM wireless link. “By getting our new Lectrosonics SRa5P dual channel receivers, along with our HM plug-on and UM400a beltpack transmitters,” said Rose, “every operator now has two systems available—and all of it Lectrosonics.”

After roughly six months of field time with their new Lectrosonics equipment, Rose has nothing but praise for both the gear and Lectrosonics’ customer/technical support services. “I’m particularly impressed with how easy it is to change frequencies,” he says. “This is great for those times when you want one microphone to feed multiple cameras. Over the years, I’ve been equally impressed with the company’s tech support. On those occasions when I’ve need something adjusted or a firmware update, the company has been very responsive. A tech always calls to advise me what work has been performed and the equipment has been returned very quickly.”

The ultimate compliment, however, was Rose’s take on Lectrosonics sound quality. “When I watch the news at home in the evenings,” he reports. “The audio is clear, I’m able to hear all the sound bytes that I know should be there, and I don’t hear any RF interference. Sound quality is first rate and that’s the bottom line. When I watch the news, I want to be able to close my eyes and visualize the story by way of the sound—and our Lectrosonics gear gets us there.”

To learn more about WTVF NewsChannel 5, visit them online at www.newschannel5.com.