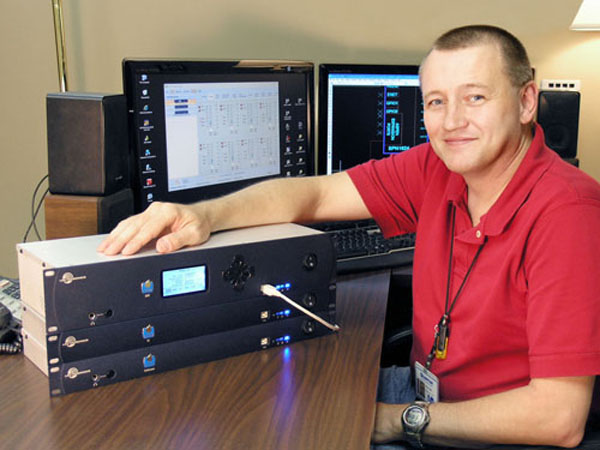 Rio Rancho, NM… Lectrosonics, recognized the world over as a leading manufacturer of wireless microphone systems and audio processing products, has had its day in Federal Court and the outcome is extremely positive. The company’s newly introduced ASPEN Series digital audio processing products were recently deployed throughout the courtrooms in a major Western U.S. Federal Courthouse with resounding success. Working from a blueprint penned by Spectrum Engineers of Salt Lake City, UT, Huntsville, AL-based Quantum Technologies, Inc. installed, configured, and programmed the new equipment as part of a massive audio upgrade to accompany a recent refurbishment of the facility’s video infrastructure.

Quantum Technologies specializes in professional audio and video systems for a wide variety of applications, including Federal Courtrooms, corporate boardrooms, conference centers, and houses of worship. Michael Bartee, Audio-Video Systems Engineer for Quantum Technologies, was directly involved in all aspects of the installation, which encompassed the configuration and programming of fourteen courtroom systems, each with a Lectrosonics  ASPEN Series SPN1624 Digital Matrix Mixer, SPN16i Input Expander, and SPNConference Interface unit. He discussed the challenges of the project.

“Each of the fourteen systems required automixing and mix minus matrix mixing for both different zones throughout the courtrooms as well as for multitrack recording (documentation of court proceedings) purposes,” said Bartee. “Further, automatic feedback elimination on every microphone input was another important consideration.  While the courtroom deputy and judge both have the ability to recall multiple configurations— such as a bench conference—at the touch of a button via an AMX® control system, the system is for all intents and purposes unattended.”

“I was extremely impressed with the ASPEN system’s DSP processing power,” Bartee said. “Whatever we needed—be it EQ, delay, limiting, feedback elimination, and so forth— we were able to set up processing without any fear of running out of processing power or sacrificing system performance due to DSP limitations. This is, unquestionably, one of the ASPEN system’s major advantages. Similarly, the SPN16i is extremely beneficial. Each courtroom uses roughly twenty-four inputs and this unit provided the additional input capability without having to use two mixers and their redundant outputs.”

Being a new line of audio processing products for Lectrosonics, the Federal Court installation project was one of the first ASPEN Series installations. Though he was installing and configuring an entirely new line of equipment, Bartee reports the project went very smoothly—thanks, in part, to Lectrosonics’ capable technical support services.

“Lectrosonics technical support was a pleasure to work with,” says Bartee. “They were very responsive and eager to ensure the equipment performed above and beyond the requirements of the installation. I was on the phone regularly with the company’s engineers throughout the programming and configuration phase of this project. I sent them files for review to ensure we were optimizing the performance of these systems and, in each instance, they were extremely helpful. Gordon Moore, Vice President of Sales for Lectrosonics, even conducted an online training tutorial to better acquaint me with the GUI (graphical user interface) before I even started the programming.”

Installed during the early part of 2010, the new Federal Court sound system became operational in March and has received rave reviews from all who encounter it. According to Bartee, “Everything has been working wonderfully. The sound quality is excellent and everyone is very pleased. The teleconference unit’s performance is superior to any product we’ve previously used. When I first received teleconference test calls, I thought the client was pulling my leg—I honestly believed they were on the phone rather than on a microphone. The new system’s performance is exceptional. Lectrosonics is a world-class company and they genuinely care about producing top quality products that both meet and exceed one’s expectations.”

For additional information about Spectrum Engineers, visit them online at www.spectrum-engineers.com. To learn more about Quantum Technologies, Inc., visit the company at www.quantumtechnologiesinc.com.