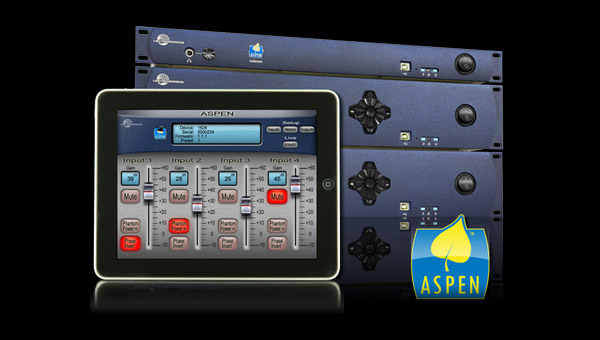 Rio Rancho, NM – InfoComm Booth #C6324… Lectrosonics, recognized the world over as a leading manufacturer of wireless microphone systems and audio processing products, is pleased to announce the release of a developer’s kit for the Apple iPad to be used as a control interface for the Aspen Series of DSP matrix mixing processors. The developer’s kit consists of a library of faders, knobs, meters, and other on-screen objects used for the creation of custom interface designs using Command Fusion’s iViewer software. Aspen users with a custom-designed interface on the iPad can update any system parameter wirelessly using the touch screen while receiving real-time feedback as to the system’s status.

iViewer 3.3, a free software download released in April and available online the Apple App Store, has already received rave reviews for its ability to transform an iPad into a control interface for home or commercial automated systems where units in the system are addressed via TCP/IP over Ethernet. Developers can use iViewer for free with a single landscape-oriented and a single portrait-oriented page. Multi-page designs require a licensing fee.

“We’re excited about the customization potential of the iPad as a control surface for Aspen” notes Karl Winkler, director of business development at Lectrosonics. “The new developer’s kit for use with iViewer software puts a lot of power into the hands of the users. I expect we’ll see some truly innovative solutions coming from designers and installers with this combination of products.”

The iPad developer’s kit will include sample configurations and tutorial videos, and will be available for download from the Lectrosonics web site in the Aspen Support area in July, 2010.