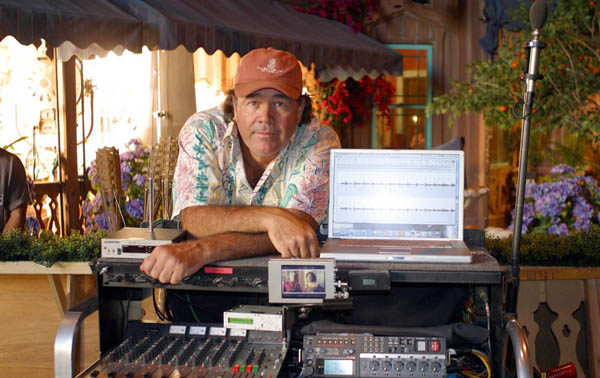 HOLLYWOOD, CALIFORNIA: Featuring a dynamic, hilarious, and star-studded ensemble cast, "Meet The Fockers" is arguably the first certified hit film of 2005. The film, directed by Jay Roach, is a follow-up to 2000's "Meet The Parents" and welcomes back many of the first installment's cast members including, Robert De Niro, Ben Stiller, and Owen Wilson. "Meet The Fockers" finally allows moviegoers to meet the parents of Greg Focker (Stiller). As a result, the cast has been amply and successfully augmented with the addition of Dustin Hoffman and Barbra Streisand as Bernie and Roz Focker.

According to production sound mixer, Kenneth McLaughlin, "Meet The Fockers" presented a significant challenge for him, one he hasn't similarly experienced in his 25-year career. "This was the hardest film I've ever worked on," fondly recalls McLaughlin. "There was this enormous amount of talent, all of which wanted to contribute beyond the script. For instance, there was the scripted dialogue happening for some actors while other actors in the background felt the need to talk, too - completely ad-lib stuff. The only way that you could get all of that, since you didn't even know that it was coming, was to record it all on a six-track recorder, leaving them on pre-faders. So, no matter what anyone said, I captured it."

It took McLaughlin only a short while on the set to realize that each actor in the many ensemble scenes must be individually recorded via a wireless microphone. And for that, he chose to exclusively use Lectrosonics 200 Series Wireless Microphone Systems recorded to a Fostex PD-6 DVD-RAM location recorder. "After the first couple of days I thought, 'Oh my God. I really need to mic these people more than I normally would,'" he explains. "I normally choose to use boom mics, but when you have huge ensemble scenes where everyone is sitting around the table and all ad-libbing to build the scene, you have to get it all. You couldn't do that using boom mics. It wasn't just one star that we were concentrating on to get the dialogue - there were six principals in almost every scene!"

"The post and editorial people loved it," offers McLaughlin. "All this special and unscripted dialogue that contributed to the texture of the film was there. You wouldn't have even known that it existed because you didn't hear it until you went back to listen. You may have thought, 'What did Dustin say there?' Then find that Barbra also said something really funny during the scripted dialogue."

McLaughlin confirms that he has been using Lectrosonics 200 Series wireless systems for some time and finds that they offer both the reliability and power requirements that he desires. "I've had the Lectrosonics for quite a while and have probably used them more than any other transmitter/receiver," he explains. "I feel really comfortable using them. I've made them work at a range of almost a whole mile in perfect conditions on a beach near the water. Sometimes they've completely surprised me. I also really like that they put out more than 100 milliwatts. I believe that they were one of the first manufacturers to make extra power available to the consumer. And that's very important in avoiding radio hits. You don't want to have to tell Dustin Hoffman, 'You're going to have to loop this line because the radio took hits as you were walking.'"

Because of the plethora of clean dialogue tracks gathered via McLaughlin's Lectrosonics 200 Series wireless rig, ADR was kept to a minimum. "In talking to the editor the other day, I found out that almost all of it is production sound," explains McLaughlin of the film's dialogue. "There were only a couple things that we had to loop, and one of those we even knew about in advance. It was a scene where they were riding around in a convertible. The only other instance of ADR was when they needed to drop in a few words where there was an actual dialogue change."

And yes, says McLaughlin, "Meet The Fockers" was just as much fun, maybe even more so, to work on as it is to watch. "When you go see this film, I think that it's clear that everybody had a really good time. You can always tell when a film was fun to make, and this one certainly was. Every day at work was a blast."