Lectrosonics On The Move With New York Racing Association 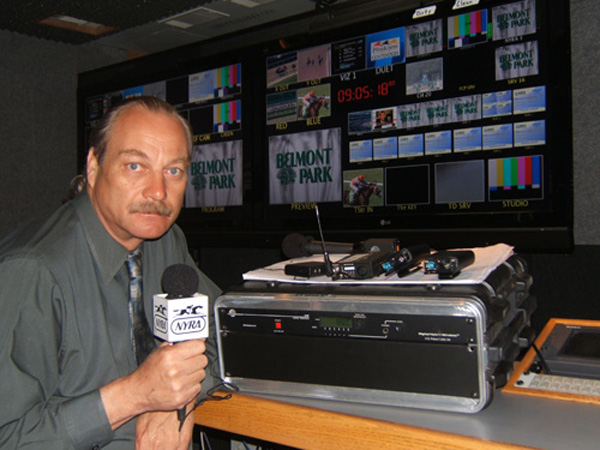 Elmont, Long Island, NY – May 2010… When it comes to horse racing, you’d be hard pressed to find anyone unfamiliar with venues such as Belmont Park, Aqueduct Racetrack, or the Saratoga Race Course. All three properties are operated by the New York Racing Association, Inc. (NYRA), the not-for-profit corporation that runs the three largest thoroughbred horse-racing tracks in New York State. Depending upon who one speaks with, betting on the horses is serious business—or is seriously fun. Either way, betters rely on closed circuit television feeds to make informed decisions—such as handicapping considerations— before placing their hard earned dollars on the line. This information comes by way of interviews and, for this purpose, the on-air talent use wireless systems from Lectrosonics.

Robert Mohan is Chief Engineer of Television Operations for the New York Racing Association. He is ‘the guy’ responsible for ensuring that feeds to the stewards (the race track ‘referees’) are available and recorded for each race. Similarly, he oversees the simulcast feed – sent via satellite from the track to almost 1,000 sports books and race tracks throughout North and South America and is also responsible for ensuring feeds to over 4,500 TV sets for betting purposes. He discussed the challenges of NYRA’s broadcast operations and why Lectrosonics equipment plays such a vital role.

“We routinely go from one race complex to another,” Mohan explained, “and because of this, our equipment resides in three 53-foot remote trucks and two transportable uplinks. Mobility is critical. In addition to operating among the three complexes, we also require freedom of movement within each race track. While we have in-house studios at each location, we constantly conduct interviews and reports from the paddock (the area adjacent to race track for race preparation, etc.), various track side locations, and the Winners Circle—so the on-air talent are constantly on the go. For this purpose, we make extensive use of our Lectrosonics wireless IFB (Interruptible Feedback) and microphone systems.”

The NYRA’s wireless arsenal presently consists of a Lectrosonics IFB T4 Frequency-Agile Compact IFB Transmitter and multiple R1a IFB beltpack receivers for communication between the talent and the production staff. Additionally, the talent are outfitted with either Lectrosonics LMa beltpack transmitters or HM plug-on transmitters—depending upon the application. These transmitters feed a Lectrosonics Venue receiver system that is currently outfitted with two channels of VRS receiver modules. All equipment incorporates Lectrosonics’ highly acclaimed Digital Hybrid Wireless® technology, which uses a proprietary algorithm to encode 24-bit digital audio information with no compression and low distortion into an analog format that can be transmitted in a robust manner over an analog FM wireless link. Lectrosonics ALP500 shark fin and SNA600 dipole antenna kits are deployed to ensure the best possible reception.

Mohan discussed his decision to use Lectrosonics equipment, “I previously worked as a broadcast systems design consultant and, over the years, I’ve encountered a lot of wireless issues. I can attest that Lectrosonics gear offers bullet-proof reliability, has robust build quality, and is highly adaptable in terms of frequency coordination, which was a paramount consideration. Our Aqueduct track is immediately adjacent to New York’s JFK airport, so this is as rich an RF (radio frequency) area as you’re likely to encounter.”

“In the two years we’ve been working with this equipment at NYRA, I’ve yet to encounter a single problem,” Mohan continued. “Lectrosonics field support has been terrific. Howard Kauffman (the New York area field representative) visited and scanned the area, then provided the best frequency settings for each location. From that first day, it’s been smooth sailing. I have my frequency charts for each one of the tracks, and everything works flawlessly. Simply put, the company’s technical support is second to none.”

As Mohan began to map out another day’s activities, he offered this parting thought. “I love the fact that the Lectrosonics Venue system is expandable,” he said. “Later this summer, we plan on adding more wireless channels and it’s nice to know the Venue mainframe can accommodate up to six channels in a single rackspace. That enables us to grow our wireless capability without growing the equipment racks that house the gear. I am 110% satisfied with every aspect of our Lectrosonics equipment and look forward to obtaining more.”

For additional information about the New York Racing Association, Inc., visit them online at www.nyra.com.