“Cabled” sound quality and robust performance make all the difference 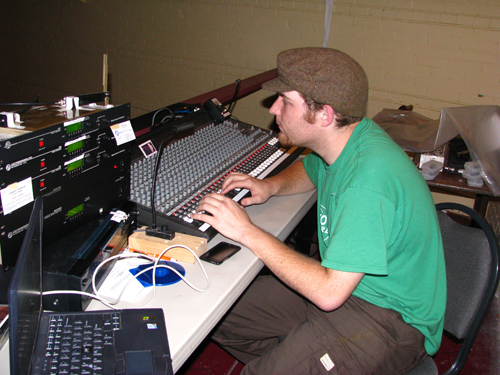 Albuquerque, NM… When you combine a culture and heritage that is rooted in centuries of history with blue skies and sun that shines 310 days a year, it comes as no surprise that the creative arts flourish in Albuquerque. Theater is alive and well here, with three exceptional community theaters—the Albuquerque Little Theater, the Vortex Theater, and the Blackout Theatre—each presenting a wide range of program offerings. At all three venues, the sound has a clarity and presence not commonly found at the community theater level, thanks in large part to the engineering skills of Josh Bien and his arsenal of Lectrosonics equipment.

Josh Bien serves as Assistant Technical Director at the Albuquerque Little Theater, as well as Technical Director for both the Vortex and Blackout. Combine these responsibilities with the fact that Bien is also an actor and one quickly realizes that Josh is one very busy guy. Being actively involved with all three theaters, Bien summarized the personalities of each venue and explained why Lectrosonics wireless technology is so vital to each.

The Albuquerque Little Theater is one of three oldest, continuously running community theaters this side of the Mississippi,” Bien reports. “Currently in its 80th year of operation, the Little Theater hosts a wide range of programming that includes family theater, musicals, and shows. This is a large proscenium theater with seating for nearly 500 people. By contrast, the Vortex is a black box theater (a small, intimate venue that is highly configurable in terms of seating and stage arrangements) that hosts surprisingly varied theatrical fare, though they are not as readily able to accommodate large shows, such as musicals. Blackout is a nomadic troupe—performing whenever and wherever the opportunity presents itself, though we take residency at Albuquerque’s The Box Performance Space.”

“With the rapidly approaching FCC (Federal Communications Commission) ruling that prohibits the operation of wireless microphones in the 700 MHz band,” he continued, “we not only needed to replace a fair amount of our older wireless equipment at the Albuquerque Little Theater, we wanted equipment that didn’t have that ‘wireless’ microphone sound. Upon investigating the wireless products of several companies, I found that, in addition to offering the best performance, Lectrosonics is also used extensively in theatrical applications. Being in charge of sound at each venue, I wanted the best possible equipment and this led me to the company’s Venue receiver systems with a mixture of LMa and MM400C transmitters. Equally important, the Venue’s modular 6-channel design makes it far easier to transport a wireless system, which is important to a nomadic troupe such as Blackout. ”

“Everyone has been really impressed with the Lectrosonics sound quality,” states Bien. “In the past, you could always tell which actor wore a Lectrosonics mic and which had another brand of wireless mic.” Because of the companding that other wireless systems employ, there’s a certain sound quality that’s unmistakable. By contrast, the Lectrosonics Digital Hybrid systems sound far more natural—identical to a wired microphone. Further, the equipment is easy to use. All three theaters rely on a considerable amount of volunteer assistance and Lectrosonics’ ease of operation makes it a cinch to configure the gear and train people how to operate it. Combined with the fact that the equipment is built very solidly and that the transmitters can easily be hidden in the wardrobe, it’s no surprise that Lectrosonics is so well respected among theater professionals.

In addition to the various wireless microphone systems, the Albuquerque Little Theater also has a Lectrosonics DM1624 audio processor that helps simplify mixing chores for the volunteers that find themselves behind the audio console. “The DM1624 enables us to confidently place volunteers at FOH (front of house) because, other than the occasional muting of channels, there isn’t much more that they need to be concerned with,” says Bien. “On that note, Lectrosonics has been a first-class company in all aspects. Technical support provided charts to assist us with frequency coordination on the microphones and they even sent a technician on site to help me set up the DM1624. Given the company’s superior sound quality, performance, and reliability, I can’t think of one good reason why you would consider equipment from anyone else.”

For additional information about the Albuquerque Little Theater, the Vortex, and Blackout, visit their respective websites: www.abqlt.org, http://vortexabq.org, and www.blackouttheatre.com.