Come Fly Away Soars With Lectrosonics 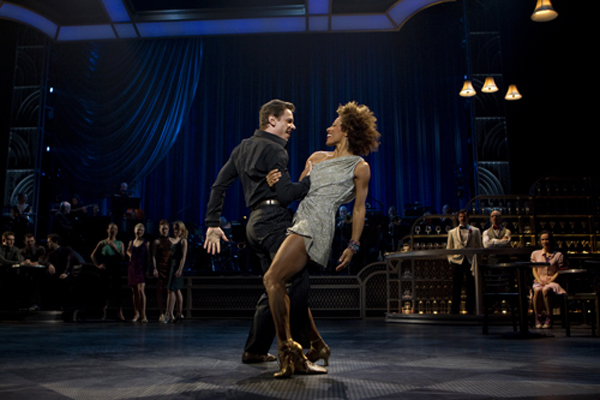 New York, NY…Come Fly Away, the new musical that brings together the legendary music of Frank Sinatra and the creative vision of Tony Award® winner Twyla Tharp, is now on Broadway at The Marquis Theatre. This exciting show combines the seductive vocals of Frank Sinatra with the sizzling sound of a live 19-piece big band and the visceral thrill of Twyla Tharp’s choreography. Fifteen of the world’s best dancers tell the story of four couples falling in and out of love at a swinging nightclub on a sultry summer night, set to a score of beloved Sinatra classics that includes “The Summer Wind,” “Fly Me to the Moon,” “One for My Baby,” “My Way,” “Theme from New York, New York,” and “I’ve Got the World on a String.” The dancing is vibrant; the score swings, and with the sonic performance and freedom of movement provided by Lectrosonics wireless technology, the show sounds great.

“This show uses a live big band and a featured vocalist that are all performing along to original vocal tracks of Frank Sinatra,” McBoyle explained, “so sound quality is critical and expectations are high. Because both wired and wireless mics are used on this show, I wanted the wireless mics to have indistinguishable sound quality from the wired mics, which led me to Lectrosonics. None of the sonic artifacts typical of other wireless systems that use compandors is present in the Lectrosonics equipment.”

“As an example,” he continued, “we had to move someone from a wired DPA 4099 microphone to a wireless DPA 4099 for an alto sax solo in the song ‘Take Five.’ We didn’t have to touch a thing—no EQ changes at all. We just switched to the Lectrosonics wireless system and continued about our business.”

The Lectrosonics wireless system used on the show consists of eight SMQV transmitters with DPA 4099 microphones for various musical instruments, with two of these being backup systems. There are also two channels (one primary, one backup) of SMa Super-Miniature transmitters for one of the dancers. Further, a Lectrosonics RM remote control is available to assist with the various transmitters’ operation. “The RM is invaluable in a theatrical setting,” says McBoyle. “It enables one to access the transmitter without disrupting the performer. The RF tech thinks it’s great.”

In addition to the ten aforementioned channels, two final channels (primary and backup) accommodate a Sennheiser SKM 5200 handheld transmitter with a Neumann KK 105s capsule. “The fact that the Lectrosonics equipment has an emulation mode that enables it to work with a variety of other manufacturers’ gear adds to its versatility,” McBoyle said. “With its emulation mode, the Lectrosonics system can accommodate just about every imaginable configuration one is likely to require.”

Two Lectrosonics Venue receivers—each stocked with six channels of VRT receiver modules—support the various transmitters. With its ability to house six channels in a 1RU rackspace, the Venue Series receivers played an equally important role in McBoyle’s decision to specify Lectrosonics. “In most Broadway theaters,” he added, “space backstage is at a premium, so the ability to have 12 channels in just two rackspaces is a huge benefit.”

Before turning his attention to other business, McBoyle offered this closing thought, “With a musical of this nature, sound quality is more important than ever. Right from the start, the Lectrosonics gear has performed unbelievably well. People have responded very positively to the sound of the show, and Lectrosonics is a major part of its success.”

For additional information about Come Fly Away, visit the show’s website at www.comeflyaway.com.