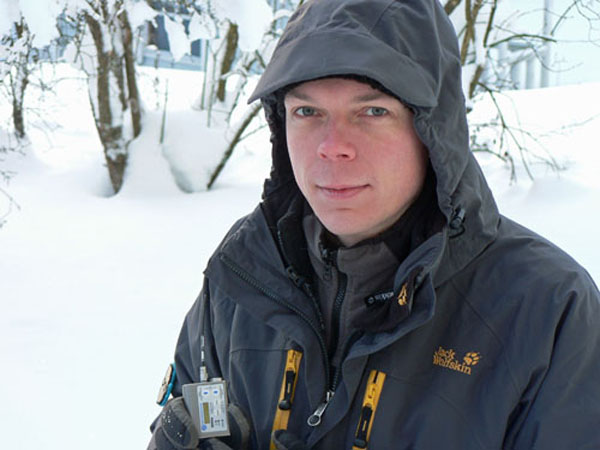 Helsinki, Finland… For those working in film sound production, there are always unique challenges such as rain, dust, and noise to contend with. Finnish winters, however, add a new twist to the never-ending saga of harsh working conditions: extreme cold. Image handling location sound responsibilities in a place where the temperature reaches -27 Celsius / -6 Fahrenheit. Such is the case for sound recordist Tuomas Klaavo, who along with associate Mikko Mäkelä, operates Helsingin Elokuvaäänitys Oy (Helsinki Movie Sound Ltd.). When it’s so cold that cables become stiff and brittle, the time is ripe for a wireless solution, which for Klaavo, means deploying his arsenal of Lectrosonics gear.

Since 2002, Klaavo has worked in both production and post production sound. His credits include Saippuaprinssi (Soap, 2006), Miehen Työ (A Man's Work, 2007), and Erottamattomat (Sisters Apart, 2008). Most recently, he handled location sound for a project titled Lapland Odyssey, a co-production between Ireland’s Ripple World Pictures, Finland’s Helsinki Filmi Oy, and Sweden’s Anagram Produktion company. Directed by Dome Karukoski, the film is a comedic and romantic road movie that moves through Lapland and seeks to explore the soul of the Finnish man.

“My whole kit was made to be as light as possible,” Klaavo explained, “because we didn't want to haul heavy gear in the snow, and this proved to be a wise decision. Basically, I had a bag with the recorder/mixer combo and the Lectrosonics receivers sitting on a light cart. With this arrangement, I could grab the bag and go on a moment’s notice—and many times, I had to do just that. The SRa receivers have an incredible weight / performance ratio and this made them a terrific choice for field work.”

“I’ve worked with this director before and knew there would be a lot of last minute dialogue changes and ad-lib performances,” Klaavo continued. “Because of this, we had to be able to record as many off-camera lines as possible, so we used the Lectrosonics SMa transmitters with lavaliere mics on the actors while, most of the time, the 500 series equipment was dedicated to two booms.  By using wireless booms, we eliminated stiff cables and thanks to our light, compact setup, we were able to move quickly between setups.”

Klaavo notes that his Lectrosonics equipment delivered stellar results on the Lapland Odyssey project—despite the severity of the weather. “I’ve learned that Lectrosonics’ sound quality compares well with wired mics,” he reports. “In fact, 99% of what we recorded was through Lectrosonics Digital Hybrid Wireless® technology. Further, the cold weather didn’t affect the sound quality or range of the equipment at all. The transmitters and receivers all worked flawlessly. The SMa's operated for about 4 hours with 2500 mAh rechargeable AA batteries and the 500 series transmitters ran for roughly 7 hours with iPower lithium rechargeable batteries. Even in this extreme cold, battery performance was almost the same as in normal conditions.”

Before turning his attention back to his current project, Klaavo offered some final thoughts on his Lectrosonics wireless equipment. “In addition to having good experiences with Lectrosonics gear in Finnish winter temperatures, the incredibly compact size of these transmitters is another important consideration for this type of work,” said Klaavo. “The wardrobe people love the SMa’s because they’re so small. They can be hidden very easily among the costumes. Equally important, Lectrosonics’ equipment is built very well. Only once in six years have I sent a transmitter back to the factory for repairs. I really believe that the people at Lectrosonics stand behind their products and care about their customers. The pace of the production on Lapland Odyssey was fast on most days, and we were able to keep up with it, thanks to the reliability and ease of use of our Lectrosonics equipment.”