Lectrosonics Holds Its Own With The Predators 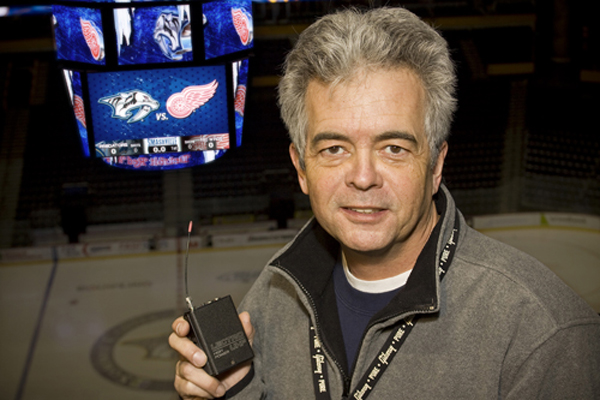 Nashville, TN – January 2010… For sports reporter Mark Howard, chasing down interviews is a way of life during the Nashville Predator hockey games. Whether he’s conducting an interview at the bench or from a remote corner of Sommet Center—the Predators’ home arena—the audio is consistently clear and trouble-free, thanks to the rock solid performance of Lectrosonics wireless equipment.

Bob Hailey is a Nashville-based freelance audio engineer who regularly handles A2 audio (building and testing of all audio systems outside the broadcast truck), intercom management, RF coordination, and similar audio tasks for the Predators. Using a Lectrosonics UM400a beltpack transmitter with a UCR401 receiver for the wireless microphone setup, along with Lectrosonics’ IFBT4 IFB (Interruptible Fold Back) base-station transmitter in conjunction with an R1a synthesized UHF beltpack IFB receiver, Hailey knows that Mark Howard’s wireless setup will perform exactly as expected during every critical moment of the game.

“The Lectrosonics wireless equipment delivers the performance we need for sports reporting,” says Hailey, “and the range of the equipment is first-rate. With seating for approximately 17,000 people, Sommet Center is a large venue and the quality and consistency of the wireless coverage throughout the facility has been really impressive. We position the receivers in the broadcast booth, which is located all the way up near the top of the arena along the back wall at center ice. The reporter roams the entire arena and the equipment’s performance is everything you could ask for. Audio quality is excellent and drop-outs are nonexistent.”

Hailey reports that Howard is outfitted with both a Lectrosonics UM400a beltpack transmitter (for his wireless microphone) as well as an R1a synthesized UHF beltpack IFB receiver. Hailey explained, “This arrangement enables Mark to roam freely throughout the arena, conducting his interviews, while the IFB system serves as his foldback monitor in addition to facilitating communication with the program director. I also use an R1a so that I can keep track of events during the games.”

With Sommet Center located in the heart of downtown Nashville adjacent to the convention center and the symphony hall, frequency coordination is another extremely important aspect of using the wireless equipment. “Being in the middle of Music City,” notes Hailey, “it’s not uncommon for several high profile events to be taking place on the same evening. As an example, during the recent CMA (Country Music Association) Awards, I conducted a scan and registered roughly 1,000 frequencies, so finding open frequencies is critically important. With the Lectrosonics equipment, a single button push on the receiver enables me to identify what’s available. Another push and it’s locked in. That makes RF coordination quick and painless.”

In addition to Lectrosonics’ well known performance characteristics, Hailey is equally enamored with the build quality of the equipment. “I love the fact that the Lectrosonics gear is manufactured with metal as opposed to plastic,” he said. “It handles the abuse that one commonly encounters in the field far better than many competing products. Simply put, it’s built like a tank and delivers trouble free operation.”

As he turned his attention back to his current projects, Hailey summed up his Lectrosonics experience. “Lectrosonics delivers in all the critical areas—audio quality, ease of use, and drop-out free performance,” Hailey said. “The equipment always works and this provides a high degree of confidence—no matter how demanding the conditions may be. I wouldn’t use anything else.”

For additional information about Bob Hailey, contact him at This email address is being protected from spambots. You need JavaScript enabled to view it..