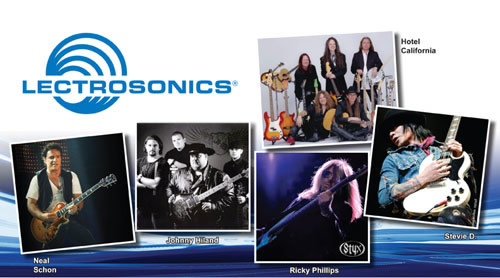 Albuquerque, NM – December 2009 - Lectrosonics, recognized the world over as a leading manufacturer of wireless microphone systems and audio processing products, is pleased to announce the appearances of instrumentalists Ricky Phillips of Styx, Stevie D. of Buckcherry, Neal Schon of Journey, and Johnny Hiland at the Lectrosonics booth (#6698, Hall A) during Winter NAMM, held January 14 – 17 at the Anaheim Convention Center in Anaheim, CA. For guitarists and bass players interested in “cabled” sound quality combined with the ease of movement and freedom from “dropouts”, the Lectrosonics IS400 Digital Hybrid Wireless® instrument system merits a close look.

The IS400, designed for use with both electric and acoustic instruments in demanding live performance environments, uses Digital Hybrid Wireless technology developed by Lectrosonics. The result is that the IS400 system offers a matchless balance of digital audio quality and the immense operational range of the finest FM wireless systems. Further, the IS400's means of operation eliminates the need for an analog compandor circuit in the audio path along with the normally corresponding signal artifacts, and provides superior audio dynamic and frequency response when compared to analog-only systems. The IS400's 50mW LMA transmitter and R400 diversity receiver are both housed within rugged, all-metal casings for long-lasting use in the most demanding performance environments.

These four acclaimed artists all use the Lectrosonics IS400 wireless system and have nothing but praise for its performance, as is evidenced by the following quotes. “The Lectrosonics’ frequency response is great and the gear doesn’t color Stevie’s sound the way other wireless systems with compandors do,” says Dean Mitchell, guitar tech for Stevie D. “In the world of wireless equipment, a tech like myself lives and dies by the performance of the wireless setup, and in the world of wireless gear, Lectrosonics nails it.”

Adam Day, who since 1981 has served as guitar technician to a number of leading guitarists including Ted Nugent, Dokken, and, for more than 20 years, Slash, is now holding the fort with Neal Schon of Journey. “When I started with Neal,” notes Day, “I suggested he give the Lectrosonics equipment a try. Neal took the system home, played with it for a while, and came back with a thumbs up. Since that time, we’ve been using the Lectrosonics MI39A active guitar cable, LMA Digital Hybrid Wireless beltpack transmitters, and the R400A receivers. We have two systems with Neal’s A touring rig and another two with his B rig.”

Karl Winkler, Lectrosonics' Director of Business Development discussed the benefits the IS400 Digital Hybrid Wireless instrument system offers today’s performing guitarist, "Companded audio normally associated with analog wireless systems has been a well-documented problem for performing musicians, particularly acoustic guitarists and bassists,” said Winkler. “Musicians have longed for a system that would compete with a standard cable for sound quality, but allow the freedom of movement provided by a wireless system. Our Digital Hybrid system provides the best of those two worlds with range to spare."