This material courtesy of Gotham Sound and Communications, Inc. 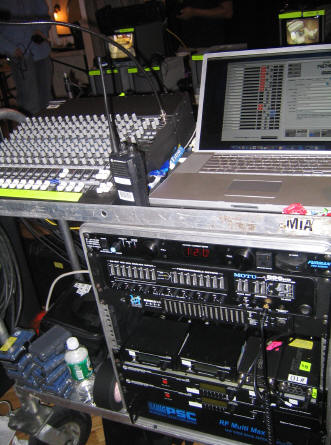 The Requirements: Five Panasonic DVX-100 cameras will cover all the action across the three areas.  All talents must be able to be recorded all of the time no matter where they are.

The first thought was to go with a more typical reality television setup:  One person with a five channel mixer and a bunch of wireless receivers in each of the three areas sending a mix to camera.  Using the Lectrosonics 211’s the mixer can select which participant he or she receives using the LCD screen.

We scrapped this idea for several reasons: First, the set had too many people on it already.  Second, mixing a minimum of four microphones and shuttling between frequencies increased the chance that something would be missed in the change, plus  the difficulty of mixing a minimum of four channels on the fly.  Instead we decided to record each microphone to a separate track from a central location.  This presented several issues, including how to give at least thirteen wireless receivers enough range to span across two separate rooms totaling an area of 7,500 square feet, and record them for an indefinite period of time.

The new Lectrosonics Venue system presented the most ideal solution given the number of wireless we were going to need.  Having a maximum of six receivers in one rack space and the ability to loop the antenna signals gave us maximum flexibility while keeping everything neat and simple. To ensure that there would not be any range issues, we ran two antennas to each room and coupled them together with PSC’s RF MultiMax before running them into the Venue receiver array.

The RF Multimax is a passive RF coupler/active spliter. It is effective at combining antenna signals and then splitting the (combined) signal out to receivers, with a minimum amount of crosstalk and fuss. Remember, any contestant could go anywhere in the loft. We could have just flew the antennae high in the air and crossed our fingers, but we knew that once it got going we would be locked into our arrangement. We couldn't run the receivers to "set", because they were guaranteed to be in the wrong place 50% of the time. Instead, we ran 2 antennas (Lectro SNA600) to each of the 2 main "areas", and a 5th antenna to the hallway between the 2 areas. This way, no contestant was ever farther than 20 feet from an antenna, no matter where in the loft they roamed. We used low loss RG-8x between the antenna and the MultiMax, and combined the antennas within the MultiMax so that each half of the receiver's diversity RF input "saw" only one antenna from each area in the loft (the hallway antenna was routed to the diversity RF "A" antenna input).

Here is the frequency breakdown that we used: 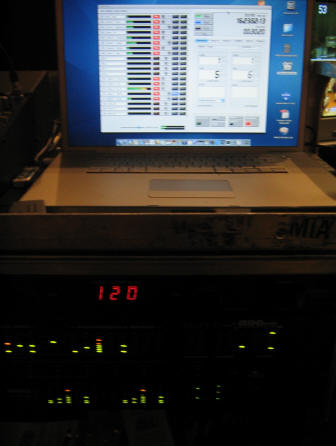 The wireless problem solved, one question remained: Which recorder should we use?  The industry standard for multi-track recording has been the Tascam DA-98.  For this situation we would have needed to use at least two ganged together for a maximum of 16 tracks.  There are several problems with this idea.  The first is that DTRS tapes are a maximum of 113 minutes long and there was a distinct possibility of needing to record for up to four hours straight.  Finally, the DA-98 is based in a linear world where importing into the editing system would be in real time and require a DA-98 in post.

We decided that a non-linear recording solution would be needed if we were to deliver that many tracks to post. The first recorder we considered was the Fostex PD-6.  Unfortunately the media used for the PD-6 lasts only 35 minutes before needing to change sides, and is limited to six tracks, thus leaving us with the same problems as the DA-98s.  We then looked at the Aaton Cantar, the Zaxcom Deva V and the Sound Devices 744T.  Both could accommodate the recording time we wanted but neither had the number of tracks necessary for this project.

Enter MetaCorder. With up to 20 tracks and nearly limitless recording, MetaCorder was the ideal solution to all of our recording problems.  It allowed us to record each mic individually as a Broadcast Wave file, giving post maximum flexibility and quick import into their Avid Media Composer.  It also enabled us to expand the track count for any unexpected additions that the production might have, which of course it did: The original eight contestants quickly expanded to twelve which were easily accommodated through some quick patching. Time-code was generated  by a Denecke GR-1 and sent to the line input of the Mac Powerbook, which MetaCorder read and stamped in the Broadcast Wave header of each file it recorded. In addition, Denecke slates were jammed and the cameras videotaped the slate at the head of each take.

One issue with the Mac OS X Core Audio drivers is that they can not yet support two audio devices at once.  To date there is no A-D converter with more than ten analogue inputs that connects to a computer via FireWire.  To solve this problem we decided to use a Metric Halo Mobile I/O as an A to D converter over ADAT.  We then took the eight analogue inputs of the Mobile I/O into the ADAT port of the MOTU 896 “Mark of the Unicorn.”  Combined with the eight analogue inputs in the MOTU, we were able to pump a maximum of sixteen tracks of analogue audio into MetaCorder.

Since we wanted to be able to walk away at the end of the show and give Production a deliverable with all of the audio on it, we decided to mirror to both the internal hard drive of our Mac laptop and to an external LaCie FireWire hard drive.  We gave Production the Lacie drive (they bought it), and we had a backup copy on the laptop, just in case. For additional backup, we also made two "mixers" - one for each room - which were sent wirelessly to the main "A" and "B" camera, and served as our IFB feeds as well.

Power backup was provided by Galaxy Audio's Far Outlet, a combination 33Ah Sealed Lead Acid rechargeable battery, battery charger, and sine-wave inverter. It basically acted as a "clean" UPS system, and allowed us (and our electronics) to withstand the vagaries of AC power on a set.

When all was said and done we recorded thirteen tracks for over two and a half hours straight.  Using MetaCorder together with the Lectrosonics Venue system, we transformed the production from a difficult day of over the shoulder mixing mayhem to a relaxed and meticulous recording session, while  giving post production maximum flexibility and yielding the best sound possible.

Two weeks after production, the directors and editor continue to rave about the quality of the sound, and the ease that they were able to imp 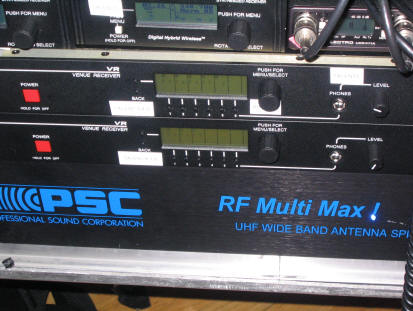 ort and manipulate the production audio. As a bonus, the DP requested this system be used for his next project.

One interesting side note: There was a lot of discussion about whether to record TC on one of the audio tracks of the 100a camera. We resolved that it would have been useful for the editor, and that on our next project, we would transmit TC and record it on the right channel. When we began discussions with the editor of the next show (thanks to the DP), she said that TC would not be useful on the audio track of the DV camera, and preferred slates.

Also, this set-up would be a natural to use with Mackie's new Onyx mixer with Firewire interface. The FW interface provides 16 pre-fade, pre eq outputs, plus the main mix outs, plus a 2 track DAW (MetaCorder) return all on one FW cable! We look forward to getting our hands on them, but right now they are scarce.