Lectrosonics 'In Deep' During Preview Of Ollin Burial 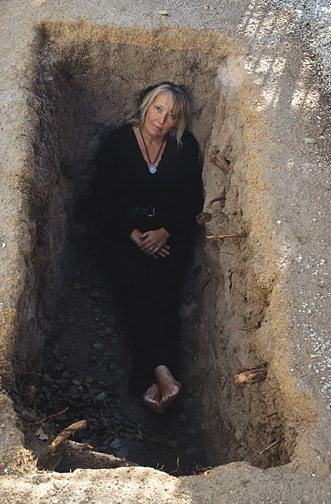 Albuquerque, NM – November 2009… Land-based artworks are usually installed on the land, but rarely in it. Such was the case, however, on October 3rd, when Yei Ehekatl, a Baltic/Nahuatl tribal artist who makes environmental art using digital photography, video, living grasses, and charred wood was buried 4 feet into the ground as part of a project that explores the physical, spiritual, and cultural meanings of burial. For almost two hours, the amplified sounds of the artist’s heartbeat and breathing were heard in real time throughout the gallery where the performance occurred—thanks to wireless technology from Lectrosonics.

Part of the artist’s ongoing project, Ollin Burial, the performance occurred at THE LAND/gallery, which in conjunction with THE LAND/an art site in nearby Mountainair, NM, are devoted exclusively to site-specific, environmentally low-impact, land-based art. Yei Ehekatl, who is also known as Edite Cates and is one of the founders of THE LAND/an art site, discussed the challenges of the project.

“In a two-acre meadow at THE LAND/an art site,” explained Cates, “I have begun digging a series of ‘graves.’ These are oriented according to ancient Aztec practices involving the earth’s directional energies. Although this work addresses ideas about death and the return of the body to the soil, it is equally about the living experience of being in the ground—a heart beating inside the earth. We hosted the performance outside the entrance of THE LAND/gallery, which serves as the outdoor site’s urban annex and a venue for exhibiting environmental art created specifically for an indoor space.”

“The grave was covered with a thin wooden panel and decorated with freshly cut evergreen branches,” Cates continued. “The sound component was an important element in this installation. It added the artist’s presence without being seen—engaging the audiences’ imagination and helping connect the gallery installation with the bigger, long term installation at the site in Mountainair. I was looking for a means of capturing the heart and breathing sounds, and through an audio rental house in Arizona that I’ve worked with; I learned of nearby Lectrosonics and contacted them.”

Upon receiving Cates’ call, Karl Winkler, Lectrosonics’ Director of Business Development, decided to get personally involved. “My curiosity was more than a little piqued,” recalls Winkler. “While we routinely assume an active role in theatrical performances, this was new and exciting and I couldn’t resist the opportunity to participate.”

Ultimately, the Lectrosonics wireless setup included two SMQV belt pack transmitters and an M152 lavaliere microphone (taped to artist's chest for the heart sound) along with an HM172 earset mic to capture the breathing sounds. These two channels were fed into a Lectrosonics Venue VRM receiver system stocked with two VRS Venue receiver modules located in the gallery. The sound was then reproduced through an active speaker and subwoofer system. The wireless part of the setup utilized Lectrosonics legendary Digital Hybrid Wireless® technology, which uses a proprietary algorithm to encode 24-bit digital audio information with no compression and low distortion into an analog format that can be transmitted in a robust manner over an analog FM wireless link. Alan Fulford of Albuquerque, NM-based Field & Frame ran sound for the performance.

Cates reflected on the performance. “It couldn’t have gone better!” Cates said. “We had roughly forty guests and they were all very impressed. As part of the longer-term project, I plan on inviting visitors to the outdoor site to lie in each of what will eventually be twenty graves, and, as with my gallery performance, I hope to record each participant’s breathing and heartbeat. Afterwards, I will also record their reactions to the experience. These audio files will be edited and used to create accompanying video realizations for a subsequent indoor installation. The Lectrosonics equipment had a huge impact on this performance and Karl was fabulous to work with. He made the entire gallery piece possible and this has opened up more creative options for the Ollin Burial project. Now I know—first hand—why Lectrosonics is so popular with performers.”