Lectrosonics Ushers The Classics Into The 21st Century 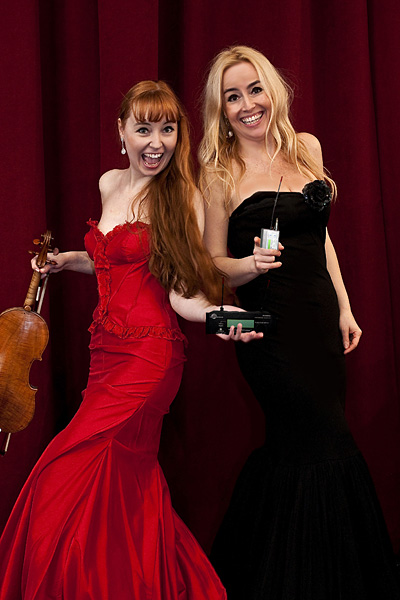 New York, NY – August 2009… When the venue is New York’s legendary Carnegie Hall, one needn’t be concerned about acoustics. However, if the performance is destined to take place in a convention center or an open air theater, the challenge of a single violin being heard takes on an entirely new sense of urgency. Such is the case for concert violinist Anna Karkowska and her pianist sister Kasha. So when issues of less-than-ideal acoustics require Anna to tap into sound reinforcement systems, Ms. Karkowska turns to wireless technology from Lectrosonics.

The Karkowska Sisters are an internationally acclaimed, award winning violin/piano duo that has performed to standing ovations and great reviews throughout North America and Europe at many prestigious concert venues including Carnegie Hall & Lincoln Center in New York City, Miami, Florida’s Gusman Center for the Performing Arts, and the National Grand Theater in Warsaw, Poland. Additionally, they have been invited to record for American and Polish TV and Radio as well as PBS.

“We live in an age of noise,” says Karkowska, “and many times beauty simply drowns in our high volume world. As artists, it’s our duty to save beauty and expose it in the best possible light. In addition to concert halls, we perform at a wide variety of venues such as open air auditoriums or convention facilities where the acoustics are less than perfect and this frequently requires the support of a sound reinforcement system. Our goal is to deliver classical music in a 21st century package. Our programs of virtuosity and laughter are designed in such a way that people from all walks of life can relate. With the Lectrosonics system, they can enjoy our concerts in their own neighborhood.”

Karkowska’s search for the best wireless solution led her to Lectrosonics. ““I researched the web for the lightest transmitter in the market and that’s how I found Lectrosonics and Mr. Karl Winkler,” says Karkowska. “I very quickly discovered that Karl, too, is a violinist who completely understood my concerns. Karl always found time to answer my questions and has showed me incredible kindness, understanding, patience, and support. Mr. Howard Kaufman (the New York area representative) also helped me with some troubleshooting. With such fantastic people, Lectrosonics should be an obvious choice to everyone!”

Armed with a solid set of product recommendations and assurances that she’d get all her questions answered if she needed technical assistance, Karkowska proceeded to purchase a Lectrosonics SMa Super-Miniature Digital Hybrid Wireless® beltpack transmitter and an R400A Digital Hybrid Wireless diversity receiver for use with a DPA 4061 instrument microphone. “This is the perfect solution for me,” says Karkowska. “The system is extremely compact and easy to use. The sound quality is very natural and the only difference in my sound is that the violin sounds much more powerful.”

“Performing a non-stop concert for over two hours filled with virtuoso music that someone once described as a feast for the ear paired with the thrill of acrobatics and Formula I racing is both mentally and physically challenging” continued Karkowska, “Since I always memorize the entire programs, I’m careful to avoid any unnecessary distractions. The Lectrosonics system is so compact; it provides the freedom of movement that is absolutely essential when performing. I’m able to move freely without having to worry about the quality of my instrument’s sound or visual aesthetics. I would make Paganini jealous with the power of the double harmonics. With Lectrosonics, it’s possible to deliver every single note to the last row—even in venues with the worst possible acoustics. It feels great. ”

Karkowska reports that, not only has her Lectrosonics wireless system been a tremendous help by enabling her to be heard in venues where a single violin would otherwise have been overwhelmed, the system enables her and her sister to reach out to more people and expose them to classical music. “With this equipment,” says Karkowska, “we have the tools to reach any audience, no matter what the acoustic character of the venue may be.”