Aerosmith On Tour With Lectrosonics 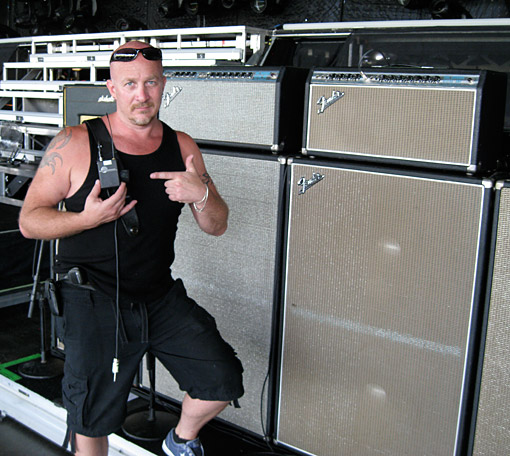 Rio Rancho, NM – July 2009… Aerosmith, also known as the Bad Boys from Boston, are on the road again. Recognized as the best-selling American hard rock band of all time, this legendary ensemble just recently launched an extensive tour that runs through mid September and includes performances in LA, Chicago, Las Vegas, New York, and many other major cities across America. In order to ensure freedom of mobility while on stage—without sacrificing sound quality— both lead guitarist Joe Perry and rhythm guitarist Brad Whitford are performing with a newly acquired arsenal of six Lectrosonics IS400 Wireless Beltpack Instrument Systems.

Jim Survis, Guitar Tech for Joe Perry and Crew Chief for Aerosmith, was in the market for new wireless equipment for the tour. Jim, who has worked with Joe Perry for the past 17 years, handling all the technical logistics for Perry’s recordings, videos, live performances, and all aspects of his guitar rigs, discussed his decision to embrace Lectrosonics.

“We were very concerned about changes in the FCC regulations,” explained Survis, “and this prompted us to get equipment we knew would be fully operative with the frequency changes that have been allotted for this type of wireless application. It was very important to us that our RF gear be fully compliant with the new regulations. In the process of looking around and investigating, I went to see AC/DC and spoke with Malcolm Young’s guitar tech, Geoff ‘Bison’ Banks, who highly recommended Lectrosonics gear. I was equally concerned that, whatever gear we selected, it had to deliver excellent sound quality. During my conversations with Geoff and others, I heard nothing but good stuff about Lectrosonics.”

Acquired in early June and placed into service on the first tour date at mid month, Perry is now outfitted with four Lectrosonics IS400 Wireless Beltpack systems—enabling him to easily change guitars during performances—while Whitford is equipped with two. Each IS400 wireless setup includes the R400A receiver and an LMa Digital Hybrid UHF beltpack transmitter. Completing the system package is the Lectrosonics MI39A instrument cable that connects the guitar’s output to the transmitter.

The systems on tour with Aerosmith employ Lectrosonics’ highly acclaimed Digital Hybrid Wireless® technology, which uses a proprietary algorithm to encode 24-bit digital audio information with no compression and low distortion into an analog format that can be transmitted in a robust manner over an analog FM wireless link. The result is much higher dynamic range—free from sonic artifacts— than wireless systems using a compandor are able to offer. Digital Hybrid Wireless technology delivers long operating range, graceful signal decay, and a small spectral footprint, facilitating more channels to be operated simultaneously.

Survis is very enthusiastic about several aspects of the IS400 wireless systems. “Since we’re constantly travelling,” said Survis, “it was important that our wireless gear make it easy to identify available frequencies in each new location. The Lectrosonics equipment certainly meets that requirement and it’s just as simple to make the required changes. With the touch of a single button, the system scans for available frequencies and when it finds one, another press locks it in and you’re good to go.”

“I’ve also been really impressed with the range these systems provide,” continued Survis. “I’m not using any booster antennas and I’ve never experienced a dropout. Also, the IS400 has a function that enables us to hot swap equipment, and this has proven invaluable.” Survis is referring to Lectrosonics’ Smart Squelch™ feature, which eliminates those horrible “pops” that can easily occur through loudspeaker systems when turning transmitters on and off.

Before directing his attention back to the many issues that await him on the next tour stop, Survis summarized his experience with Lectrosonics, “Everything’s been working really well and everyone involved is very pleased with the equipment’s sound quality, range, and ease of use. On several occasions, Joe has mentioned how pleased he is with his sound this tour and Lectrosonics is a big contributor to that. That says a lot.”

For additional information about Aerosmith, including the band’s upcoming tour dates, visit them online at www.aerosmith.com.