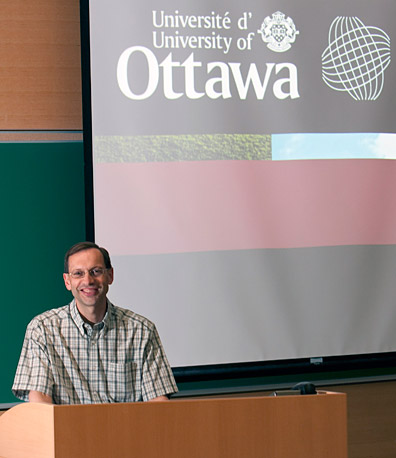 Ottawa, Ontario, Canada… As one of the oldest universities in Canada with a student population of more than 35,000 from 150+ countries, the University of Ottawa is a bilingual, research-intensive, non-denominational institution where students study in their choice of English or French with the option of pursuing French immersion undergraduate programs. With 38 buildings, 625 research laboratories, and 278 teaching laboratories spread over three campuses that total 105 acres, the University has numerous lecture halls and presentation spaces to support its large and diverse student population. Sound reinforcement is critical in many of these spaces and to ensure the best possible performance, the University has deployed an extensive assortment of Lectrosonics equipment, including over 100 channels of wireless microphones and multiple digital audio processors throughout the campus.

One of the most notable facilities on the University of Ottawa’s campus is the Desmarais Building (DMS). Completed in the fall of 2007, this impressive structure with more than 248,000 square feet, including twelve floors of classrooms and offices, is the home to the University’s Telfer School of Management as well as the Faculty of Social Sciences. The complex houses several Lectrosonics-equipped presentation spaces, including room DMS1110, an 89-seat lecture/presentation hall so popular on campus that scheduling for the facility is centrally-allocated and controlled by the Registrar’s Office, as well as the VIP multipurpose room.

Room DMS1110 is equipped with a Lectrosonics R400 UHF diversity receiver and an LMa UHF beltpack transmitter used in tandem with a Lectrosonics M152/5P lavaliere microphone. Audio mixing and processing tasks are handled by two Lectrosonics DM84 digital matrix processors that are daisy-chained together and integrated with a DMTH4 digital telephone hybrid to manage a variety of external audio sources. An AMX® control system provides users with convenient access to the room’s many multimedia capabilities, including the DM Series processors.

Mark Gareau, Manager of the University’s Multimedia Distribution Service (MDS), which is part of the University’s Teaching and Learning Support Service, oversees a myriad of responsibilities involving the multimedia equipment deployed campus wide. Managing a staff of 16 people, Gareau designs the University’s teaching spaces and also specifies and installs the equipment selected for the various locations. He commented on his choice of Lectrosonics equipment.

“The Desmarais Building is in close proximity to the Department of National Defense,” explained Gareau, “which is responsible for the Canadian Forces. As a result, this is a heavily congested RF area and numerous other manufacturers of wireless microphone equipment have not fared well here. We quickly realized that to provide efficient and effective service, we needed a product that would be more stable, reject outside interference, and be robust enough to last at least four years. With our Lectrosonics gear, we can easily identify available frequencies and lock them down. Further, the metal housings of the Lectrosonics equipment are far more robust than the plastic enclosures found on competing products.”

Gareau was equally complimentary of Lectrosonics’ DM Series audio processing equipment. “The DM Series equipment used in DMS1110 is a terrific choice for that room,” notes Gareau. “This space is used primarily as a classroom but due to its aesthetically pleasing look and first-rate multimedia capabilities, it is also used for VIP conferences and special events. Here, the DM84’s provide the best of both worlds in terms of usability. When technical intervention is required (most of the time, the AMX system provides simplified control of all functions), the technician or student can use one DM84 as a manual mixer for microphone settings while the other is automated for all other sources. Auto-mixing enables us to increase gain before feedback and increase intelligibility. The DM84’s simple design ensures reliability and efficiency.”

Because of its rugged build quality, stellar performance in crowded RF environments, and trouble-free nature, Gareau has deployed a wide assortment of Lectrosonics equipment throughout the entire University of Ottawa campus. “We currently have 116 Lectrosonics LMa transmitters and R400 receivers, 44 DM84 processors, and 25 DMTH4 hybrids,” notes Gareau, “and we’re adding more Lectrosonics equipment all the time. Our VIP room at Desmarais was the first to deploy Lectrosonics’ Venue system and the sound quality has been a crowning jewel in this beautiful and important space. Due to the success we’ve experienced, the University is creating two more rooms similar to this one and Venues will be introduced to both of them.”

“As a policy and procedure mandated by the University,” Gareau continued, “MDS is responsible for assigning frequencies to wireless microphones on campus. We have standardized on Lectrosonics since the early 1990’s. Lectrosonics customer and technical support services have been first rate, and this is yet another key factor that influences equipment procurement decisions. As we move forward, Lectrosonics will most assuredly be an integral part of this University’s growth.”

For additional information about the University of Ottawa, visit www.uottawa.ca.