Buckcherry Rocks Out With Lectrosonics 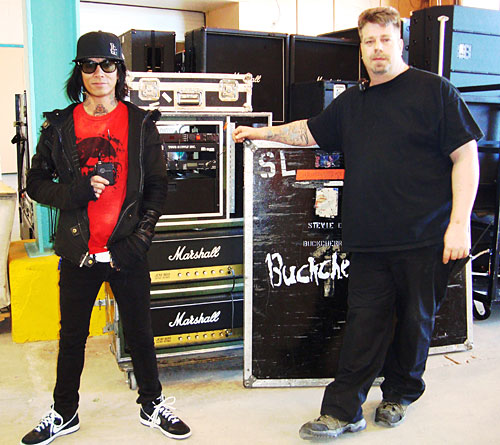 Rio Rancho, NM – May 2009… Buckcherry, the Los Angeles, California-based hard rock band that achieved critical acclaim with the 2006 RIAA platinum, Grammy-nominated album 15, is back with a vengeance and touring once again in support of their latest album Black Butterfly. Consisting of Josh Todd (vocals), Xavier Muriel (drums), Jimmy Ashhurst (bass), Keith Nelson (guitar), and Stevie D. (guitar), Buckcherry is in the midst of an extensive tour that has them travelling both domestically as well in Europe. No matter where the tour takes them, guitarist Stevie D. and his guitar technician Dean Mitchell rely on a wireless setup to deliver Stevie’s signature guitar sound while providing the mobility to roam freely about the stage—and for this, they count on Lectrosonics.

Dean Mitchell, who over the years has served as guitar tech for a wide range of artists, including Cheap Trick, FireHouse, Night Ranger, The Doobie Brothers, and Ted Nugent to name just a few, is currently tasked with ensuring that Buckcherry guitarist Stevie D’s sound never drops a note. This involves everything from maintaining all of his guitars to wiring his guitar rack and making certain that his Lectrosonics wireless systems are spot on the money. So for mission critical performances, Stevie D. goes onstage with not one, but two Lectrosonics IS400 Wireless Beltpack Instrument Systems featuring Lectrosonics’ Digital Hybrid Wireless® technology.

Stevie D’s wireless setup consists of the two Lectrosonics IS400 receivers mounted into a single 19-inch rackspace, two Lectrosonics LMa beltpack transmitters, and multiple Lectrosonics MI39ARA cables specially equipped with Neutrik® right angle NP2RX-AU-Silent plugs. “Stevie switches guitars numerous times throughout the course of a performance,” notes Mitchell, “so by having him setup with two systems, I can alternate between them seamlessly. It makes for an absolutely trouble-free approach to wireless guitar.”

Mitchell reports that Stevie D. is no newcomer to Lectrosonics wireless gear. “Stevie’s been using Lectrosonics for over two years and the system really complements his style of playing. He’s got it—he’s a pure rock and blues player and he’ll be around for a long time,” notes Mitchell. “When I joined the tour, I was really impressed with Lectrosonics’ sound quality, the rock solid coverage and reliability, as well as the rugged build quality of the products and because of this; I wanted to get a second system so I could run them both at the same time. In the world of wireless equipment, a tech like myself lives and dies by the performance of the wireless setup, and in the world of wireless gear, Lectrosonics nails it.”

When asked about those characteristics of the Lectrosonics system that he finds most useful in his particular line of work, Mitchell was quick to point to the IS400’s sound quality and its ability to easily and quickly identify open frequencies. “The IS400’s sound quality is really musical,” says Mitchell. “The Lectrosonics’ frequency response is great and the gear doesn’t color Stevie’s sound the way other wireless systems with compandors do. I’ve also been very impressed with the ease of identifying and locking down open frequencies. The system gives you a warning when you’re in range of other interfering radio frequencies, so at the touch of a single button, the system scans for available frequencies and when it finds it, another press locks it in and you’re done.”

For any touring act, reliability is yet another key consideration when selecting products, and in that regard, Mitchell finds Lectrosonics on top of its game. “To be honest,” says Mitchell, “I really haven’t had any issues with our Lectrosonics equipment, so I rarely have reason to call the company. I called recently when we were in nearby Santa Fe because I wanted to tell them how much we like the IS400 and invite them to come to the show. Karl Winkler got back to me right away and visited with us.”

As they prepare to depart for Europe, where the band will spend the month of June performing in Nurnberg, Germany, Copenhagen, Denmark, Rotterdam, Netherlands, London, England, and Clisson, France as well as other cities, both Stevie D. and Dean Mitchell know they can depend on their Lectrosonics gear to get the job done. Stevie D. said it best, “I love this wireless setup and my tech. Just try to pry them from my hands! They both make my life on the road great.”

For additional information about Buckcherry, visit the band online at www.buckcherry.com. Dean Mitchell is also the owner of Mitchell Custom Case—the Leader in Guitar Vaults. Contact the company at (920) 430-1211.