American Conservatory Theater Finds Much To Like With Lectrosonics

Clean, natural sound quality a huge plus for performers and tech staff alike 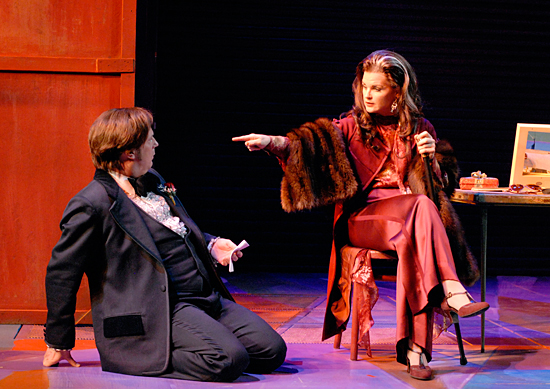 San Francisco, CA - April 2009… For any theatrical presentation, the ability of the audience to clearly hear and understand the performers is of paramount importance. Without a high level of speech intelligibility, even the finest performance gets lost. Similarly, freedom of mobility is critical and the ability to hide both the microphone and the wireless bodypack transmitter among the costumes further compounds the challenges for the technicians charged with outfitting the cast. To ensure optimum audio quality while keeping the technology in a “supporting” role, the American Conservatory Theater (A.C.T.) recently invested in new wireless technology from Lectrosonics.

As one of the largest regional theaters in the country, the American Conservatory Theater nurtures the art of live theater through dynamic productions, intensive actor training in its conservatory, and an ongoing dialogue with its community. Under the leadership of Artistic Director Carey Perloff and Executive Director Heather Kitchen, A.C.T is nationally recognized for its groundbreaking productions of classical works and bold explorations of contemporary playwriting.

Jeremy J. Lee, a New York- based freelance sound designer who frequently specifies sound system designs for the theatrical community everywhere from the regional theaters to both on and off Broadway, was called in to oversee the audio aspects of the American Conservatory Theater’s January 2009 presentation of John Guare’s Rich and Famous that was directed by John Rando. Since Lee generally uses the existing house sound system and configures it as required for the production, he was delighted to discover that A.C.T. had just taken delivery of a new Lectrosonics system, which consists of a Venue Series receiver fully stocked with six VRS receiver modules and six SMDa Super-Miniature UHF beltpack transmitters. The entire 6-channel system employs Lectrosonics’ highly acclaimed Digital Hybrid Wireless Technology®.

“We wanted the actors to sound fantastic,” said Lee, and with the new Lectrosonics equipment, this was readily accomplished. The Venue/ SMDa system, along with the DPA 4061 mics that we used, are the best I've heard in a wireless system. The frequency and dynamic response are phenomenal, and we had zero RF problems, no dropouts, and no ‘fizzie’ intermod noises. The entire cast sounded warm and completely natural. With this show, we wanted to make the transition between the scenes, which were unamplified, and the songs, which were amplified, completely seamless. The Lectrosonics gear sounded so natural that this was relatively easy.”

Lee was particularly impressed with the fact that he didn’t have to spend considerable time “crafting” the sound of the system and was equally appreciative of the IAS software by Professional Wireless Systems for frequency coordination and system monitoring. “I didn't have to get surgical on the high end EQ of the system to try and restore articulation,” states Lee, “as is common with other RF systems that cost a lot more. Likewise, the IAS software makes setup and system monitoring as effortless as one could possibly hope for. The next time I have a chance to spec an RF system; my first choice is going to be Lectrosonics’ Digital Hybrid Wireless.”

With the American Conservatory Theater’s presentation of Rich and Famous now a part of history, Lee reflected on his experience using the Lectrosonics system. “Simply put, it worked fantastically for our show,” Lee said, “and I know that the sound department is very happy with the equipment’s reliability and robust construction. From now on, I will rejoice when I see Lectrosonics on a company's inventory list. Lectrosonics’ performance is stunning, transparent, and reliable.”

To learn more about the American Conservatory Theater, visit them online at www.act-sf.org. For additional information about Jeremy Lee, contact him at www.jjlee.com.