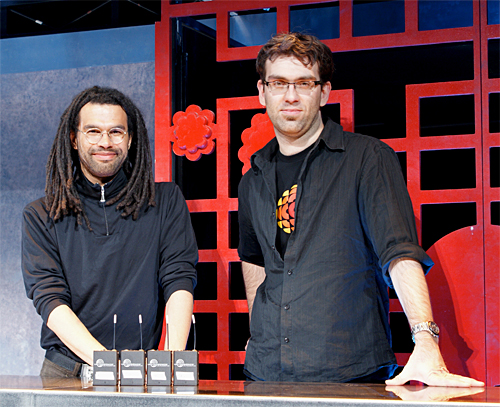 Québec City, QC, Canada - April 2009… When Robert Lepage, Ex Machina’s founder and artistic director, asked his collaborators to help find a name for his new company, he had one condition: the word theatre could not be part of the name. Recognized as one of today’s foremost stage directors and a leading figure in the Canadian avant garde, Lepage leads a multi-disciplinary company that unites actors, writers, set designers, technicians, opera singers, puppeteers, computer graphic designers, video artists, film producers, contortionists, and musicians to transport theatre to an entirely new level that uniquely blends a variety of artistic disciplines. This is a company that values technology for its ability to contribute to the greater artistic good and, for this very reason, Lectrosonics’ has become an integral part of the company’s performances.

Jean-Sébastien Côté, sound designer and musician for Ex Machina, has been involved with the company since 1999 in a multi-faceted capacity that involves everything from organizing a show’s audio logistics to composing and recording music for their performances. Ex Machina currently have Lectrosonics wireless systems in use on two theatrical presentations: The Blue Dragon and Eonnagata.

The Blue Dragon is set in China and tells the story of Pierre, an art dealer now living in Shanghai, who is visited by an old friend, Claire, an ad exec from Montreal. Eonnagata is a dance / theatre project based on the story of Chevalier d’Éon, a French diplomat, spy, soldier, and Freemason who lived the first half of his life as a man and the second half as a woman. The Blue Dragon will run at Montreal’s Théâtre du Nouveau Monde during April and May 2009, followed by Berkeley, CA and then performances in Europe while Eonnagata will tour Montreal and Quebec, Canada as well as London, England and Lyons, France during summer 2009.

On each show, Côté specified Lectrosonics’ Venue Series Wideband receivers using VRS receiver modules—four channels for The Blue Dragon and five channels for Eonnagata. For The Blue Dragon, the four actors are outfitted with Lectrosonics LMa Digital Hybrid Wireless® UHF beltpack transmitters plus one unit for backup, while on Eonnagata, the cast is using three SMa Super Miniature UHF beltpack transmitters (one for each actor / dancer) and two LMa’s, one as a backup and one to transmit trigger pulses from a table that is used as a drum. All equipment employs Lectrosonics’ highly acclaimed Digital Hybrid Wireless technology.

When queried about those characteristics of the Lectrosonics equipment that he finds most appealing for use in theatrical applications, Côté offered the following, “The Lectrosonics sound quality is very high and we haven’t had any transmission issues, which is always a big ‘thumbs up’. I also like the ability to tweak the Venue receivers— compared to the ‘meat and potato’ channel / frequency / squelch settings of other receivers. Similarly, the system’s ability to scan frequencies without any computer connected to it is a great feature.” 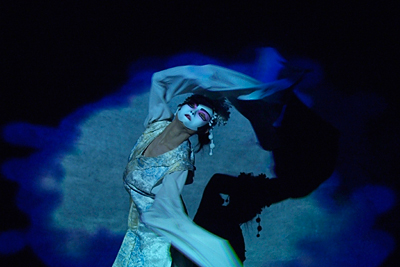 Before directing his attention back to Ex Machina’s business, Côté offered this final assessment of his Lectrosonics experience. “Colin Bernard, Lectrosonics’ Director of Canadian Operations, and the entire Lectrosonics Toronto-based team are always eager to assist,” explains Côté. “I found everyone in Toronto very efficient and ready to answer our questions, which is always enjoyable. I try to not send emails to Colin late at night because it seems his Blackberry is always on and he answers his email around the clock!”

For more information about Ex Machina, visit the company online at www.exmachina.qc.ca. For more about Jean-Sébastien Côté, go to his website at www.jscote.com.