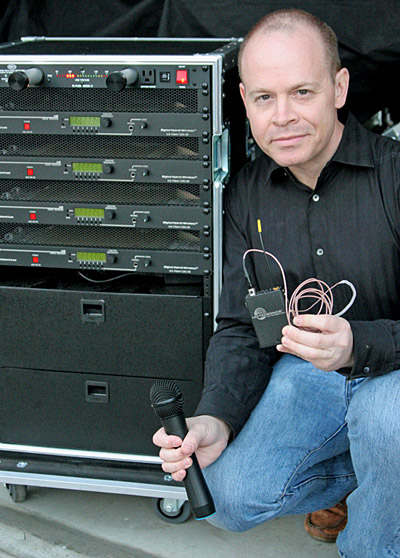 San Mateo, CA – April 2009… When it comes to student theatrical productions, San Mateo High School’s award-winning drama program is tough to beat. With strong support from the parent’s Boosters organization, the well known program presents three mainstage productions each year while educating scores of dedicated students in all aspects of stagecraft. The San Mateo High School drama program has been so successful, numerous graduates have gone on to find success both on Broadway and in Hollywood. With such an ambitious curriculum, it comes as no surprise that the program’s leadership would want the best possible equipment for its charges. So when the Boosters recently decided to invest in wireless microphone technology, they purchased a sizeable system drawn from components in the Lectrosonics catalog.

Mark Metzler, owner of San Mateo-based Brave Monkey Productions, which specializes in audio/video production and design services, serves as the San Mateo High School drama program’s sound designer and audio engineer. When tasked with selecting and deploying a new wireless system that would first be used in the rock musical Rent, Metzler quickly realized the enormity of the challenge before him.

“Rent,” explained Metzler, “is an ambitious undertaking for any theatrical group, let alone high school students. This also happened to be the first time the musical was made available for performance in schools, so it garnered a lot of attention—so much, in fact, that Anthony Rapp, who originated the role of Mark, the show’s lead character on Broadway, and film director Chris Columbus, who made the film version of the musical, both came to share their perspective with the students.”

“I knew the band would be onstage with the performers,” continued Metzler. “This told me I needed microphones that were directional and provided high gain before feedback. Further, I also needed to feel confident I could rely on the transmitters’ power output for solid, dropout free performance and long battery life. Adding to the challenges, all twenty actors with twenty wireless mic systems would be onstage simultaneously at several points in the production, so the ability to operate consistently in a crowded RF environment was critical.”

On the transmitter side, Metzler selected 20 Lectrosonics LMa Digital Hybrid UHF beltpack transmitters paired with an equal number of Countryman E6i directional earset microphones, along with a single Lectrosonics UT-VMC handheld microphone transmitter. “During testing,” said Metzler, “I found I could get upwards of five hours from the LMa’s battery. Considering that the mics needed to run for a little more than 2.5 hours during the actual performances, this was very reassuring. It was also very comforting to find that the VR Panel software—among its many functions—provides a readout of battery life, so that too, adds to one’s sense of security when running the system.”

Mark Haynes from Leo’s Pro Audio commented on the equipment selection, “It was imperative that the system be coherently designed to minimize operational clumsiness in deployment, configuration, antenna distribution, and control/monitoring. It was equally clear that a multiple conventional receiver system of this size would be difficult, at best, to deal with in an efficient manner. Given these considerations, the Lectrosonics Venue system was ideally suited to offer the right form factor to address all of these issues, and to do so in a way that was responsible in terms of the budget.”

Metzler was also very pleased with Lectrosonics’ technical support services. “Lectrosonics installed all the modules into the Venue receivers prior to shipment,” said Metzler. “This saved me a considerable amount of time as I was getting the theater group up and running. The entire process of obtaining this system—both in my dealings with Mark at Leo’s as well as the folks at Lectrosonics—was a genuinely positive experience. The service from both companies was exceptional.”

With everything up and running, Metzler reports receiving compliments from everyone involved in the production of Rent. “Everybody commented on the new system’s incredible performance,” notes Metzler. “I’ve worked with a lot of wireless equipment over the years, and Lectrosonics is first-rate. During the ordering process, I gave the folks at Lectrosonics the geographic location where the equipment would be used, and they actually configured the equipment for what they believed would be the best frequencies. Straight out of the box, the equipment worked flawlessly and the sound quality was incredible. There wasn’t a single issue that complicated this large and involved wireless setup. This was a jaw-dropping experience. I was delighted with the entire process.”