Lectrosonics On Location With Destination Nord'Ouest 2

Wireless equipment gets down and dirty re-tracing explorers’ historic journey 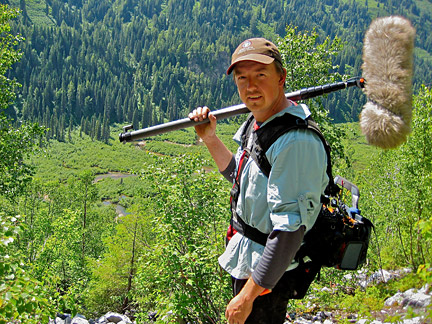 Ottawa, Ontario, Canada – March 2009… The journey of Alexander Mackenzie—the first European to cross North America by land —was recently chronicled for a forthcoming documentary titled Destination Nord'Ouest 2, to be aired this spring by French language broadcasters TVA of Montreal and Toronto’s TFO. Co-produced by independent film and television production companies R. Charbonneau Productions of Ottawa and Les Productions Rivard of Winnipeg, Destination Nord'Ouest 2 employed two camera/sound crews and featured a journey of 1200 miles by canoe and 250 miles on foot over the Rocky Mountains across Alberta and British Columbia and down into the Bella Coola Valley on the Pacific Coast. Following the path of ten ‘voyageurs’ as they re-created the arduous trek meant travelling un-supported for as many as 12-13 days with only an occasional air drop for food. This journey gave new definition to the term remote—and for sound, it wouldn’t have happened without the rock solid performance attributes of Lectrosonics.

Simon Paine, a freelance production sound mixer who has handled location sound for everything from dramas and documentaries to reality shows and news, was contracted to serve as Location Sound Supervisor and Mixer for Destination Nord'Ouest 2. Paine, whose past projects include Canadian Idol and From the Ground Up: with Debbie Travis described a production environment that put both the crew and their equipment through the most trying conditions he has ever faced as they captured the material that will ultimately be assembled into eight 1-hour episodes.

“The on the water part of the trip was by far the most demanding on the equipment,” explained Paine. “The explorers were in the water daily – sometimes up to their chests. In the first season, the producers encountered difficulties with the sound because, knowing that the transmitters would be subjected to water, they were reluctant to place transmitters on the subjects. The director wanted equipment that could withstand the extreme conditions they’d be working in for season 2”

The MM400C transmitters certainly saw their share of water, as Paine explained. “Not only did the voyageurs routinely expose the gear to water,” said Paine, “at one point, both I and the other sound engineer fell into the water. My equipment bag was completely submerged. After retrieving the gear, I started a fire and proceeded to let all the equipment dry out. After almost two hours, everything seemed to be physically dry, so I started turning the equipment back on. Fortunately, every receiver and transmitter powered up flawlessly. If the gear hadn’t worked, I would have been toast, since the only way out to civilization and more gear, was a 5 day hike.”

Paine was similarly impressed with the performance of the R1A beltpack IFB receivers and with the ease of identifying and selecting open frequencies for all the wireless equipment. “Since there were two sound mixers (one for each cameraman), I knew that if I went with the R1A’s, I could pre-program them so that the director—who would frequently go back and forth from one camera crew to the other—would be able to easily monitor what each team was doing. Similarly, I used IAS software by Professional Wireless Systems for frequency coordination. As we crossed through all the little towns in the Rockies, I entered the coordinates where we were going, and was amazed by how much RF existed in what seemed like the middle of nowhere. This software, which is recommended by Lectrosonics, proved extremely valuable.”

By the time his portion of the project was completed, Paine’s Lectrosonics equipment had gotten both wet and dirty. “It was definitely time for some routine servicing,” said Paine. “I sent the equipment to Lectrosonics’ Toronto-based service facility and, in just a matter of three or four days, everything came back looking like new. I was very impressed.”

With the project now in post production, Paine was quick to point out that he has received numerous compliments about the quality of sound he provided. “Everyone has been very pleased,” reports Paine. “I’ve received nothing but praise from both the director and the post mixers. Best of all, the production company has called me for another project coming up in the months ahead. When one job leads to more projects, that’s the best compliment of all.”

Destination Nord‘Ouest 2 will air starting in April 2009 on TVA.

Simon Paine is a freelance production sound mixer. For more information about him and his services, contact him at www.soundguy.ca.