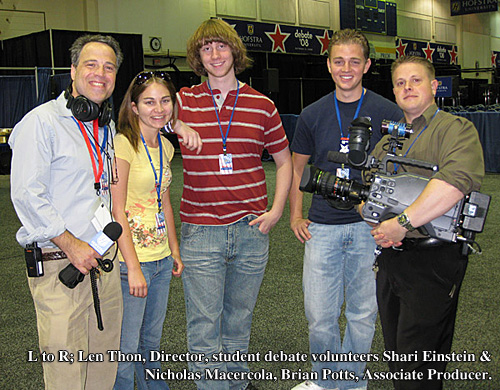 Hempstead, NY… While it’s been several months since the Presidential Debates between Barack Obama and John McCain took place, the nation’s academic community will use these debates to foster greater understanding of the political process for quite some time. What better way to grasp the intricacies of our nation’s political system than to study these historic events? For Hofstra University—the site of the third and final Presidential Debate—this momentous occasion fostered a yearlong political science program, Educate ’08, which culminated on October 15, 2008, the day of the Debate. Capturing the excitement surrounding the “main event” was a huge task for the University’s production group, and to help make it all possible, they deployed wireless microphone technology from Lectrosonics.

Len Thon, Director of Hofstra Multimedia Productions, a production unit within the University’s public relations department, said “Our area is normally tasked with producing broadcast quality video designed to promote the University’s various academic programs, but the Presidential Debate was a major event unlike any I’ve seen in at Hofstra. It was a huge two-pronged affair. Not only did we have the actual debate taking place in the David S. Mack Sports and Exhibition Complex,” explained Thon, “there were also numerous other activities involved under the umbrella program called ‘Debate ’08,’ including five viewing centers around campus where students watched the debate live. We had two crews to cover the action—including in some cases, student reporters from Hofstra’s School of Communication; one for the actual debate area and another to cover the other campus activities. Our mission was to produce packages for web about various Debate ’08 related activity throughout Hofstra’s campus, as well as capture all for historical archive and promotional purposes.”

Using drapes, carpeting, huge panels and lighting trusses, the David S. Mack Sports and Exhibition Complex underwent a major transformation for the Debate—becoming a far more intimate space in the process. “Per the instructions of the Commission on Presidential Debates,” said Thon, “the arena became a completely different venue. Along the rear of the Debate Hall, a large platform was constructed for the media. This is where all the network cameras and related technical operations were positioned. Though our feeds were for field packages and not a part of the network audio pool, our wireless gear was right there in the thick of it. In addition to the network feeds, there were multiple cell phone repeaters that the mobile carriers installed. Describing this as an RF rich environment is an understatement...it was swimming in RF!”

The two Hofstra camera crews were outfitted with identical Lectrosonics systems employing the company’s highly regarded Digital Hybrid Wireless® technology. Each setup included an SR Dual-Channel Slot Mount ENG Receiver, a UCR411a Compact Receiver, and a UM400a UHF Belt Pack Transmitter. Digital Hybrid Wireless technology uses a proprietary algorithm to encode 24-bit digital audio information with no compression and low distortion into an analog format that can be transmitted in a robust manner over an analog FM wireless link. The result is much higher dynamic range—free from sonic artifacts— than wireless systems using a compandor are able to offer. 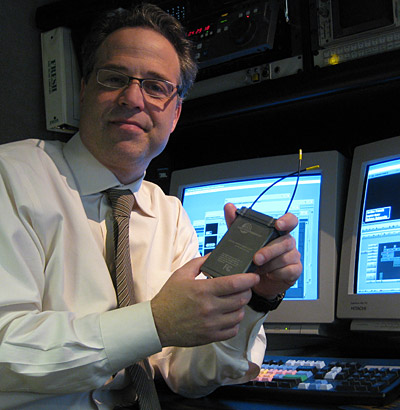 Reflecting on the Debate, Thon commented on various attributes of the Lectrosonics equipment. “The Lectrosonics gear delivered rock-solid performance,” states Thon. “I found the gear to be easy to operate and absolutely fumble free. This was literally a set-it-and-forget-it affair. We experienced no interference from other wireless equipment, nor did we create any issues for other wireless users. Lectrosonics’ equipment is extremely well made and robust. Throughout the entire day, the gear delivered rock solid audio. This equipment is exactly what you want in critical applications where there is no opportunity to do a second take. I could not have been happier with the way the Lectrosonics equipment performed.”