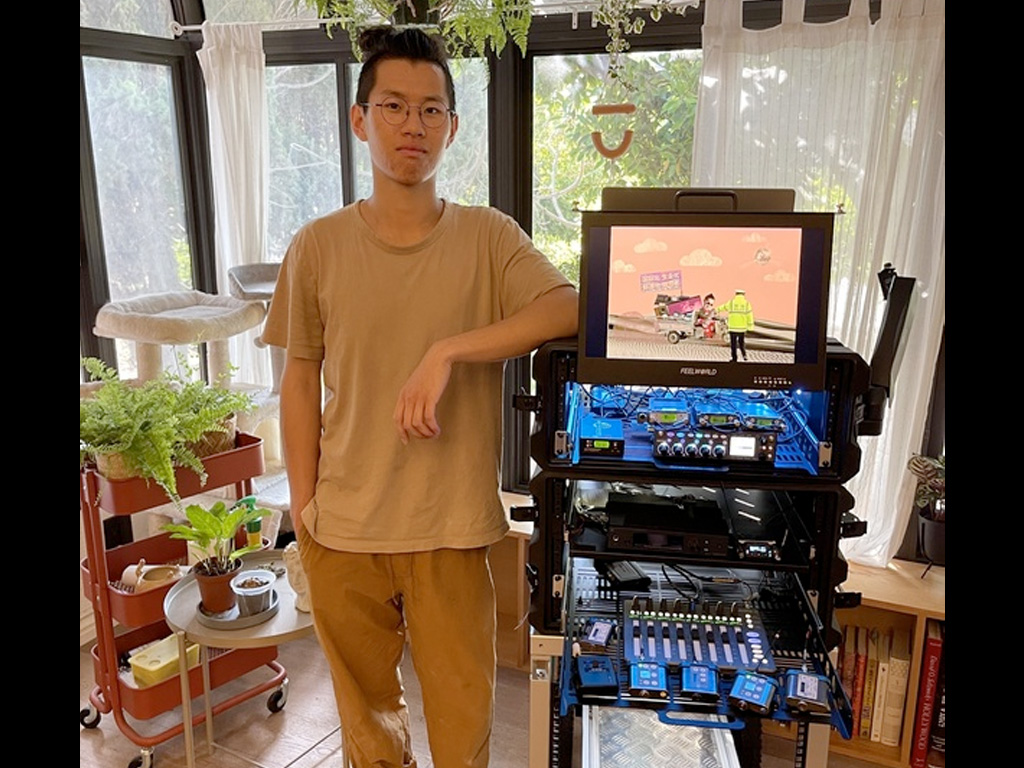 “The reliability is why I don’t think I’d ever use anything but Lectrosonics.”

Los Angeles, CA (September 6, 2022) — At the intersection of traditional video production and cutting-edge digital storytelling lies Jzoo Studios, a collective focused on location sound and post-production. Headed up by Shiheng “Jedy” Xu, their clients have included heavy hitters like Autodesk, Google, Goldman Sachs, and Intel, to name a few. Their work on a ad campaign with golf champion Collin Morikawa helped Fortune Brand Studio win ten 2021 Telly Awards, and they handled sound for a live stream in which Spider-Man: No Way Home star Tom Holland interacted from L.A. with the Italian press in Rome — as a hologram. Throughout it all, they have turned to their stable of Lectrosonics wireless gear, from time-tested SRb and SRc receivers paired with SMQV and LT transmitters, to a recently acquired DSQD digital receiver.

“We do a lot of corporate work rather than narrative fiction,” says Xu. “But we’re attracted to projects that involve a narrative story, a human story.”

Sponsored by Zurich Insurance, “The Sky’s the Limit” chronicles Collin Morikawa’s upset victory during the final round of the 2020 PGA tour. Xu found Lectrosonics’ range performance at TPC Summerlin in Las Vegas, just as worthy of a place on the leaderboard. “I had an SMQV on Collin and was picking it up with an SRC,” recalls Xu. “We went out on the golf course and recorded him swinging as well as a bunch of other Foley of the sounds of him playing. Then we interviewed him where I used the LT as a hop to send sound to all the cameras equipped with IEMs. We had to be some distance away from him and everything was just on the whip antennas. I’ve always trusted the great range of the SMQV on whips and its reliability. It passes through bodies and walls just fine at a distance.”

Next, the Spider-Man virtual press junket with Tom Holland was a live stream Q&A, so there was no wiggle room for anything to go wrong. “We were on a stage in Los Angeles and broadcasting to Rome, where Tom was appearing as a hologram,” Xu explains. “It was this crazy-big international production with crew in Los Angeles, London and Rome. I was rocking an SRb, an SMQV, and an LT. The LT was a backup in case the other channel had any problems — which it didn’t. I was using the ALP620 fins as well, which have always worked great for me in any scenario. My role was to send the feed of Tom’s microphone into the main streaming rig.”

It turns out that Xu was virtually the only one on set not to be visited by gremlins. “There were problems in Rome and in LA with video, lighting, cameras, and having sufficient bandwidth to broadcast a huge 3-D image of Tom Holland across an ocean. There were no problems with audio, which made me look pretty good! Again, the reliability is why I don’t think I’d ever use anything but Lectrosonics.”

Most recently, Team Jzoo found itself on one of its most channel-dense shoots ever, for which they brought in their new DSQD receivers paired with Wireless Designer software. “We just did this shoot that involved around 13 people plus a wireless boom,” he describes. “The content is about a hypnotist trying to hypnotize a large group of people for Offline TV, a popular YouTube collective started by a bunch of famous Twitch streamers. We were using DSQDs, one SRb, three SRcs and the boom. Wireless Designer made it easy to scan and coordinate all the frequencies for the SMQV and SMDWB transmitters. Everything got set up super-fast.

“Using the Dante connectivity of the DSQD, all the transmission was then run into an Allen & Heath SQ5 digital mixer, then the recorder,” he continues. “This was one of my first experiences mixing and through Dante and with such a high wire count in a confined room, and I was blessed with no dropouts or inter-modulation issues. This speaks greatly to the quality of Lectro gear. I should mention that none of this would have been possible without my co-mixer Shaun Yee from True Peak Soundworks, who set up 90 percent of this configuration. Shaun and his team strongly believe in Lectrosonics as well.”

Xu has forged an unconventional path for Jzoo Studios, and with that comes unconventional wireless applications, for which he finds Lectrosonics to be more than up to the task. “I don’t think a lot of people do this,” he says, “but I use Lectro for sound design and to record sound libraries. This usually involves my DPA 6060 mics and a smaller recorder. I can place transmitters on the mics and put them in a location where I want to record ambient sounds — traffic, nature, anything one might need for post. It’s much more convenient than running a cable. I sell these sound libraries as well, so they need to be top-notch for other people’s use, not just my own. Lectrosonics’ sound quality makes that possible because it’s so fantastic. I sometimes even think I can tell when I watch certain TV shows or commercials if it was used. I’m like, ‘Yup, that sounds like Lectro!’”