Sound quality and ease of operation ideal for live performance 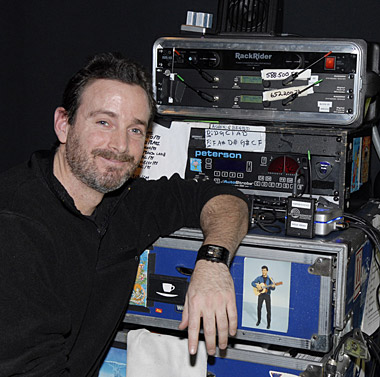 Rio Rancho, NM… In support of her critically acclaimed and most recent album release Watershed, Grammy® Award winning Canadian singer/songwriter and producer k.d. lang has spent the better part of 2008 on the tour circuit. From Nashville tearjerkers to Tin Pan Alley torch songs, from playful cow-punk tunes to sultry, grown-up pop, k.d. lang’s music offers something for everyone and all of this is reflected on the Watershed 2008 tour. In addition to her commanding vocal presence, lang is playing more guitar than ever during her shows, and every time she straps her acoustic on, her performance is being transmitted to the sound reinforcement system via a wireless setup from Lectrosonics.

Doug Redler, who since January, has been guitar technician and stage manager for k.d. lang, reports Lectrosonics equipment plays a vital role in the show—not just for lang, but also for guitarist Grecco Buratto. Redler, who previously worked with the Dixie Chicks, the B52s, Counting Crows, The Black Crowes, and Billy Idol, recounted the events that led to Lectrosonics becoming an integral part of lang’s show.

“k.d. is playing guitar more than ever on this tour—generally 6 songs per show,” said Redler. “She moves around on stage a lot and cables are, obviously, very restrictive. For this reason, she wanted to go wireless. She also wanted Grecco to use a wireless system, as he is frequently out front with her. I had a very positive experience using Lectrosonics equipment when I was working with the Dixie Chicks, as did the show’s sound crew. So when k.d. decided to go wireless, I knew from experience that Lectrosonics equipment was the best possible choice. Of equal importance, Gary Stokes, the show’s FOH engineer, insisted that Lectrosonics was the only gear he considered up to the task.”

For the current tour, k.d. land and Grecco Buratto are equipped with Lectrosonics MI33A active guitar cables, IM UHF Digital Hybrid Wireless™ beltpack transmitters, and R400A Digital Hybrid Wireless diversity receivers. Lang uses one system for her acoustic guitar, Buratto has a second system for his guitar rig, and a third transmitter is used on a banjo that lang plays during the show.”

Redler reports that while k.d lang was very open to the idea of using a wireless setup, Buratto was not as easily convinced. “Grecco was very opposed to using a wireless system because of some prior bad experiences,” recalled Redler. “He just hated the way his guitar sounded with systems that use companding. I brought the Lectrosonics system to him, we hooked him up, after which he played a single chord and everything changed right there and then. Grecco gave me a big smile and said, ‘I love it!’ He’s been using the system ever since and is very pleased with the sound and performance it provides.”

Unlike many competing systems, Lectrosonics’ wireless equipment does not employ companding. Lectrosonics’ Digital Hybrid Wireless technology uses a proprietary algorithm to encode 24-bit digital audio information with no compression and low distortion into an analog format that can be transmitted in a robust manner over an analog FM wireless link. The result is much higher dynamic range—free from sonic artifacts— than wireless systems using a compandor are able to offer. Digital Hybrid Wireless technology delivers long operating range, graceful signal decay, and a small spectral footprint, facilitating more channels to be operated simultaneously.

In addition to the pristine audio quality and freedom of mobility the Lectrosonics wireless systems afford lang and Buratto, Redler is also very fond of Lectrosonics’ SmartTune™ auto frequency selection feature. “The SmartTune feature of this equipment makes the entire system really easy to use,” notes Redler. “With the press of a single button, the receiver tells you the best frequency for your current location, and then you simply adjust the transmitter to match. I have tremendous confidence in this feature. It’s worked great in Australia, New Zealand, and all over Europe. Throughout all our travels, I’ve never experienced a single problem. The system even advises you to check the frequency as a means of ensuring the best possible performance.”

As he refocused his attention back to the rigors of the road, Redler offered this parting thought, “Both k.d. and Grecco have become very fond of their Lectrosonics systems. k.d.’s acoustic guitar sounds terrific and both performers have the freedom of mobility they wanted. We’ve used the gear on hundreds of shows around the world and haven’t encountered a single problem. The sound quality is excellent and that makes everyone happy, which makes my job easier. Right out of the box, the Lectrosonics systems are great to work with. Lectrosonics makes the easiest to use, best sounding wireless gear available.”

For additional information about k.d. lang, visit her online at www.kdlang.com.