From Musicmaking to Mixing Hit Series: Joe Foglia on Life with Lectrosonics 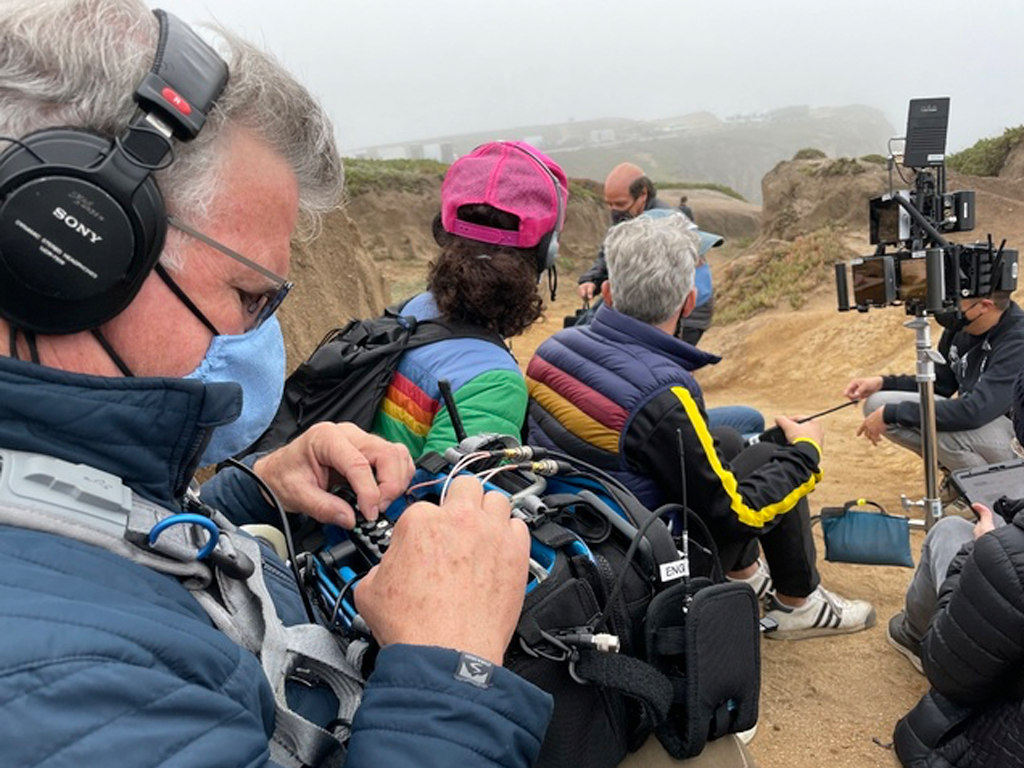 Lectrosonics works properly every day. What else can you say that about besides a refrigerator you still have from 1979?”

Miami, FL (April 12, 2022) — Joe Foglia is a different sort of production sound mixer, having cut his teeth on music recording at Miami’s renowned Criteria Studios, where he engineered or assisted on recordings by Black Sabbath;  Crosby, Stills, and Nash and many other celebrated musical artists. His film and TV credits include the ’80s-defining series Miami Vice, for which he earned an Emmy nomination for best sound. Joe and his own remote mobile production company, Southeast Audio ADR, have traveled the country to work on hits like Marley and Me, Scrubs, and It’s Always Sunny in Philadelphia. A lifetime Lectrosonics user, Foglia has recently adopted the all-digital D Squared line, including five DSQD four-channel receivers, two DCR822 compact dual-channel receivers, M2T transmitters for IFB, and an arsenal of all-digital and Digital Hybrid packs — the latter being receivable by the D Squared systems.

Foglia spoke with us about his career, his gear and approach to his craft.

What are you currently working on in Miami?

The last show in Florida that I did was in 2019 — The Right Stuff for Apple TV, about the American space program. So, when I was on Scrubs for nine seasons in L.A., the showrunner was Bill Lawrence. He’s a very forward-thinking producer and comedy writer and created the comedy-drama series Ted Lasso. Scrubs became a tight-knit family, but I hadn’t worked with Bill again until now. We are working on a new show for Apple TV that will be announced soon. I emailed Bill asking if I could join the show. The next day I got a call from the production manager telling me I had the gig.

Give us a brief history of your music background. Does it affect how you listen or how you approach film and TV sound?

It has certainly had a major influence on my career. I think it channeled me into my current work in a different way than much of the younger generation, who are jumping into production sound because there’s currently a lot of work.

I started out in technical school for three years in Coral Gables, working with mainframe computers. I hooked up with a guy there, Peter Yianilos, and later we found ourselves working at a firm building computers for NASA’s Jet Propulsion Laboratory. We left at the same time to go work for MCI — not the phone company but the one that made 24-track tape machines and recording consoles. They were eventually bought by Sony, but Peter and I decided we wanted to put together a remote recording truck. We gutted an old GMC motor home and put two 24-track recorders and an MCI console in there. We did several concerts back in the day, a lot of Southern rock like The Outlaws and Charlie Daniels.

What happened in remote concert recording that benefitted your work in film?

When I worked at Criteria, they built another truck, and we did some live remotes for CBS, who were introducing live music into their New Year’s specials. That’s where I first got experience in the different signal needs of different “customers” — our own recording, broadcast, the live concert sound in real time, and so on. Some of what I already learned translated well.

How did the transition into film and TV production sound happen?

Mack Emerman, the owner of Criteria, gathered us all into his office one day. He held up a CD and said, “This is the future.” He was obviously concerned about how it might affect the industry, being a guy who had his own vinyl-cutting lathe. I took that as a cue and started venturing out to do sound on commercials. I bought my first Nagra field recorder second-hand for $300. A friend I’d made at Criteria, Mike Harris, was a high-end equipment dealer and is still a staple in Miami. He introduced me to UHF wireless, which I started bringing out on remotes for sporting events, the Daytona 500 race, all kinds of things.

What was your first film?

A breakdance movie called Knights of the City. It was produced by a mafia boss whose son wanted to get into making movies. It had all kinds of cameos — Smokey Robinson, Sammy Davis Junior — because of the connections this guy had. And there I was, oblivious to the whole thing.

Speaking of organized crime, we have to hear a story about Miami Vice.

Hah! I got that gig at season 3 because they wanted someone local to work on it, not someone from L.A. or New York they’d have to fly in and put up. I actually knew Don Johnson because he used to hang around Criteria when the Allman Brothers recorded there. He co-wrote some songs with Dickey Betts. Vice was a huge springboard for my career. It still opens doors. The nice thing is, a lot of people I worked on that show with are now on.

How did you first encounter Lectrosonics?

I had been using Sony through Miami Vice because it was state-of-the-art at the time. I had four channels and that was it. When Peter and I started moving over to other shows, we switched to the Lectrosonics 185s, the VHF units with the very long antennas. We had several of those plus the quad-packs. Fast-forward to going to L.A. to do Scrubs. It was Glen Trew [of Nashville studio and equipment dealer Trew Audio] who first got me to move to the original Venue system. We took over an actual hospital building for Scrubs, and the Venue worked flawlessly in that environment throughout the entire series. After we wrapped, I upgraded to the Venue2. At one time or another, I’ve had almost everything Lectrosonics makes.

What is the highest number of frequencies you’ve had to coordinate?

I just finished the second season of Rutherford Falls, a comedy starring Ed Helms. We went all the way up to 12. I tend to be an overkill kind of guy, doing more than is strictly needed. One way that shows up is that if someone even has a small speaking part, they get their own body pack. Fortunately, actors are more comfortable keeping them on these days, partly because the Lectro transmitters are so light and compact and partly because it’s more a part of the culture now. On Miami Vice, Don Johnson would only wear his wire for the duration of, say, a wide shot, then take it off. Everything else had to be covered by the boom and plant mics.

We haven’t talked about transmitters much yet. Your thoughts?

There are no weak points about Lectrosonics’ packs at all. We use single-battery versions like the SMV and DBSM, and get six hours of battery life. We only change the batteries at lunch. Lectro just keeps improving range and resistance to interference. That said, in my philosophy the transmitter is just a radio that blasts out what it blasts out. The receiver is really doing all the heavy lifting when it comes to finding clean frequencies and holding onto them.

Have you tried the Wireless Designer software for that task?

I depend on it every day, in fact. I begin every shoot by scanning with it. Here’s the thing. Some of Lectro’s competitors brag about frequency-hopping. I find that Wireless Designer makes it pretty much unnecessary. Also, it tends not to spread frequencies around the available spectrum of 470 to 608 MHz. When it finds a hole, it clusters channels there. I think Lectrosonics did a lot of work to make Wireless Designer function perfectly. Every time you hit it, it makes sure there are no conflicts. Of course, it’s the DSQDs and 822s that make all this possible — like I said, it’s all about your receivers.

Do you find any other features of the D Squared receivers especially convenient?

You can get them with AES or Dante output. I have mine in Dante because it makes it easy to remote the wireless part of my rig from the rest of my cart. Let’s say a scene is on top of a building and for some reason I can’t be up there. My receiver rack is set up so that I can pull it from my main cart, send it up, and have them throw me one Ethernet cable to feed my Cantar Mini recorder and the laptop I run Wireless Designer on.

One Ethernet cable sounds a little fragile in a production situation …

I have what are called tactical cables a company called Elite Core Audio will make in any length. They have locking barrels around the Ethernet connectors, like an XLR mic cable. They’re very sturdy.

Which brings us to durability, something we like to hear stories about when it comes to our gear, especially anything worn on the body.

Oh, I’ve got ’em! On Rutherford Falls, we had digital wireless on Ed Helms. They were wetting him down for a scene, but I didn’t know they were going to use a fire hose! Actors are also constantly dropping packs in the toilet because they’re already on your belt and easy to forget about when you use the restroom. They’re quick about pulling them out, and if you remove the battery and dry them thoroughly, there’s almost always no problem.

You mentioned the younger generation of sound mixers earlier in this interview. Do you have any advice for them?

Not so much advice as a rule of thumb. I learned in my studio days that some things, like good microphones, don’t become obsolete. However, professionals should turn over their wireless equipment every five years or so. Not only because innovations like the D Squared system happen, but so younger people in the beginning of their careers get a relatively affordable shot at knowing what great gear really is. Make your money using your gear, take all the depreciation you can, and flip it to the next person behind you.

Why would you recommend those beginning mixers go for Lectrosonics, even pre-owned?

Because Lectro is serious about what they do, but also one of the more accessible companies out there. I could call [company president] Gordon Moore today and make a suggestion, and he’d listen. They also almost never obsolete their products and stop supporting them — nearly all of their competition does that more much often. You’ve gotta take care of the people who take care of you, and Lectrosonics does. It turns on and works properly every day. What else can you say that about, besides a refrigerator you still have from 1979?